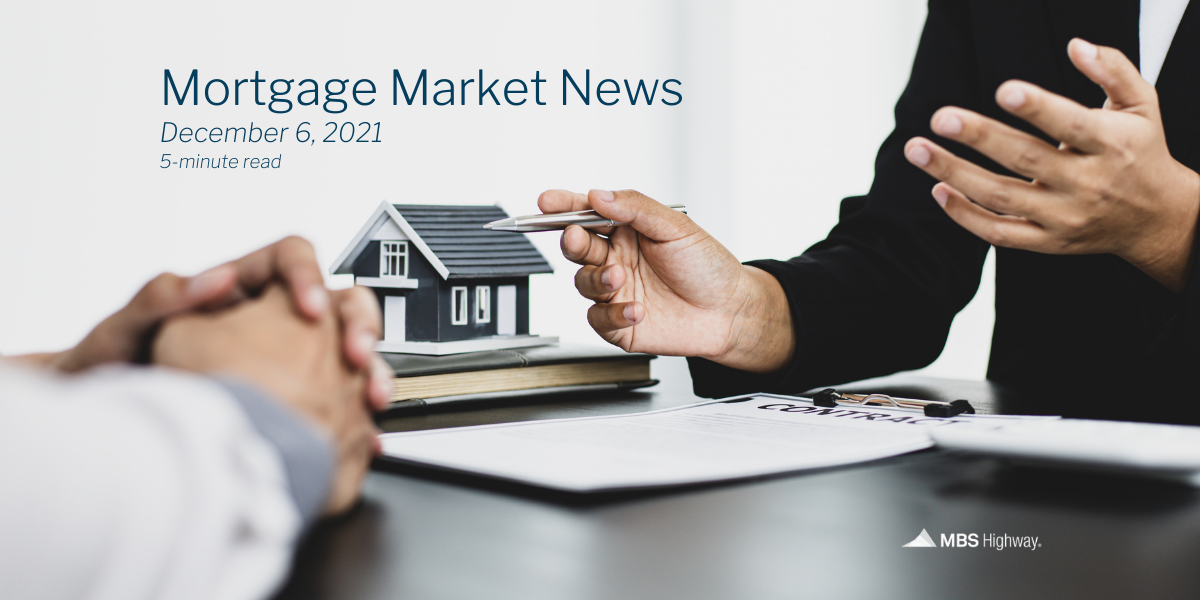 There were some mixed messages regarding November job creations while home prices continued to rise in October. Plus, the new Omicron COVID variant and Fed chatter regarding inflation led to volatility in the markets. 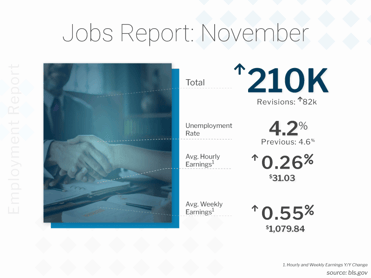 The Bureau of Labor Statistics (BLS) reported that there were 210,000 jobs created in November, which was much weaker than the 550,000 new jobs that were expected. However, there were positive revisions to the figures for September and October adding 82,000 new jobs in those months combined, which makes up for some of the miss.

Yet this was a tale of two reports, as there are two surveys within the Jobs Report and there is a fundamental difference between them. First, the Business Survey is where the headline job number comes from and it's based predominately on modeling. Part of this modeling is the birth-death ratio that factors in the birth of new businesses and the death of businesses, adding or removing the typical number of jobs in those types of businesses when performing the calculations. However, this methodology may be a bit more flawed in today’s market because people are returning to positions that were vacated during the pandemic, so it’s less about new businesses being created and more about new jobs being created.

The Household Survey, where the Unemployment Rate comes from, is done by actual phone calls to 60,000 homes. The Household Survey also has a job loss or creation component, and it showed there were 1.14 million job creations, while the labor force increased by almost 600,000. The number of unemployed people decreased by 542,000, causing the Unemployment Rate to fall from 4.6% to 4.2%.

In addition, it’s important to note that there has been a lingering misclassification error where people were classified absent from work for other reasons and not marked as unemployed on temporary layoff when they should have been. When we factor this into the calculations, the Unemployment Rate should have been around 0.1% higher at around 4.3%.

Average hourly earnings and average weekly earnings were both up roughly 5% year over year. Wage growth is running even hotter if you annualized the pace over the last 6 months. 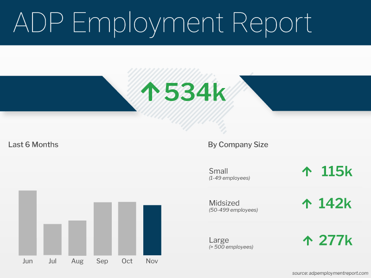 The ADP Employment Report, which measures private sector payrolls, showed that there were 534,000 jobs created in November, which was in line with expectations. October’s figures were revised slightly lower by 1,000 to 570,000 new jobs in that month.

Both goods-producing and service-providing sector companies showed gains, with services contributing the majority share at 424,000 jobs. Leisure and hospitality saw the most job gains with 136,000, followed by professional and business at 110,000, and trade, transportation, and utilities at 78,000. On the goods-producing side, construction also showed strong gains at 52,000.

The bottom line is that of the 19.6 million private sector jobs lost in March and April 2020, we’ve since recovered about 15 million of them. 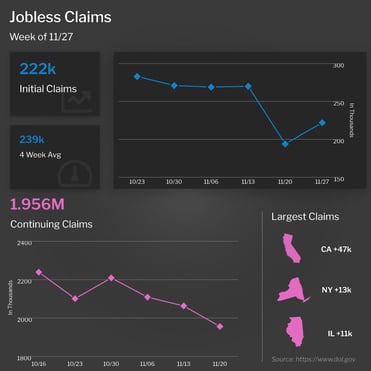 The number of people filing for unemployment benefits for the first time increased by 28,000 in the latest week, with Initial Jobless Claims reported at 222,000.

However, this figure is coming off the lowest reading in 50 years, so the bounce higher was expected.

Continuing Claims, which measures individuals who continue to receive benefits, decreased by 107,000 to 1.956 million, once again reaching a pandemic-era low.

There are now 2.3 million people in total receiving benefits, which is a healthy number and in stark contrast to the 20 million plus seen last year. 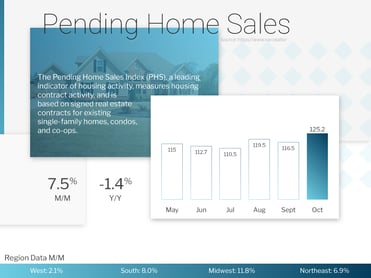 Pending Home Sales, which measures signed contracts on existing homes, came in much stronger than expectations, rising 7.5% in October. Sales are now down 1.4% year over year, which is quite impressive considering the lack of inventory, tough comparisons to last year’s market due to the pandemic, and the fact that rates have risen.

The National Association of Realtors chief economist, Lawrence Yun, stated, "Motivated by fast-rising rents and the anticipated increase in mortgage rates, consumers that are on strong financial footing are signing contracts to purchase a home sooner rather than later." He added, "This solid buying is a testament to demand still being relatively high, as it is occurring during a time when inventory is still markedly low.” 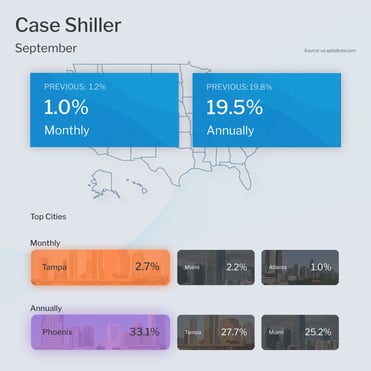 The Case-Shiller Home Price Index, which is considered the “gold standard” for appreciation, showed home prices rose 1% in September and 19.5% year over year. This annual reading was slightly lower than the 20% rise reported for August.

While home price appreciation is expected to continue, this slowing in the annual reading could suggest that the pace of appreciation is beginning to slow. Note that this does not mean that home prices will drop. It simply means that they may rise at a more modest pace. 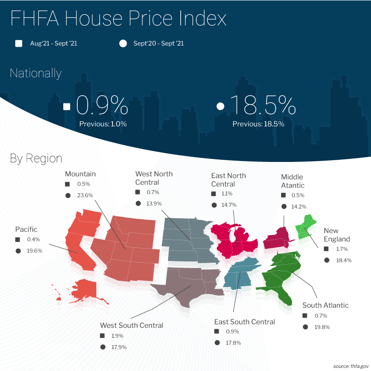 The Federal Housing Finance Agency (FHFA) released their House Price Index, which measures home price appreciation on single-family homes with conforming loan amounts. While you can have a million-dollar home with a conforming loan amount, the report most likely represents lower-priced homes, where supply has been tight and demand strong.

Home prices rose 0.9% in September and they were also up 17.7% year over year, which is down from the 18.5% annual gain reported for August. Again, we are still seeing home prices rise, but at a slightly slower pace.

The news of the new Omicron COVID variant, with the first cases confirmed in the US, led to ongoing volatility in the markets last week due to the unknowns regarding the number of mutations and risk of reinfection.

The Fed also made headlines, as Fed Chair Jerome Powell retired the word “transitory” in regard to inflation, testifying before Congress that the risks of inflation have now increased. He also said that inflation pressures will linger well into next year.

Remember, inflation is the arch enemy of fixed investments like Mortgage Bonds because it erodes the buying power of a Bond's fixed rate of return. If inflation is rising, investors demand a rate of return to combat the faster pace of erosion due to inflation, causing interest rates to rise. Though many factors influence the markets, it’s always important to keep an eye on inflation.

Job creations were strong in February, while comments from the Fed and ongoing fear and uncertainty...