Consumer inflation and home prices are on the rise, while low inventory continues to impact homebuyers. Plus, there was good news from the labor sector, as Initial Jobless Claims reach their lowest level since the pandemic began.

Also of note, the second reading on first quarter GDP came in at 6.4%, which was just slightly below estimates and unchanged from the advanced reading. It makes sense that we are seeing a high level of GDP after the recent stimulus package.

The Fed’s favored measure of inflation, Personal Consumption Expenditures (PCE), showed that headline inflation was up 0.6% in April, which was in line with estimates. Year over year the index increased from 2.4% to 3.6%, which is the hottest reading in 13 years!

Core PCE, which strips out volatile food and energy prices and is the Fed's real focus, was up 0.7%, which was higher than the consensus of a 0.6% increase. Year over year, Core PCE increased from 1.9% to 3.1%.

Part of the reason for the increase in the annual comparisons is that readings for the more current months are replacing the readings from 2020 when much of the economy was shut down due to the pandemic.

Though many factors impact the markets, inflation data is especially crucial to monitor because of this dynamic, and I will be keeping a close eye on May's inflation numbers when they are reported in June. For example, if May shows just a 0.4% reading, it will replace a 0.1% reading from May of last year, and cause year over year Core PCE to reach roughly 3.4%!

Also of note within the report, Personal Income fell 13% in April after jumping 21% in March, which was right after the latest stimulus checks were dispersed. Personal Spending started to level off in April, ticking up 0.5% after rising 4.7% in March. The savings rate declined to 14.9% after jumping 28% in March. These figures all make sense, as many people both spent and saved more in March after they received the stimulus payments.

New Home Sales, which measure signed contracts on new homes, were down nearly 6% in April. However, this comes after a nice bounce higher in March, so if we smooth out the numbers, sales in April were up about 1% from February.

Looking at inventory levels, there were only 316,000 new homes for sale at the end of April, which represents a 4.4 months' supply of homes.

The median home price was reported at $372,000, which is up 11% from March and 20% from April of last year. While these are huge numbers, remember the median price is not the same as appreciation. It simply means half the homes sold were above that price and half were below it. Builders are not building many lower-priced homes and as a result, the median home price is being dragged higher. 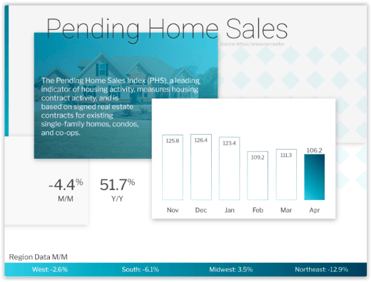 Pending Home Sales, which measure signed contracts on existing homes, also declined in April, falling 4.4% from March. This is all due to a lack of inventory because the demand to buy homes is there. Pending Sales are up 51% compared to April of last year, but that figure is skewed because the lockdowns from the pandemic last spring greatly limited people going out and signing contracts.

The Case-Shiller Home Price Index, which is considered the “gold standard” for appreciation, showed home prices rose 13.2% year over year in March. This is a 15-year high and even stronger than the 12% annual appreciation in the previous report!

The Federal Housing Finance Agency (FHFA) also released their House Price Index, which measures home price appreciation on single-family homes with conforming loan amounts. Note that while you can have a million-dollar home with a conforming loan amount, the report most likely represents lower-priced homes, where supply is tightest and demand is strongest.

Therefore, it should be no surprise that the data was even stronger than what Case Shiller reported. Home prices rose 1.4% from February to March and they were up 13.9% year over year, which is higher than the 12.3% annual appreciation in the previous report. 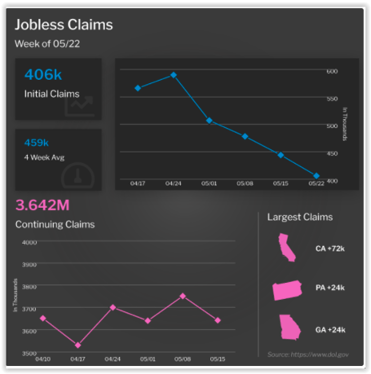 The number of people filing for unemployment for the first time fell 38,000 in the latest week, as there were 406,000 Initial Jobless Claims filed. This is the lowest level of initial claims since the pandemic began last year.

Continuing Claims, which measure people who continue to receive regular benefits, also decreased by 96,000 to 3.64 million. June's reporting will be important to monitor, as we should be able to gauge the impact of some states backing out of the extended benefits program.

Pandemic Unemployment Assistance Claims (which provide benefits to people who would not usually qualify) and Pandemic Emergency Claims (which extend benefits after regular benefits expire) decreased by roughly 40,000 claims combined.

All in all, 15.8 million people are still receiving benefits throughout all programs, which is a decline of 175,000 from the previous week.

The latest Personal Consumption Expenditures report showed that inflation continues to rise, while...

August brought disappointing news from the labor sector, as job growth was much lower than...