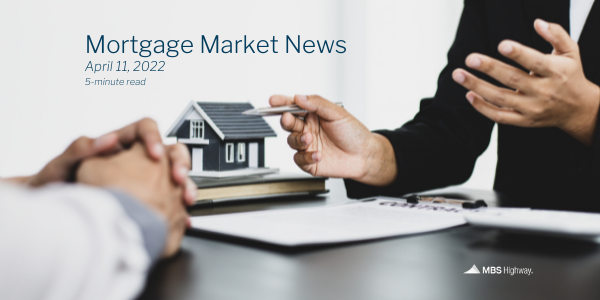 Reports on home appreciation and jobless claims highlighted an otherwise quiet economic calendar, but it was the Fed and recession talk that really made headlines.

Breaking Down the Fed Minutes

The minutes from the Fed’s March 15-16 meeting were released last week. Before breaking down all the details, it’s important to remember that the Fed began purchasing Treasuries and Mortgage-Backed Securities (MBS) back in 2020 during the heart of the pandemic to stabilize the markets and aid in our recovery.

But as inflation heated up last year, the Fed came under pressure to start tapering, or reducing, these purchases, which has now occurred. They completed their taper and are no longer buying outright, but they are still buying $38 billion in MBS through reinvestments.

One of the levers the Fed can pull for tightening the economy is reducing their balance sheet (which includes the purchases of Treasuries and MBS made during the pandemic). In other words, balance sheet reduction means the Fed will allow Bonds to fall off their balance sheet and no longer reinvest in them each month. This would cause more supply on the market that has to be absorbed, which can cause mortgage rates to move higher.

In the minutes from the Fed’s March meeting, most members agreed that when the Fed begins to reduce their balance sheet, monthly caps of $60 billion for Treasuries and $35 billion for MBS would be appropriate. That is a total reduction cap of $95 billion per month.

Fed members also agreed that the caps would be phased in over a period of three months or longer if warranted. This means that they will start to reduce their balance sheet at a lesser amount and will eventually reach the $95 billion reduction over time, much like they have done in the past.

So, how disruptive will the balance sheet reduction be to MBS?

When we look at the Fed’s MBS purchases during the pandemic, at the Fed’s peak they were buying $40 billion outright and another $70 billion in reinvestments from their holdings for a total of $110 billion per month or $1.3 trillion over the course of the year.

What about supply coming to market? Originations have slowed, as last year volume was estimated to be $3.9 trillion, where forecasts are closer to $2.6 trillion this year, which is a $1.3 trillion difference.

The bottom line is this means that the balance sheet runoff may not have as big of a negative impact on interest rates as many fear because of less supply of MBS coming to market. The caveat is that this is based off the Fed’s guidance from their meeting several weeks ago and the next Fed meeting is still several weeks away on May 3-4, so things may change.

Also of note in the March meeting minutes, the Fed said it would have likely hiked their benchmark Fed Funds Rate by 50 basis points (rather than the 25 basis point hike they implemented) if it were not for the Russia/Ukraine conflict. In addition, many participants noted that one or more 50 basis point hikes could be appropriate at future meetings and may likely occur in May with inflation so high.

CoreLogic released their Home Price Index report for February, showing that home prices rose by 2.2% from January and 20% year over year. This annual reading is an acceleration from 19.1% in January and the highest reading in the 45-year history of the index.

CoreLogic forecasts that home prices will appreciate 0.6% in March and 5% in the year going forward. While this annual figure is finally moving up a bit from the 3.8% annual forecast in the previous report, it is still much more conservative than most other forecasts and they continue to miss forecasts by a large margin.

For example, CoreLogic had forecasted prices would appreciate 0.2% in February, and they actually rose 2.2%. Plus, when we look to their report from last year at this time, they forecasted that home prices would increase 3.2% annually – but they reported last week that prices actually rose 20% year over year.

Note that the 5% appreciation CoreLogic has forecasted still is meaningful. For example, if someone bought a $400,000 home and put 10% down, that means they would gain $20,000 in appreciation over the next year and earn a 50% return on their investment due to leverage. 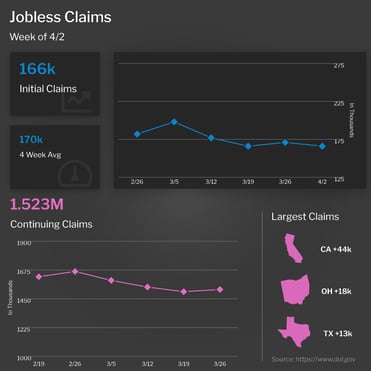 The number of people filing for unemployment benefits for the first time fell by 5,000 in the latest week, as 166,000 Initial Jobless Claims were reported. This is the lowest reading since 1968. In addition, the previous week’s number of initial claims was revised significantly lower by 31,000, from 202,000 to 171,000.

Continuing Claims, which measure people who continue to receive benefits after their initial claim is filed, increased by 17,000 to 1.523 million.

Note that the Bureau of Labor Statistics has started to use a new methodology, which has impacted their seasonal adjustments over the past five years. This resulted in big revisions lower to some of their figures, but the theme remains the same. The labor market remains tight as employers are holding on to their workers and firing less.

An Update on Important Recession Indicators

The yield spread between the 10-year Treasury and 2-year Treasury has been trending lower and has recently inverted for brief periods. Why is this significant?

Normally, you would expect to receive a higher rate of return for putting your money away for 10 years versus 2 years. But when there is an economic slowdown and fear in the markets, the yield curve can go inverted – meaning that 2-year yields are higher than 10-year yields, which is backwards or upside down. Looking back at the history of recessions, we almost always see a recession follow an inversion but it doesn’t happen right away. It could take months to a year or two for the actual recession to occur.

When the Fed hikes the Fed Funds Rate, this causes short-term yields to rise and can cause long-term yields to fall if it’s perceived that the rate hikes are getting inflation under control. Remember, the Fed hiked its benchmark Federal Funds Rate by 25 basis points at its March meeting.

Fed members are expecting six additional hikes this year according to their dot plot chart, with a 50 basis point hike expected in May. The spread between the 10-year and 2-year should continue to narrow and invert as the Fed hikes the Fed Funds Rate, and again this inversion has been a reliable recession indicator.

Note that while a recession is not a great thing for the economy, one positive aspect is that periods of recession are always coupled with lower interest rates.

Deutsche Bank has also said, "We no longer see the Fed achieving a soft landing. Instead, we anticipate that a more aggressive tightening of monetary policy will push the economy into a recession.” They are the first bank to jump on board with the belief that a recession is coming.