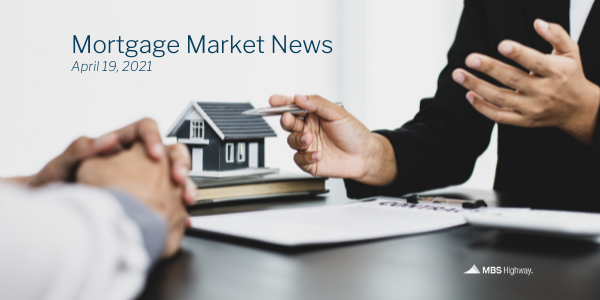 The weather isn't the only thing warming this spring, as home construction and consumer inflation are heating up. 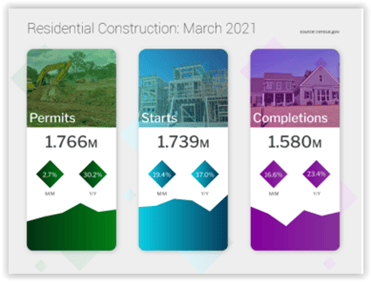 There was some good news for homebuyers struggling with limited inventory, as Housing Starts (which measure the beginning of construction on homes) were up almost 20% in March after building in February was hindered in part by bad weather. This was much stronger than expectations. Housing Starts were also 37% higher than compared to March of 2020, though this figure is skewed as builders were not building this time last year due to the pandemic.

Even more importantly, Housing Starts for single-family homes, which are in such high demand, were up 15.3% from February to March and nearly 41% compared to March of last year.

Building Permits, which measure future construction, rose 2.7% in March and 30.2% year over year; again the annual reading is skewed due to the lack of building in March of last year. Permits for single-family homes were also on the rise, up 4.6% from February to March and almost 36% year over year.

Housing units that are authorized but not yet started for single-family homes were also nearly 40% higher year over year.

Builder confidence remains strong due to the strong demand for houses around the country. The National Association of Home Builders Housing Market Index, which is a real-time read on builder confidence, rose by 1 point from March's revised figure of 82 to 83 in April. Any reading over 50 indicates that more builders view conditions as good than poor.

Of the three components in the index, current sales increased by 1 point to 88 while future sales expectations decreased by 2 points to 81. Buyer traffic increased by 3 points to 75, which is the highest level since November. This speaks to the high level of demand for houses, given that home loan rates have ticked higher since last fall.

Consumer inflation moved higher in March, as the Consumer Price Index (CPI) rose by 0.6% from February. The year over year reading also increased from 1.7% to 2.6%, which was a larger jump than expected.

Core CPI, which strips out volatile food and energy prices, was up 0.3% in March and 1.6% year over year.

Of note in the report, rents are rising 1.8% across the country, which is down from 2% in the previous report. This overall reading is being weighed down by New York and San Francisco, as many markets are experiencing much higher rent gains. And it's likely rents will start rising again in upcoming reports.

Part of the reason for the increase in the annual comparisons is that readings for the more current months are replacing the readings from 2020 when much of the economy was shut down due to the pandemic. While it's expected that April's inflation reading will also move higher, the Fed has stated that they expect rising inflation will be transitory.

Higher inflation typically drives home loan rates higher. That's because inflation is the arch enemy of interest rates, since it erodes the buying power of the fixed return that a mortgage holder receives. While many factors influence the markets, it's always important to keep a close eye on all the latest inflation data – and its impact on Mortgage Bonds and the home loan rates tied to them.

Initial Jobless Claims decreased by nearly 200,000 in the latest week, as another 576,000 people filed for benefits for the first time. While this number is still elevated, the strong improvement from the previous week was nice to see. California (+70K), Texas (+65K) and New York (+57K) reported the largest number of claims.

The number of people receiving benefits throughout all programs is now at 17 million, which is down 1.2 million from the previous week and still higher than the 8 million people receiving benefits in all programs in the comparable week last year. We will see last year's comparison figures move higher in the coming weeks, as we move into the timeframe of last year's large shutdowns at the start of the pandemic.

Investors were closely monitoring the 10-year Treasury and 30-Year Bond auctions held on Monday and Tuesday, respectively, to see the level of demand. High demand, which is reflected in the purchasing of Bonds and Treasuries, can push prices higher and yields or rates lower. Weak demand, on the other hand, can signal that investors think yields will continue to move higher, which can have a negative effect on rates.

While the 10-year Treasury Note auction was slightly weak, it was better than feared and yields did not react much to the results. The 30-year Bond Auction was solid, however. The bid to cover of 2.47 was above the one-year average of 2.32. Direct and indirect bidders took 82.9% of the auction compared to 78.9% in the previous twelve. Mortgage Bonds did move higher after the strong auction.

The number of people filing for unemployment for the first time remains in the millions, with...

Fall has ushered in cooler temperatures and hotter inflation, which is having an impact on...