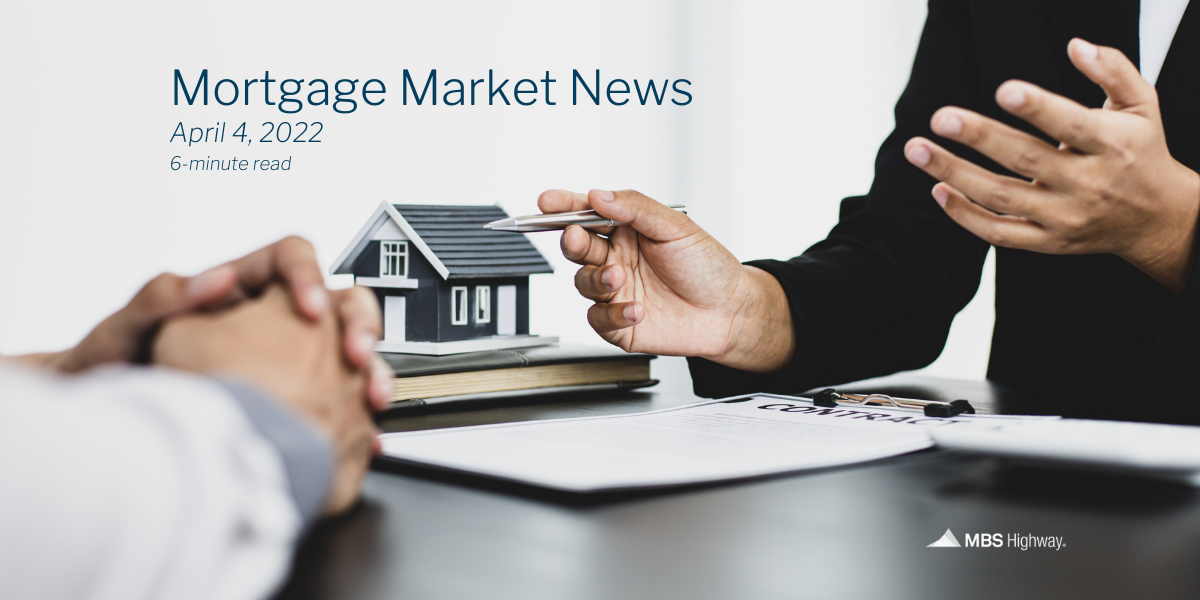 Jobs creations were strong in March, while home prices continue to appreciate and inflation continues to soar. Plus, learn what's happening with a key recession indicator. 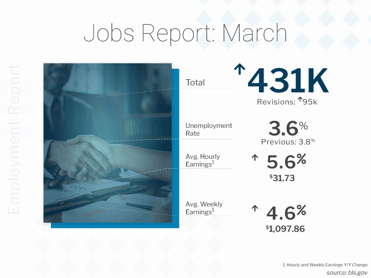 The Bureau of Labor Statistics (BLS) reported that there were 431,000 jobs created in March, though this was less than expectations of nearly 500,000 jobs. However, there were positive revisions to the data for January and February adding 95,000 new jobs in those months combined, which more than makes up for the miss.

Average hourly earnings rose by 0.4% in March and they were up 5.6% year over year. Average weekly earnings were up 0.1% due to less hours worked. On an annual basis, they were up 4.6%.

And of note, a disproportionate number of new jobs came from 16-19-year-olds, and those workers typically work less hours and are not paid as much. 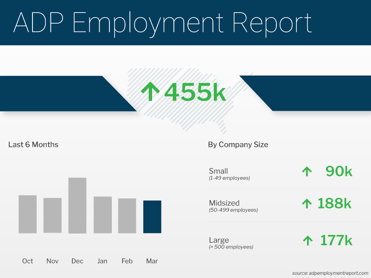 The ADP Employment Report, which measures private sector payrolls, showed that there were 455,000 jobs created in March, just above the 450,000 job gains that were expected. In addition, February’s figures were revised slightly higher from 475,000 to 486,000 new jobs in that month, adding to the strength of the report.

Both goods-producing and service-providing sector companies showed gains in March, with services contributing the majority share at 377,000 jobs. Leisure and hospitality had the biggest gains with 161,000 jobs, followed by education and health at 72,000, and professional and business at 61,000. On the goods-producing side, manufacturing also showed strong gains at 54,000. 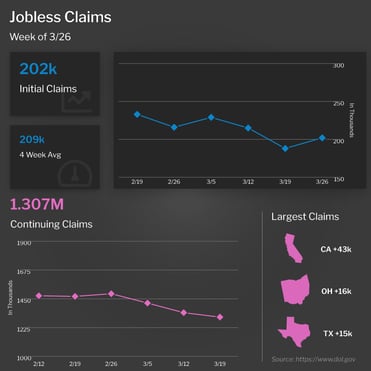 The number of people filing for unemployment benefits for the first time rose by 14,000 in the latest week, as 202,000 Initial Jobless Claims were reported. However, this follows the lowest reading in almost 53 years from the previous week, so a bounce higher is understandable.

Continuing Claims, which measure people who continue to receive benefits after their initial claim is filed, fell by 35,000 to 1.307 million. This is a low going back to 1969.

Claims are at very strong pre-pandemic levels, showing that the labor market remains tight as employers are holding on to their workers and firing less.

The Fed’s favorite measure of inflation, Personal Consumption Expenditures (PCE), showed that headline inflation rose 0.6% in February, which was in line with expectations. This caused the year over year reading to increase from 6% to 6.4%, which is the hottest level in 40 years!

Core PCE, which strips out volatile food and energy prices and is the Fed’s real focus, was just below estimates as it was up 0.4%. The year over year reading increased from 5.2% to 5.4%. 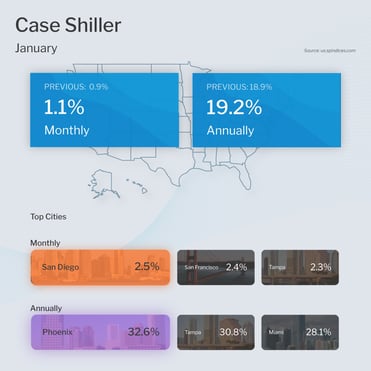 The Case-Shiller Home Price Index, which is considered the “gold standard” for appreciation, showed home prices rose 1.1% in January and 19.2% year over year. This annual reading is an acceleration from the 18.8% gain seen in the previous report.

The bottom line is that appreciation remains at very high levels, even in the face of mortgage rates, which started to move higher in December. 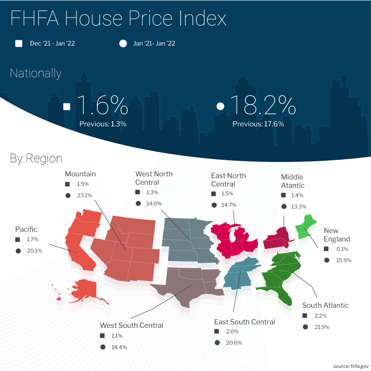 Home prices rose 1.6% in January and were up 18.2% year over year, which is an increase from the 17.6% rise reported for December.

Also of note, Zillow is predicting 18% home price appreciation from February 2022 to February 2023. This is supported by comments from Freddie Mac, who is saying there is a home shortage of four million homes. Note that builders have never built more than two million homes in a year, so the inventory shortage should persist for the foreseeable future.

In addition, Apartment List released its National Rent Report for March, which showed that rents rose 0.8%. Year over year rents were up a staggering 17.1%, though this is down from 17.6%. To put this in context, annual rent growth averaged just 2.3% in the pre-pandemic years from 2017-2019.

Over the first three months of 2022, rents were up almost 2%, which translates to about 7.5% year over year. While this is a slowdown from 2021, it is still a significant amount. Renewals are rising at around half the pace of new rents, up between 7-9%.

The yield spread between the 10-year Treasury and 2-year Treasury has been trending lower and actually inverted for a brief time last week. Why is this significant?

Normally, you would expect to receive a higher rate of return for putting your money away for 10 years versus 2 years. But when there is an economic slowdown and fear in the markets, the yield curve can go inverted – meaning that 2-year yields are higher than 10-year yields, which is backwards or upside down. Looking back at the history of recessions, we always see an inversion occur ahead of a recession, although it could take six months to two years for the actual recession to occur.

When the Fed hikes the Fed Funds Rate, this causes short-term yields to rise and can cause long-term yields to fall if it’s perceived that the rate hikes are getting inflation under control. Remember, the Fed hiked its benchmark Federal Funds Rate by 25 basis points at its March meeting. Note that the Fed Funds Rate is the interest rate for overnight borrowing for banks and it is not the same as mortgage rates.

Fed members are expecting seven additional hikes this year according to their dot plot chart. The spread between the 10-year and 2-year should continue to narrow and invert as the Fed hikes the Fed Funds Rate, and again this inversion has been a reliable recession indicator. And while a recession is not a great thing for the economy, one positive aspect is that periods of recession are always coupled with lower interest rates.