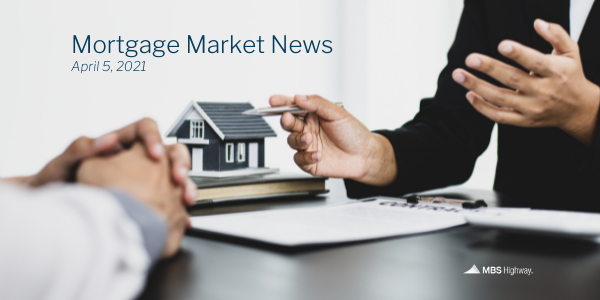 Last week may have brought April Fools' Day, but thankfully the strong job and home appreciation reports were no joke! 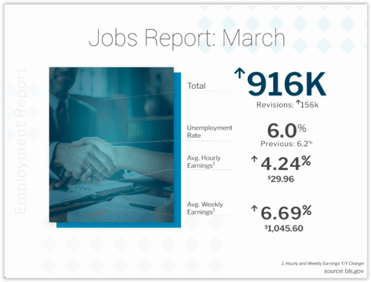 The Bureau of Labor Statistics (BLS) reported that there were 916,000 jobs created in March, which was stronger than the 675,000 expected. The leisure and hospitality and construction sectors led the way on job gains. In addition, there were positive combined revisions to January's and February's figures, totaling an additional 156,000 jobs in those months.

The Household Survey, where the Unemployment Rate comes from, is done by actual phone calls to 60,000 homes. The Household Survey also has a job loss or creation component, and it showed that there were 609,000 jobs created. We did see improvements in the Unemployment Rate, as it decreased from 6.2% to 6%. On the one hand, this decline was for the right reasons. While there were 609,000 job gains, the labor force increased by 347,000. Because there were so many more job gains than people joining the labor force, the unemployment rate moved lower.

However, it's important to break down the numbers, as the true unemployment rate is actually higher than the headline figure. That's because people who are not able to look for work due to pandemic reasons, and who are still unemployed, are not counted – and this number is at 3.7 million people. When we add this into the calculations, the real Unemployment Rate is 8.4%.

In addition, there has been a lingering misclassification error where people were classified absent from work for other reasons and not marked as unemployed on temporary layoff when they should have been. Without this error, the headline Unemployment Rate would have been 0.4% higher or 6.4%, while the real Unemployment Rate counting those unable to look for work due to pandemic reasons would be closer to 8.75%.

The all in U6 Unemployment Rate, which includes total unemployed, plus all persons marginally attached to the labor force, plus total employed part time for economic reasons, improved from 11.1% to 10.7%.

Average hourly earnings are up 4.2% year over year, which is down from 5.3% in the previous report. Average weekly earnings rose 6.7%, which is an increase from 6% in February's report. Weekly earnings measure what people actually take home, so the increase represents some nice gains. 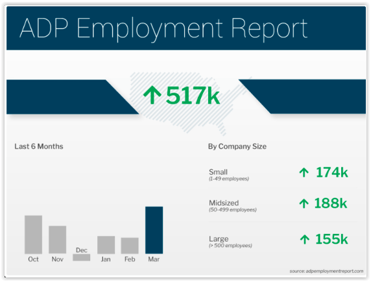 The ADP Employment Report, which measures private sector payrolls, showed that 517,000 jobs were created in March, which was in line with the strong job gains that were expected and the best level of hiring in six months! February’s report was also revised higher by 59,000 jobs, increasing the job gains in that month from 117,000 to 176,000.

The leisure and hospitality sector led the way in March with 169,000 new jobs, while the service sector added 437,000 new jobs in total. 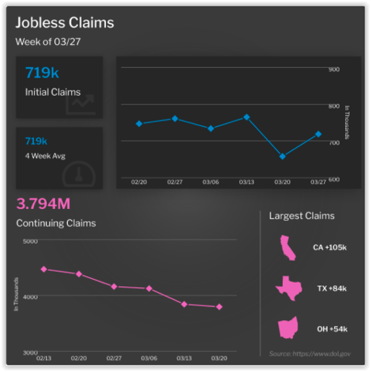 The number of people filing for unemployment benefits increased by 61,000 in the latest week, as Initial Jobless Claims rose to 719,000. California (+105K), Texas (+84K) and Ohio (+54K) reported the largest number of claims.

Continuing Claims, which measure people continuing to receive benefits, did decline by 46,000 but they are still elevated at 3.8 million. Pandemic Unemployment Assistance Claims (which provide benefits to people who would not usually qualify) and Pandemic Emergency Claims (which extends benefits to people after regular benefits expire) also decreased by 500,000 and 700,000, respectively. 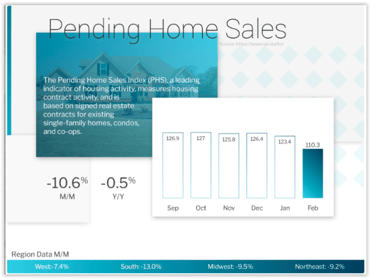 Pending Home Sales, which measure signed contracts on existing homes, fell 10.6% from January to February and they were essentially flat compared to February of last year. The real story remains low inventory, which is down 30% year over year and the reason sales are lower.

Lawrence Yun, chief economist for the National Association of REALTORS®, explained, "The demand for a home purchase is widespread, multiple offers are prevalent, and days-on-market are swift but contracts are not clicking due to record-low inventory."

Quite simply, if more homes were available, we would see more sales. 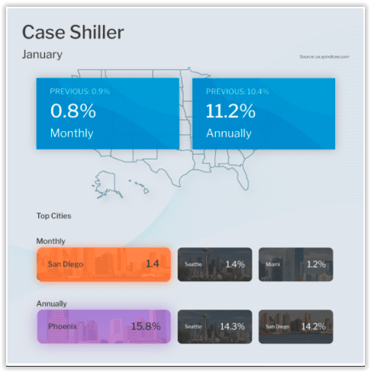 The Case-Shiller Home Price Index, which is considered the “gold standard” for appreciation, accelerated to a 15-year high in January, up 11.2% year over year on the national reading. This is an increase from December's reading of 10.4%.

The Federal Housing Finance Agency (FHFA) also released their House Price Index, which measures home price appreciation on single-family homes with conforming loan amounts. Note that while you can have a million-dollar home with a conforming loan amount, the report most likely represents lower-priced homes, where supply is tightest and demand is strongest.

The Jobs Report for June appeared strong on the surface, but that’s not the whole story. Plus,...