Last week was all about the labor sector, as two key employment reports for July were released. Housing also made headlines, with CoreLogic's latest Home Price Index Appreciation report showing that home prices were once again on the rise.

And there was some positive news from the manufacturing sector: the ISM Index, which measures the health of US manufacturing, came in at 54.2 for the month of July. This was above expectations of 53.5. While production remains below pre-pandemic levels, readings above 50 do indicate growth.

Both the ADP and BLS Jobs Reports for July had some important details to note behind the headline figures. First in on Wednesday was the ADP Employment report, which showed a gain of only 167,000 jobs in the private sector. This was much lower than the 2 million new jobs that were expected. However, June's report had a huge revision from 2.4 million to 4.3 million jobs created in that month. 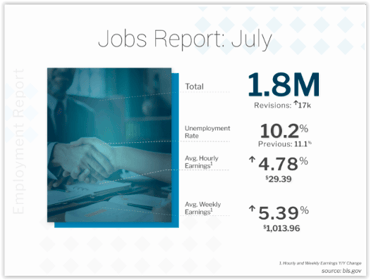 The more-closely anticipated BLS report showed that there were 1.8 million job gains in July, which was stronger than the 1.5 million that was expected. There are two reports within the Jobs Report, and there is a fundamental difference between them. The Business Survey is where the headline job number comes from and it's based predominately on modeling.

The Unemployment Rate decreased from 11.1% to 10.2%, which was stronger than expectations of 10.5%. While the Household Survey showed 1.35 million job gains, the labor force remained stable at around 160 million people, which is why we saw the unemployment rate improve.

The all in U6 Unemployment Rate, which includes total unemployed, plus all persons marginally attached to the labor force, plus total employed part time for economic reasons, decreased from 18% to 16.5%.

But these numbers don't tell the whole story.

There has been a misclassification error where people were classified as absent from work for other reasons and not marked as unemployed on temporary layoff when they should have been. Without this error, the unemployment rate would have been 1% higher or 11.2%.

Also of note, the number of persons not in the labor force who currently want a job declined by 463,000 to 7.7 million in July. These individuals were not counted as in the labor force or unemployed because they were not actively looking for work during the last 4 weeks or were unavailable to take a job. Why would they not be looking? Maybe they are in a field where they cannot yet return to work, are afraid to work because of the pandemic, or they are not incented because of the additional stimulus.

When we factor in this group of people, the real unemployment rate is likely 14.3% (15.3% with the misclassification error). All in all, while July did bring an improvement in job creations, it's also important to understand that the unemployment rate really is higher than what's being reported. 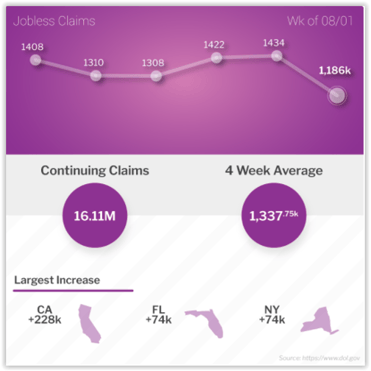 Another 1.2 million people filed for unemployment for the first time during the week ending August 1. While this remains a staggering number, it was about 250,000 less than the previous week and the first improvement we've seen among first-time filers in several weeks. California (+228K), Florida (+74K) and New York (+74K) reported the largest gains.

Continuing Claims, which measure people who continue to receive benefits, also improved in the latest week by 844,000 to 16.1 million.

Pandemic Unemployment Assistance Claims (PUA), which are not captured in the headline figure, totaled 656,000 in the latest week. These claims are filed by people like gig workers and contractors who would not usually be approved for unemployment benefits. Continuing PUA Claims improved 70,000 to 13 million.

All in all, the total number of people receiving some type of benefit is likely over 30 million, which is still very high and would point to a much higher unemployment rate than what we are seeing reported, as noted above.

However, the big story was the forecast, as CoreLogic projects that home prices will increase 0.1% from June to July and they expect prices to fall 1.0% in the year going forward. Their annual forecast increased significantly from a negative 6.6% in the next 12 months.

CoreLogic noted that last month’s HPI Forecast of a 6.6% home price decline through May 2021 has been revised as projected unemployment rates through 2020 showed improvement. The recent rebound of home sales suggests the pandemic did not derail homebuyers, who continue to be motivated by historically low mortgage rates. This, coupled with the declining supply of homes for sale, could shield home price growth from the impacts of the current economic uncertainty.

There were plenty of fireworks ahead of the Independence Day holiday, as key labor and housing...

Breaking Down the January Jobs Report

The Bureau of Labor Statistics (BLS) released its Jobs Report for January on February 4, and while...