Initial Jobless Claims were under 1 million for the first time since mid-March, as another 963,000 people filed for unemployment benefits for the first time in the latest week. Meanwhile, inflation grew hotter in July at both the consumer and wholesale levels – though it remains tame overall. And the Federal Housing Finance Agency made headlines, announcing a new fee. Find out more about what this means below. 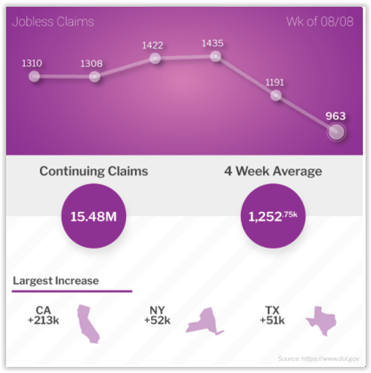 Another 963,000 people filed for unemployment benefits for the first time during the week ending August 8. This was 228,000 claims less than the previous week and the first reading under 1 million since mid-March. Continuing Claims, which count people who continue to receive benefits, improved by 604,000 to 15.5 million. California (+213K), New York (+52K) and Texas (+51K) reported the largest gains.

First-time Pandemic Unemployment Assistance (PUA) Claims totaled 488,000 in the latest week. These claims are not captured in the headline figure and they represent people like gig workers and contractors who usually would not be approved for unemployment benefits. Continuing PUA Claims improved by 2.2 million to 10.7 million people continuing to receive benefits.

All in all, the total number of people receiving some type of benefits is around 28.2 million, which is an improvement of about 3 million. Note that this figure is delayed 3 weeks and given the improvement we’ve seen, the unemployment rate is likely around 15% based on our calculations.

However, there is something important to keep in mind when looking at this data. While the improvement in jobless claims appears great on the surface, remember that the additional $600 in unemployment benefits expired recently. While we certainly hope that the decreasing number of unemployment claims is a result of people finding work, it is possible that some of the improvement is from people who are incented to return to work due to the expiration of additional benefits. We will certainly gain more clarity in the weeks to come.

The Producer Price Index (PPI), which measures inflation at the wholesale level, increased 0.6% from June to July. This monthly increase was double what forecasters expected. On an annual basis, PPI increased from -0.8% to -0.4%. Core PPI, which strips out volatile food and energy prices, was up 0.5% in July and increased from 0.1% to 0.3% year over year.

July's Consumer Price Index (CPI) came in at 0.6%, matching the increase seen in June. On an annual basis, consumer prices increased from 0.6% to 1%, which is a level that reflects inflation remaining in check. Higher gas prices certainly contributed to the monthly increase in consumer inflation, but they are still lower when compared to last year, weighing on the annual figure.

Core CPI, which also strips out food and energy prices, increased by 0.6% from June to July, while rising from 1.2% to 1.6% when compared to July of last year. Of note within the reports, rents have risen 3.1% across the country while the medical care index rose 5% over the last year.

The bottom line is that inflation remains well below the Federal Reserve's 2% target, and the pandemic will likely keep it low in the immediate months ahead.

The Latest From the Federal Housing Finance Agency

The FHFA announced that they would be assessing a 0.5% fee on refinances for loans sold to Fannie Mae and Freddie Mac after September 1. Their stated reasoning was, “In light of market and economic uncertainty resulting in higher risk and costs incurred by Fannie Mae, we are implementing a new loan-level price adjustment.”

This is a fee that will ultimately impact consumers who are refinancing as noted above, though it will not impact purchase loans – at least for the time being.

Retail Sales were also on the rise, up 1.2% from June to July. Removing automobiles, sales were up 1.9%. June's sales figures were also revised a bit higher as well. Overall, the report was stronger than expected but it will be important to see how the reduced additional unemployment benefits impacts retail sales going forward.

The National Federation of Independent Business released its Small Business Optimism Index, which fell 1.8 points to 98.8 in July. Of note, reports of expected better business conditions in the next six months declined 14 points to a net 25%. NFIB’s Chief Economist Bill Dunkelberg said, “This summer has been challenging for many small business owners who are working hard to keep their doors open and remain in business.” He also added that, “Small business represents nearly half of the GDP and this month we saw a dip in optimism. There is still plenty of work to be done to get businesses back to pre-crisis numbers.”

Redfin released a survey showing that 56% of single-family homes for sale faced competition, followed by 54% of townhomes and 42% of condos. This reflects the tight inventory noted in recent New and Existing Home Sales reports.

Homebuyers faced a double whammy in February as both low inventory and freezing temperatures...

After the market closures on Monday in honor of the Labor Day holiday, the economic calendar was...