The Real Reason for the Drop in New Home Sales

Home price appreciation set another record in May, while New and Pending Home Sales dropped in June. Inflation remains hot but was not as hot as expected, per the Fed’s favored inflation measure, Personal Consumption Expenditures. And speaking of the Fed, their meeting of the Federal Open Market Committee was notable for both things they said, and things they didn’t say.

Plus, the first look at second quarter GDP was reported and it was a big miss. The market was expecting 8.4% growth and instead we saw 6.5%. Part of the reason was due to inventories, which we know companies are not able to build at this point in time. However, when companies are able to do so, this will add to GDP in the future. 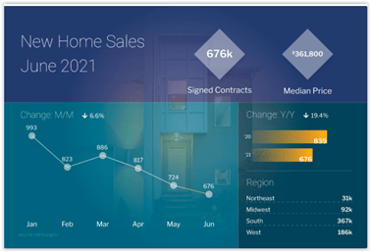 New Home Sales, which measures signed contracts on new homes, were down 6.6% in June, which was a significant miss and well beneath expectations of a 3.4% gain.

There is clearly a huge backlog of construction for builders, which is why the nation’s largest builders like D.R. Horton are pulling back on sales to let supply catch up to meet demand. This is the reason for the decline in sales, not a lack of demand.

Also of note, the median home price was reported at $362,000, which is down 5% from May’s report and up 6% year over year. The median home price is not the same as appreciation, which we discuss in detail below, but rather it means that half the homes sold were above that price and half were below it. 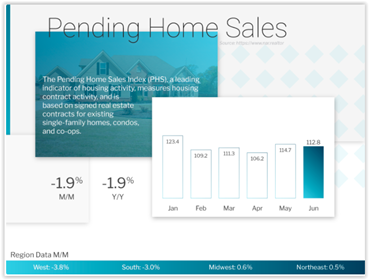 Pending Home Sales, which measures signed contracts on existing homes, decreased by 1.9% in June after an 8% rise in May. Year over year contracts are down 1.9% as well.

While low inventory certainly remains challenging for homebuyers, renting is not a great option either. Rents are continuing to accelerate per Zillow, as their Rent Index rose 1.8% in June alone and 7.1% year over year. The comparisons to last year could cause some skewing, but the index is up 5.1% from March alone and is the fastest pace in the history of the data! Plus, Invitation Homes, the largest single-family landlord in the U.S., accelerated rental increases across its portfolio of more than 80,000 properties. They raised rents by 14% on new leases and almost 6% on renewals.

So, while home prices are up 16.6% year over year as discussed below, rents on new leases are not too far behind at 14%. The big thing to remember is that those rents can continue to go up each year and according to Invitation Homes, their renewals went up almost 6%. With a home purchase, unless you have an adjustable rate mortgage, your payment will remain the same. Of course, taxes and insurance can rise modestly, but this is nothing compared to rental increases. Additionally, remember that part of a mortgage payment is your own money in principal. 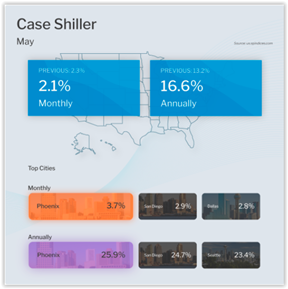 The Case-Shiller Home Price Index, which is considered the “gold standard” for appreciation, showed home prices rose 2.1% in May and 16.6% year over year. This annual reading is up almost 2% from the annual price gains seen in April and is also a record high.

The Federal Housing Finance Agency (FHFA) also released their House Price Index, which measures home price appreciation on single-family homes with conforming loan amounts. While you can have a million-dollar home with a conforming loan amount, the report most likely represents lower-priced homes where supply is tightest and demand is strongest.

As such, it’s no surprise that the data was even stronger than what Case Shiller reported. Home prices rose 1.7% in May and they were up a staggering 18% year over year, which is even higher than the 15.7% annual appreciation reported for April.

Inflation Still Hot But Beneath Expectations

The Fed’s favored measure of inflation, Personal Consumption Expenditures (PCE), showed that headline inflation was up 0.5% in June, which was lower than expectations of 0.8%. Year over year the index remained at a very hot 4% but it was beneath the 4.2% expected.

Core PCE, which strips out volatile food and energy prices and is the Fed’s real focus, was up 0.4% in June. Year over year, Core PCE increased from 3.4% to 3.5%, which is still hot but under the 3.7% anticipated.

You may be wondering why the PCE report is trending lower than the Consumer Price Index (CPI) report the was released earlier in the month. The reason is the weightings within each report. PCE only has a 12% weighting on housing versus 24% in CPI and housing of course is one of the largest expenses most individuals have.

"I'd say we have some ground to cover on the labor market side," Powell said. "I think we're someway away from having had substantial further progress toward the maximum employment goal."

The Fed believes our path of recovery will depend on the virus, and they think that future waves will have less of an impact on the economy.

We've been hearing the term "transitory" used often to describe the Fed's views on current inflation trends. Powell added some clarity to the term last week, saying that "transitory" simply means it is not something that should last for several years. "The concept of transitory is that price increases will happen. We're not saying they will reverse, but the process of inflation will stop."

Powell later added that what has happened in the past year is an example of "a price increase but not an inflation process." The Fed expects a few more months of hot inflation, followed by a decline.

On the subject of when the Fed might start tapering their purchases of Mortgage Backed Securities (MBS) and Treasuries, which have been ongoing to help stabilize the markets, the Fed did not provide any direction on timing.

Based on Powell’s comments, it seems the Fed is still a long way off from tapering their purchases, and they will likely not begin doing so until next year. When tapering does occur, the Fed will likely taper at a snail’s pace but taper more of MBS than Treasuries at that time. 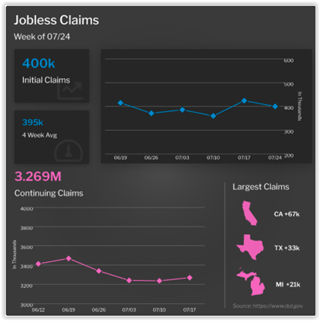 The number of people filing for unemployment for the first time fell by 24,000 in the latest week, with Initial Jobless Claims reported at 400,000. This is a slight improvement from the previous week, though it seems we have stalled near these levels. One key reason is the shortage in chips, causing manufacturing plants to take pauses and shut down because they don’t have the supplies they need to stay open.

The number of people continuing to receive regular benefits was near unchanged at 3.3 million, which is near a post-pandemic low.

Pandemic Unemployment Assistance Claims (which provide benefits to people who would not usually qualify) and Pandemic Emergency Claims (which extend benefits after regular benefits expire) increased by 211,000 combined after a 1.1 million drop in the previous report.

All in all, 13.2 million individuals are still receiving benefits throughout all programs, which is up 582,000 from the previous report. It’s likely that all of the figures within this report will improve once September comes and all of the extended benefits expire.