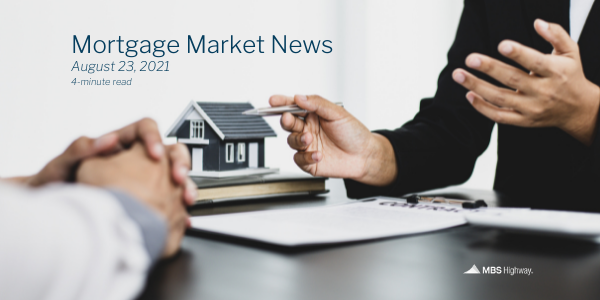 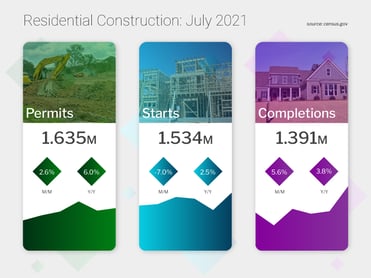 Housing Starts, which measure the start of construction on homes, fell 7% in July, which was well short of expectations. More importantly, starts for single-family homes also dropped 4.5%.

Building Permits, which are a good forward-looking indicator of construction, were up 2.6% overall. However, what we really need are permits for single-family homes, and they were down 1.7%.

Single-family homes authorized but not started were up nearly 1% in July and 56% year over year. This figure remains elevated and it reflects the delays due to supply bottlenecks, higher costs and labor issues.

The bottom line is the lack of Housing Starts and Building Permits means that tight supply will likely continue, which will be supportive of home prices.

On a related note, rents continue to rise per CoreLogic’s Single-Family Rent Index, which showed that rents were up 7.5% year over year in June. This is the fastest increase since 2005. High-priced rentals (which measure 125% or more of the median rent) were up almost 10%. Attached rentals were up 4.6%, while detached rentals (which have more space) were up 10.5%.

And speaking to the demand for homes, Redfin reported that the median days on the market for a home was 15 days in July, up slightly from 14 in June but still extremely strong. In addition, 60% of homes sold in bidding wars, which is still much higher than normal but this has cooled a bit from 66% in June. Redfin noted there was also an increase in supply, as listings increased 4% last month. 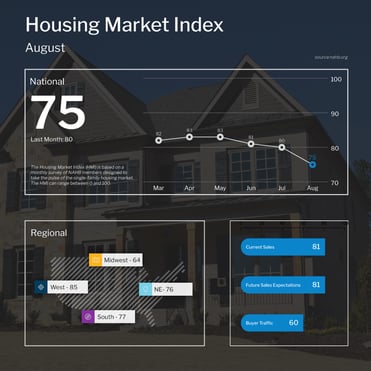 Breaking down the components of the index, current sales conditions fell 5 points to 81, sales expectations for the next six months remained flat at 81, and buyer traffic declined 5 points to 60.

While the readings with the NAHB Housing Market Index have declined in recent months, it's important to note that any reading above 50 signals expansion and 75 is still a strong level. In addition, the late summer months are historically a bit slower when it comes to the housing sector due to seasonality issues and families not wanting to move at the start of the school year.

Builders are also still dealing with elevated material costs due to supply bottlenecks. While lumber prices have come down, the aggregate residential material costs are up 13% from the beginning of the year.

NAHB chief economist, Robert Dietz, noted, “While the demographics and interest for home buying remain solid, higher costs and material access issues have resulted in lower levels of home building and even put a hold on some new home sales.” However, he does feel that “production bottlenecks should ease over the coming months and the market should return to more normal conditions.” 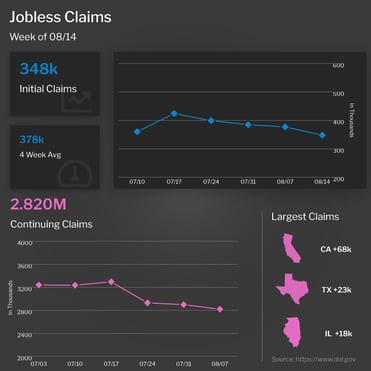 The number of people filing for unemployment benefits for the first time fell to 348,000 in the latest week, as Initial Jobless Claims declined by nearly 30,000 from the previous report. California (+68K), Texas (+23K) and Illinois (+18K) reported the largest number of claims.

The number of people continuing to receive regular benefits declined as well, with Continuing Claims dropping by nearly 80,000 to 2.8 million.

Pandemic Unemployment Assistance Claims (which provide benefits to people who would not usually qualify) and Pandemic Emergency Claims (which extend benefits after regular benefits expire) also decreased by roughly 287,000 combined.

The minutes from the Fed’s July 27-28 meeting were released and they showed that most participants judged it would be appropriate to start reducing their purchases of Mortgage Backed Securities (MBS) and Treasures this year if the economy were to evolve broadly as they anticipated. These purchases have been ongoing to help stabilize the markets.

The minutes noted that “substantial further progress” has been made on price stability and is also close to being satisfied on maximum employment. Some Fed members thought tapering should occur in the coming months, while others favored early 2022.

It’s important to keep in mind that these minutes are from the meeting that occurred in late July, before new inflation data and the July Jobs Report were released – and these reports showed continued inflation and robust job growth. Some of the opinions have since changed towards tapering sooner. We have seen some of the most dovish members, including Boston Fed President Eric Rosengren and Minneapolis Fed president Neel Kashkari, support tapering since the July meeting.

However, one factor that could delay tapering would be the development of the Delta variant’s impact on the economy.

This week’s Fed meeting at Jackson Hole, which begins on Thursday, could offer more clues on the Fed’s tapering timeline. It’s possible the Fed will wait to receive more data in the coming weeks and not announce a decision regarding tapering until their meeting on September 21-22.

Waiting until September will let them analyze another month of inflation data and the August Jobs Report that will be released on September 3. This timing will also let them review how the unemployment figures play out after the Labor Day expiration of extended benefits and how the economy performs in relation to the Delta variant.

Right now, 65% of economists believe the Fed will announce tapering in September.

But remember, they have said many times that they are going to give plenty of advanced notice, meaning that even if they make an announcement in September, the actual tapering of their purchases may not happen until early 2022.

Retail Sales disappointed in July, falling by 1.1%, which was lower than the expected 0.2% decrease. Regional manufacturing via the Empire State Index and Philadelphia Fed Index also missed expectations in August, due in part to ongoing supply chain issues. However, last week’s 20-year Bond Auction was in line with expectations.