Existing and New Home Sales both beat expectations in July. Consumer inflation also remains hot and Fed Chair Jerome Powell delivered some key remarks. Plus, the second reading on second quarter GDP rose slightly to 6.5%, up from 6.4%. While this is a strong number, it is much lower than the initial projections of 9%. 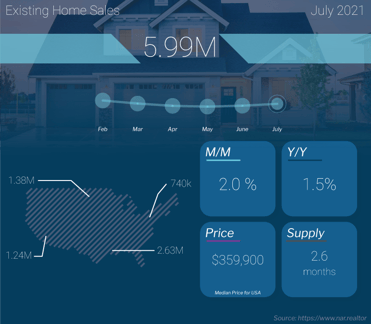 Existing Home Sales, which measure closings on existing homes, rose 2% from June to July, reaching an annual pace of 5.99 million units. Sales were also up 1.5% when compared to July of last year and are still at strong levels.

Inventory is starting to increase, albeit slowly. There were 1.32 million homes for sale at the end of July. While this is up 7% from June, it is still 12% lower than the same time last year.

The median home price was reported at $359,900, which is 18% higher than July of last year. Though the media might report this otherwise, it’s really important to understand that the median home price is not the same as appreciation. It simply means half the homes sold were above that price and half were below it.

First-time homebuyers accounted for 30% of sales, which is down from 31% in June. Cash buyers remained stable at 23% but this figure is still up big from just 16% last July. Investors purchased 15% of homes, up from 14% in the previous month.

What does this data suggest? Investors may be crowding out first-time homebuyers, as they are likely purchasing lower-priced homes that they can then rent out.

New Home Sales, which measure signed contracts on new homes, came in stronger than expectations. Sales rose 1% from June to July, reaching an annualized pace of 708,000. While this amount is down on a year-over-year basis given the spike in sales due to the pandemic last year, it’s not much lower than when sales were at a more normalized level pre-Covid.

Looking at inventory levels, there were 367,000 new homes for sale at the end of July. While this is still very tight, it is up 4% from June’s report and 7% from May, so certainly a move in the right direction.

Powell also maintained his stance that inflation is temporary and found largely in a narrow group of goods and services impacted by the pandemic.

Powell noted that the Fed could begin tapering its ongoing purchases of Mortgage Backed Securities (MBS) and Treasures this year. Referencing the Fed’s July meeting, Powell said, “I was of the view, as were most participants, that if the economy evolved broadly as anticipated, it could be appropriate to start reducing the pace of asset purchases this year.”

He explained, “The intervening month has brought more progress in the form of a strong employment report for July, but also the further spread of the delta variant. We will be carefully assessing incoming data and the evolving risks.”

Speaking of the Fed, their favored measure of inflation, Personal Consumption Expenditures (PCE), showed that headline inflation was up 0.4% in July, which was in line with expectations. However, on an annual basis, the index rose from 4% to 4.2% - the hottest reading in 21 years.

Core PCE, which strips out food and energy prices and is the Fed’s real focus, was up 0.3% in July. Year over year, the reading remained at 3.6% after the higher revision to the previous report, bringing it to the hottest reading in 20 years.

Though many factors influence the markets, inflation (and whether the rise is in fact transitory as the Fed maintains) remains crucial to monitor in the months ahead. 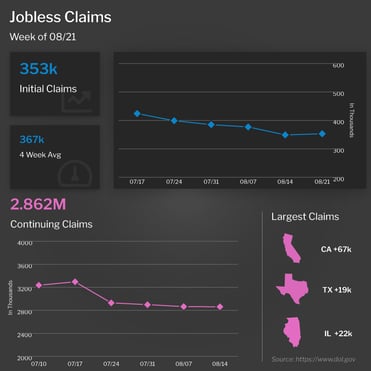 The number of people filing for unemployment benefits for the first time rose slightly to 353,000 in the latest week, but this is still hovering near the post-pandemic low set in the previous report. California (+67K), Illinois (+22K), and Texas (+19K) reported the largest number of claims.

Pandemic Unemployment Assistance Claims (which provide benefits to people who would not usually qualify) and Pandemic Emergency Claims (which extend benefits after regular benefits expire) were up by a combined 53,000.

All told, 12 million people are still receiving benefits throughout all programs, which is up 182,000 from the previous report. This data will be important to monitor in the coming weeks, when extended benefits expire nationwide in early September.

The latest Personal Consumption Expenditures report showed that inflation continues to rise, while...