Unemployment levels are still staggeringly high as Initial Jobless Claims remained in the millions for the second straight week. Home sales continue to be a bright spot, as both New and Pending Home Sales came in stronger than expected in July, while home prices also continue to appreciate. 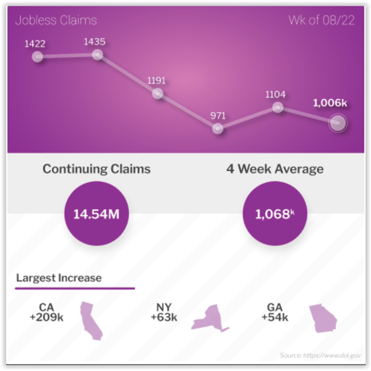 Another 1 million people filed for unemployment benefits for the first time during the week ending August 22, which was 98,000 fewer claims than the previous week. Continuing Claims, representing people who continue to receive benefits, also improved by 223,000 to 14.5 million.

Pandemic Unemployment Assistance (PUA) Claims filed by people like gig workers and contractors who are not typically approved for unemployment benefits totaled 608,000 in the latest week. Continuing PUA Claims improved by 252,000 to 11 million. These figures are in addition to the headline numbers.

All in all, the total number of people receiving some type of benefits is around 28 million, which would bring the real-time estimate of the unemployment rate north of 16.5%. 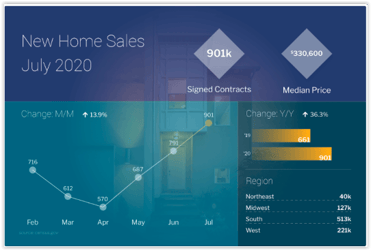 New Home Sales, which measures signed contracts on new homes, were up 14% in July, which was much stronger than the small gain that was expected. Sales are now up 36% when compared to July of last year. However, there were only 299,000 new homes for sale at the end of July, which represents a 4-month supply of homes, showing that inventory remains very tight.

The median sales price of new homes sold increased 7.2% when compared to July of last year to $330,600. It's important to note that this is not appreciation but instead means half the homes sold above and half below this figure. In other words, more higher-priced homes sold when compared to the same time last year.

The encouraging news is that affordability is still good thanks to low home loan rates and homes appreciating at a good clip, as evidenced by the FHFA and Case-Shiller reports detailed below. 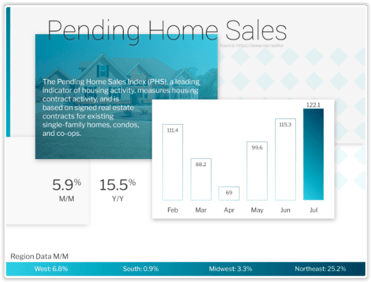 Pending Home Sales, which measures signed contracts on existing homes in July, were up 5.9% from June to July and were also 15.5% higher than July of last year, per the National Association of REALTORS. NAR's chief economist Lawrence Yun said, “If 20% more homes were on the market, we would have 20% more sales, because demand is that high.” Yun also noted that, “Home sellers are seeing their homes go under contract in record time, with nine new contracts for every 10 new listings.”

All in all, housing continues to be a bright spot in the economy in this unprecedented year.

The latest Case-Shiller Home Price Index, which is considered the “gold standard” for appreciation, showed that nationally there was a 4.3% annual gain in June. This was unchanged from the gain reported for May.

The 20-city Index rose 3.5% year over year. While this was a tick down from the 3.6% annual figure reported for May, this is still a very strong appreciation figure. Regionally, price gains in Phoenix (+9%), Seattle (+6.5%) and Tampa (+5.9%) were the strongest, while price gains were smallest in Chicago, New York and San Francisco.

The Federal Housing Finance Agency (FHFA) also released their House Price Index, which measures home price appreciation on single-family homes with conforming loan amounts. Home prices rose 0.9% in June and are up 5.7% compared to June of last year. This was a big improvement from the 4.9% annual appreciation reported for May.

At the virtual Jackson Hole symposium, Fed Chair Jerome Powell stated that the Fed is willing to allow inflation to run hotter than normal to support the labor market and economy. He explained a policy of “average inflation targeting,” which means the Fed will allow inflation to run moderately above its 2% goal for some time following periods it has run below that objective. However, the Fed was very ambiguous because they did not mention the timeframe for calculating average inflation of 2%.

Core PCE, which strips out food and energy prices and is what the Fed focuses on, also increased 0.3% from June to July and 1.3% compared to July of last year. This is still well below the Fed’s long-range target of 2%.

It will be interesting to see when the Fed starts the clock on the “average inflation” measure. If it were to start today, they would need to let inflation run to 2.7% to average 2%. The bottom line is that any increases in inflation will be important to monitor in the months ahead.

The preliminary or second look at second quarter GDP came in at -31.7%. Though this was a slight improvement from the first look of -32.9%, it is still extremely weak and reflective of the economic shutdowns during the initial height of the pandemic. Economists do expect a big bounce back in GDP for the third quarter. Relatedly, Durable Goods Orders (which are orders for items that last three years or more) were better than expected in July, which factors into third quarter GDP estimates.

July was a strong month for job growth, though private sector payrolls did come in beneath...