Digging Deeper Into the Unemployment Rate

July was a strong month for job growth, though private sector payrolls did come in beneath expectations. Reports also showed that home prices continued to heat up in June. Fed chatter also made headlines.

The Bureau of Labor Statistics (BLS) reported that there were 943,000 jobs created in July, which was stronger than expectations of 870,000 new jobs. In addition, there were positive revisions to May’s and June’s reports, adding 119,000 new jobs in those months combined.

The Household Survey, where the Unemployment Rate comes from, is done by actual phone calls to 60,000 homes. The Household Survey also has a job loss or creation component, and it showed there were 1,043,000 job creations, while the labor force increased by 261,000. The number of unemployed people decreased by 782,000, causing the Unemployment Rate to fall by from 5.9% to 5.4%.

In addition, people who have not looked for work in the last four weeks are also not counted in the labor force or counted as unemployed – and that number totals 6.5 million. When we factor this into the calculations as well, the Unemployment Rate is really closer to 9.2%. When these individuals start looking for work again, they will be counted in the calculations, which could drive the Unemployment Rate higher until they actually find a job. We may see this occur after Labor Day, when the extra unemployment benefits are cut everywhere. 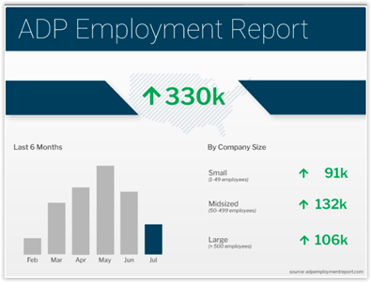 The ADP Employment Report, which measures private sector payrolls, showed that there were 330,000 jobs created in July, which was less than half of market expectations. Additionally, June’s report was revised lower by 12,000 jobs, bringing the total number of jobs created in June to 680,000.

The services sector led the way in July with 318,000 job creations; leisure and hospitality jobs showed the strongest gains again with 139,000 new jobs. The goods producing sector only increased by 12,000 jobs.

After losing almost 20 million jobs during the pandemic, we have recovered back almost 13 million. Yet, there are still 7 million unrecovered jobs while there are 9.3 million job openings.

The number of people filing for unemployment for the first time declined by 14,000 in the latest week, as Initial Jobless Claims were reported at 385,000. California (+65K), Texas (+29K) and Pennsylvania (+19K) reported the largest number of claims.

The number of people continuing to receive regular benefits was down 366,000 as Continuing Claims were reported at 2.9 million. This is the first dip below 3 million since the pandemic began, and it is also a post-pandemic low.

Pandemic Unemployment Assistance Claims (which provide benefits to people who would not usually qualify) and Pandemic Emergency Claims (which extend benefits after regular benefits expire) also decreased by 92,000 combined.

As of this latest report, 13 million individuals are still receiving benefits throughout all programs, which is down 181,000 from the previous report. It’s likely that all of the figures within this report will improve once September comes and all of the extended benefits expire.

CoreLogic released their Home Price Index report for June, showing that home prices rose by 2.3% from May. Prices also increased 17.2% year over year, which is up from the 15.4% annual gain reported for May.

CoreLogic forecasts that home prices will rise 0.7% in July and 3.2% in the year going forward. But remember in June, they only anticipated an 0.8% monthly increase and prices ended up rising 2.3%. On an annual basis, they are forecasting that prices will rise 3.2%, which is lower than their 3.4% annual forecast from May’s report and lower than most forecasts out there.

While higher home prices and low inventory are challenges for homebuyers, the alternatives aren’t favorable, either.

The Apartment List National Rent Report for July showed a 2.5% increase in rental prices from June. Prices are up by 10.3% compared to July of last year and they’re also 9.4% higher compared to pre-pandemic levels from March 2020. In addition, cities that lagged like San Francisco and New York are seeing sharp snap backs. Other cities continue to have rapid rental gains led by Boise, Idaho, where rents are up 39% since the start of the pandemic.

The bottom line is rents are rising almost at the pace of home prices and rents can continue to go up each year. With a home purchase, unless you have an adjustable rate mortgage, your payment will remain the same. Of course, taxes and insurance can rise modestly, but this is miniscule compared to rental increases. Additionally, remember that part of a mortgage payment is your own money in principal.

Fed Governor and possible next Fed Chair, Lael Brainard, commented on when she believes the Fed should begin tapering their purchases of Mortgage Backed Securities and Treasuries, which have been ongoing to help stabilize the markets. Brainard said that she expects to be more confident in assessing progress once the September data is in hand, when consumption, school, and work patterns settle into a post-pandemic normal. She agrees with Fed Chair Jerome Powell in saying that employment has some distance to go.

Because the data is always delayed a month, her statements mean she would not feel confident in assessing progress until October, with the closest Fed meeting being November 2-3. And since the Fed said that they will give plenty of advanced warning before actually tapering, it’s possible they may announce their plans at their November meeting but not actually begin tapering until early 2022.

Fed Governor and voting member, Chris Waller, was also in the news with a differing opinion than many other Fed members. He stated he would be ready to start tapering sooner, in October if he sees strong job growth for July and August. He thinks if we see 2 million job creations over those two reports, this would fulfill the “substantial progress” the Fed is looking for in the labor market.

August brought disappointing news from the labor sector, as job growth was much lower than...