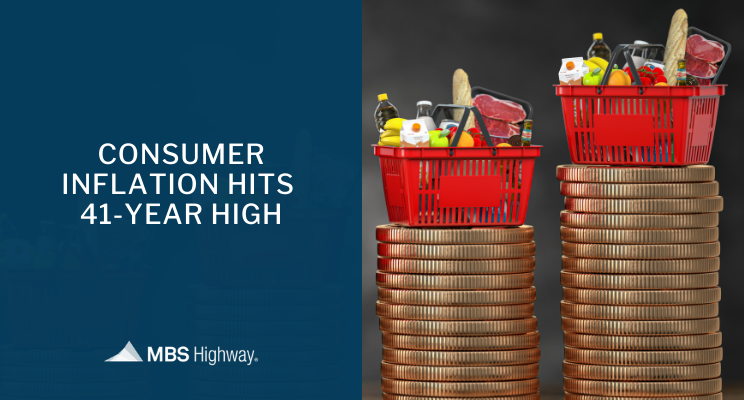 Consumer inflation has been on the rise, with the latest Consumer Price Index for March showing inflation at the highest level since 1981. So why does this matter?

Note that there are two main reports that measure inflation at the consumer level: the Consumer Price Index (CPI) and Personal Consumption Expenditures (PCE). Both CPI and PCE are each reported on a monthly basis and both reports will give us the data for the previous month (e.g., an inflation report that is released in April will give a reading of inflation for March).

The CPI and PCE reports have two main components: Headline Inflation (overall inflation) and Core Inflation, which strips out volatile food and energy prices. CPI measures prices on a fixed basket of goods and has a significant weighting towards housing and out of pocket medical expenses.

On Tuesday, the Bureau of Labor Statistics reported that Headline CPI rose by 1.2% in March. This pushed the year over year reading higher from 7.9% to 8.5%, which is the hottest reading in 41 years.

Core (CPI), which again strips out volatile food and energy prices, rose by 0.3%. As a result, year over year Core CPI increased from 6.4% to 6.5%, which was a bit less than expected. The Headline inflation jump was expected due to rising oil and food prices, but the Core reading was cooler than anticipated and garnered a positive reaction in the Bond market when the data was released on Tuesday.

Within the report, rents rose 0.4% in March and increased from 4.2% to 4.4% on a year over year basis. While this data has started to increase, the CPI report is still not capturing the double digit increases year over year that many other rent reports are showing.

Owners’ equivalent rent also increased 0.4% and the year over year figure rose from 4.3% to 4.5%. However, note that this data is based on a survey that asks homeowners, “If someone were to rent your home today, how much do you think it would rent for monthly, unfurnished and without utilities?” Understandably, this is very subjective and many people would be guessing these amounts so while this data tries to capture the rise in home prices, it does a poor job.

Inflation became a big and widespread issue last year due in large part to the ongoing supply chain issues caused by the pandemic. More recently, the war in Ukraine has impacted the price of oil and other commodities. Ukraine has also been planting 20-30% less crops due to the conflict, which is a huge amount and will lead to a lesser harvest in the summer/fall and add to pricing pressures.

Food prices have also been rising here in the U.S and of particular note, 23 million chickens just had to be put down due to bird flu, which will likely contribute to higher poultry prices in the coming months. Anyone who has gone out to eat lately has seen the increased costs being passed on. The rise in food prices may cause a larger disparity between headline and core inflation in the months to come.

Do you want to benefit from analysis like this on a daily basis?

Investing in an MBS Highway membership – where you'll have access to tools like our Bid Over Asking Price, Buy vs. Rent Comparison, Loan Comparison tool, daily coaching videos, lock alerts and more – means you'll have everything you need to turn prospective homebuyers into clients and become the type of advisor they need to guide them in today's market and for years to come.

Take a free 14-day trial of MBS Highway and see for yourself how we can help you grow your business and benefit from the opportunities 2022 will bring.

Despite slowing activity in the housing market, supply still remains tight. Plus, the Fed’s latest...