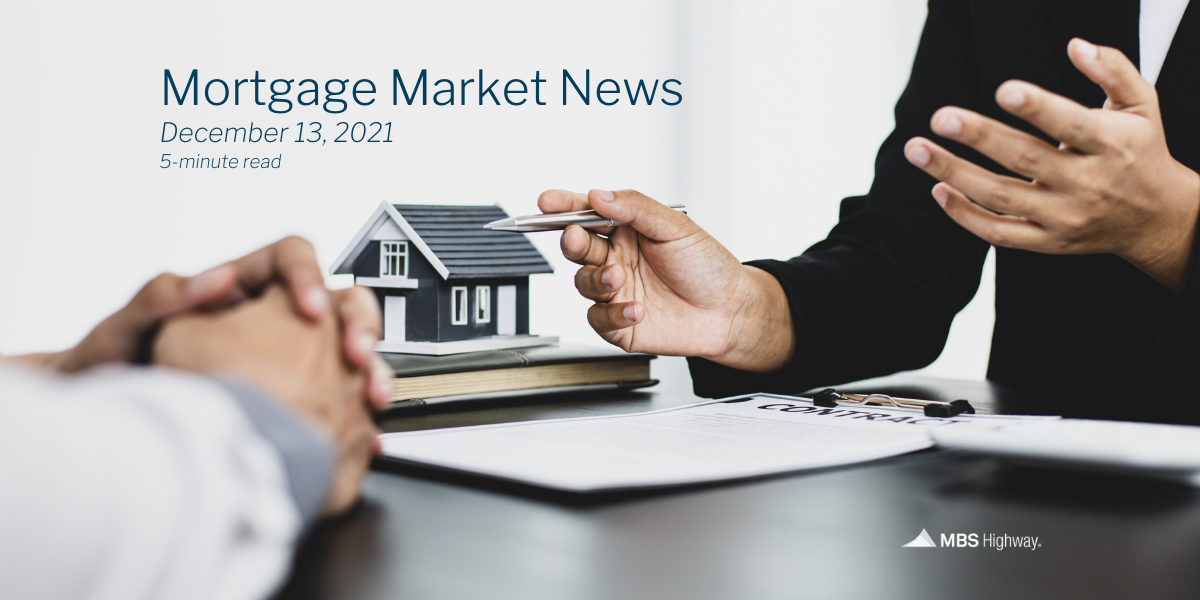 Inflation, home prices and rents are all on the rise, while Initial Jobless Claims hit their lowest level since 1969.

The Consumer Price Index (CPI), which measures inflation on the consumer level, rose by 0.8% in November. This was hotter than expectations and pushed the year over year reading significantly higher from 6.2% to 6.8%!

Core CPI, which strips out volatile food and energy prices, rose by 0.5%. While this was in line with expectations, the reading did cause year over year Core CPI to jump from 4.6% to 4.9%.

Within the report, rents rose 0.5% in November and increased from 2.7% to 3% on a year over year basis. However, the CPI report is still not capturing the increases we are seeing in many other rent reports that are showing double digit increases year over year, such as the latest Apartment List report detailed below. We may see some catch up in this CPI data in future months but for now the reporting continues to be dragged down by their methodology.

Also of note, owners’ equivalent rent also increased 0.5% in November and the year over year figure rose from 3.1% to 3.5%.

Remember, inflation is the arch enemy of fixed investments like Mortgage Bonds because it erodes the buying power of a Bond's fixed rate of return. If inflation is rising, investors demand a rate of return to combat the faster pace of erosion due to inflation, causing interest rates to rise. Though many factors influence the markets, keeping an eye on inflation remains critical.

The Latest on Home and Rental Prices

CoreLogic released their Home Price Index report for October, showing that home prices rose by 1.3% from September and 18% year over year. This annual gain is unchanged from the previous report. Detached homes appreciated at an even higher pace of 19.5% year over year.

The unchanged 18% annual figure for October follows suit with recent appreciation data released by both Case-Shiller and the Federal Housing Finance Agency, which seem to reflect that we’ve reached the maximum year over year gains. Note this does not mean that home prices are going to decline. It simply means we may see slower month over month gains and that home prices may rise at a more modest pace.

CoreLogic forecasts that home prices will appreciate 0.2% in November and 2.5% in the year going forward. Yet, they remain conservative in their forecasting and continue to miss on the low side. For example, CoreLogic had forecasted prices for October would rise by 0.1% from September and they actually increased by 1.3%.

Even though CoreLogic only forecasts a 2.5% gain in home prices over the next year, they are certainly the outlier compared to other forecasts. Goldman Sachs expects 16% gains, Zillow anticipates 14%, and Fannie Mae sees prices rising by roughly 7.5%. Mid to high single digit appreciation is definitely attainable and is still very meaningful for wealth creation. For example, a $400,000 home that appreciated by 8% would result in $32,000 in appreciation gain in just one year.

CoreLogic also conducted a consumer survey, which showed that over half of respondents across every age cohort said that owning a home has always been a goal of theirs. This further supports the outlook that consumer desire for homeownership remains.

Apartment List also released their National Rent Report which showed that rents increased 0.1% in November. While this is the lowest month-over-month growth rate of the year, rents have increased almost 18% year to date. To put this in perspective, rent growth from January to November averaged just 2.6% in the pre-pandemic years from 2017-2019. Although low inventory around the country has made buying a home challenging for many people, renting is not a better option. 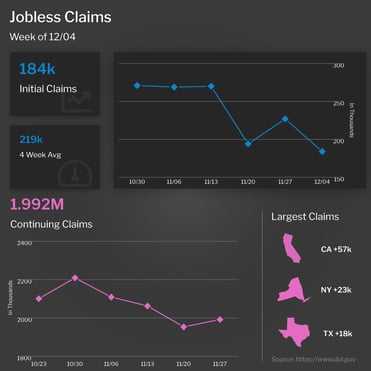 Initial Jobless Claims fell by 43,000 in the latest week, as the number of people filing for unemployment benefits for the first time was reported at 184,000. This is the lowest reading in 52 years!

Continuing Claims, which measures individuals who continue to receive benefits, increased by 38,000 to 1.992 million, coming off a pandemic-era low.

There are now 1.95 million people in total receiving benefits, which is a healthy number and in stark contrast to the 20 million plus seen last year.

The October JOLTS (Job Openings and Labor Turnover) report was also released, showing that there were 11 million job openings in October. This is up from the 10.6 million reported in September and is just slightly below the record high of almost 11.1 million seen in July. Some of the areas with the highest job openings, which you would expect to see, include leisure and hospitality (1.78 million), manufacturing (1 million), construction (410,000) and transportation (611,000).

The number of people quitting their job was reported at 4.16 million, off the September level of 4.36 million and a rate of 2.8%. This is still elevated but lower than the record high of 3%. The data is not surprising, as many companies have expressed a need for more workers.

In addition, the low participation rate that we are experiencing in the labor force has led to the increase in wages that we have seen. This trend looks to continue and should add to inflation from wage pressures.

Investors were closely watching Wednesday's 10-year Treasury Note auction and Thursday’s 30-year Bond auction to see the level of demand. High demand, which is reflected in the purchasing of Bonds and Treasuries, can push prices higher and yields or rates lower. Weak demand, on the other hand, can signal that investors think yields will continue to move higher, which can have a negative effect on rates.

Wednesday’s 10-year Treasury Note auction was met with about average demand and there was not much market reaction. Thursday's 30-year Bond auction was met with weak demand. After an initial move lower, Bonds shook off the news. Neither auction had much of an impact on trading last week.

Last week brought a double whammy when it comes to inflation, as the reports for April showed it is...