Vaccine Hope on the Horizon 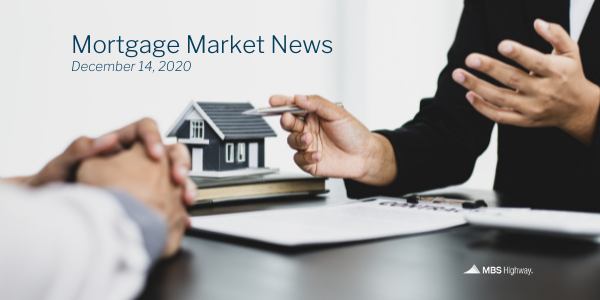 The rise in COVID cases and decline in Paycheck Protection Program money is having a worsening impact on businesses and workers around the country, unfortunately, as jobless claims trended in the wrong direction in the latest report. However, hope is on the horizon as a federal advisory panel recommended emergency use of Pfizer's vaccine, which could lead to distribution quickly as soon as it's approved by the FDA. 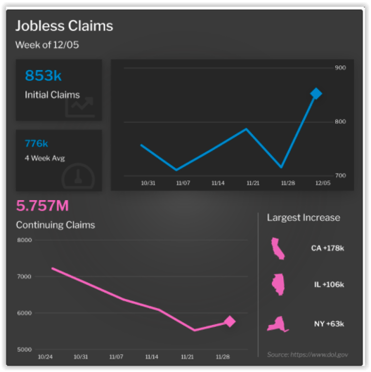 Another 853,000 people filed for unemployment benefits for the first time during the week ending December 5, which is an increase of 137,000 claims from the prior week. California (+178K), Illinois (+106K) and New York (+63K) reported the largest increases.

Continuing Claims, which measure people who continue to receive benefits, also increased by 230,000 to 5.575 million.

In addition, remember that when regular benefits expire, people can file for Pandemic Emergency Unemployment Compensation (PEUC), which extends their benefits for another 13 weeks. The number of Pandemic Unemployment Assistance claims did decline by 313,000, but unfortunately for all the wrong reasons as benefits are expiring.

Keeping an Eye on Inflation

Inflation was also tame at the wholesale level, as November's Producer Price Index showed that headline inflation increased by 0.1%, which was in line with market expectations. On a year over year basis, headline PPI increased from 0.5% to 0.8%. The Core rate, which again strips out volatile food and energy prices, was also up 0.1% for the month, and increased from 1.1% to 1.4% year over year.

While these numbers are still relatively low, the year over year readings could continue to move higher as demand outpaces supply for goods and services. Those higher producer costs could translate to higher consumer costs and inflation.

Why does this matter?

While inflation remains tame now, there is a point to note from the latest National Federation of Independent Business Small Business Optimism Index, which dropped 2.6 points in November to 101.4, a three-month low. Within the report, those seeing higher selling prices rose 3 points to the highest level since May 2018, which is just 1 point from matching the highest since 2008. This data speaks to businesses not having enough people to help their supply meet demand, which is a sign that temporary inflation could be on the horizon.

What causes this confusion?

Home prices have appreciated in the last year, but only 7% per the latest reports. Meanwhile, rates have fallen in this same period. This means that for many people, the monthly principal and interest payment to buy a home today could actually be lower than last year!

In addition, weekly earnings have risen 5.9%, so some people have even more money each month to put toward their mortgage and other monthly expenses.

The bottom line is that there is reason to feel positive and not negative about the housing market. With rates near all-time lows, there are great opportunities for people hoping to buy a home next year!