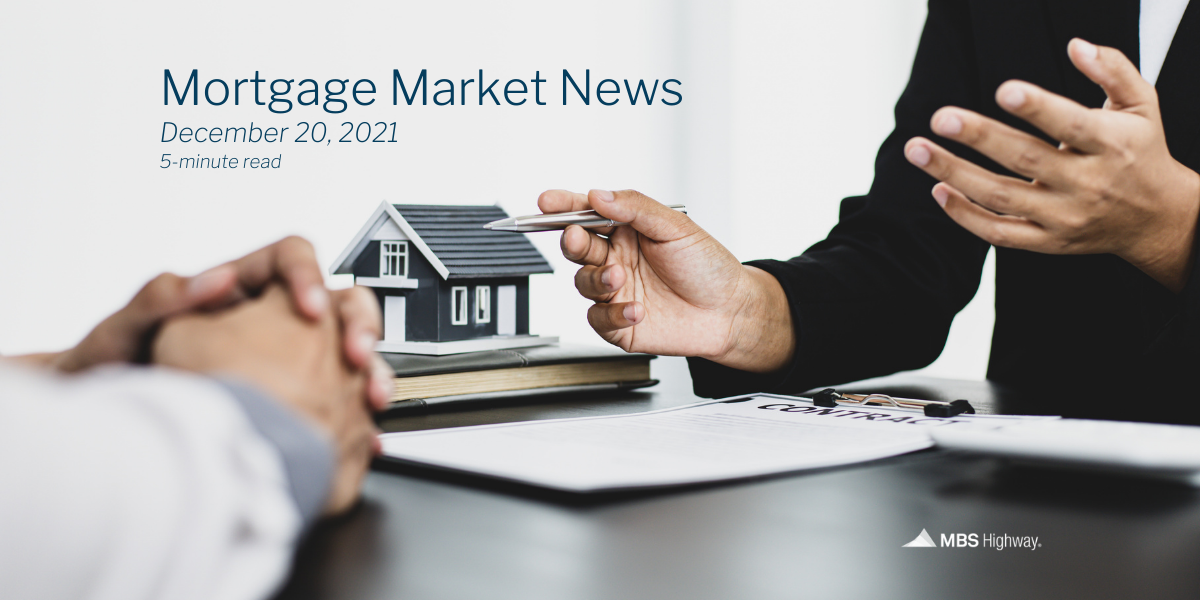 Inflation continues to climb while the demand for homes has helped builders remain confident. Plus, the Fed’s meeting brought important updates!

The Producer Price Index (PPI), which measures inflation on the wholesale level, rose 0.8% in November and increased from 8.6% to 9.6% on a year over year basis. This is the highest level in 41 years!

Core PPI, which strips out volatile food and energy prices, rose 0.7% in November. The year over year rate increased to 7.7%, up from an already hot 6.8%.

There are no signs of producer prices easing, which often leads to hotter consumer inflation levels, as producers pass those higher costs along to consumers.

Remember, inflation is the arch enemy of fixed investments like Mortgage Bonds because it erodes the buying power of a Bond's fixed rate of return. If inflation is rising, investors demand a rate of return to combat the faster pace of erosion due to inflation, causing interest rates to rise. Though many factors influence the markets, keeping an eye on inflation remains critical.

On a related note, the National Federation of Independent Business Small Business Optimism Index rose slightly in November. But the important components within the report showed that current and future compensations plans held at record highs and plans for higher prices rose to the highest level since 1979. This makes sense with the significant increase in producer prices and sounds like more inflation may be on the horizon.

In addition, the Cass Freight Index showed that shipping costs rose to a new record high, up 8% in November and 44% year over year. From an inflation standpoint, we are continuing to see supply chain disruptions, causing higher prices and contributing to higher goods.

Inflation also seemed to impact Retail Sales in November, which rose a modest 0.3% after the 1.8% gain seen in October. However, consumer demand remains strong, as sales were 18.2% higher than November of last year. Low unemployment, rising wages and savings from stimulus payments have enabled spending. Plus, some of the slowness in November’s sales may also be due in part to consumers shopping for the holidays early to avoid empty shelves.

Back in November, the Fed announced that they would begin tapering, or reducing, their purchases of Mortgage Backed Securities (also referred to as Mortgage Bonds or MBS) and Treasuries starting by $15 billion dollars a month. These purchases that began during the pandemic have been ongoing to help stabilize the markets and have helped keep home loan rates low.

However, after last week’s meeting, the Fed announced that they would be doubling the size of their taper of Mortgage Bonds from $15 billion a month to $30 billion a month.

Why did they do this?

The Fed has made it clear that they don’t want to make any hikes to their benchmark Fed Funds Rate and taper at the same time. Note that the Fed Funds Rate is the interest rate for overnight borrowing for banks and it is not the same as mortgage rates.

So, the sooner that the Fed can be done with tapering their outright purchases (i.e. bring them down to zero), that’s when they can begin to think about hiking their Fed Fuds Rate, which is the real tool the Fed has to help curb rising inflation.

Speaking of inflation, the Fed sharply raised their inflation forecasts for 2021 and 2022. They expect their favored measure, Personal Consumption Expenditures, to show inflation rising 5.3% this year, up from their previous forecast of 4.4%. Their forecast for 2022 has also grown from 2.3% to 2.6%.

The National Association of Home Builders Housing Market Index, which is a real-time read on builder confidence, rose 1 point to 84 in December, tying the highest reading of the year that was previously recorded in February.

Looking at the components of the index, current sales conditions rose 1 point to 90, sales expectations for the next six months were unchanged at 84, and buyer traffic rose 1 point to 70

Any reading over 50 on this index, which runs from 0 to 100, signals expansion. Despite inflation concerns and ongoing production bottlenecks that builders are facing, confidence has risen in recent months due to the continued high demand for homes around the country.

In fact, Lennar, one of the nation’s largest homebuilders, noted in a recent press release that, “Our record fourth quarter results reflect both continued strength in the housing market across the country, and continued housing supply shortage driven by limited entitled land, labor and supply chain constraints, and 10 years of production shortfall.”

This ongoing dynamic of high demand and tight supply is supportive of home prices.

Housing Starts, which measure the start of construction on homes, rose by almost 12% in November to an annualized pace of 1.679 million homes. This is 8.3% higher than November of last year.

Starts for single-family homes, which are in such high demand among buyers, were also up 11.3% from October to November. Yet, they are still nearly 1% lower than they were in November of last year.

Building Permits, which are a good forward-looking indicator for Housing Starts, rose by 3.6% and they were also up almost 1% year over year. Single-family permits also ticked higher by 2.7%, but they are still down 4.5% annually.

One of the biggest takeaways is that the backlog of homes continues to grow and speaks to the difficulty builders have experienced in completing homes. Homes authorized but not yet started increased by 1.5% in November and they were up 46% year over year.

The number of people filing for unemployment benefits for the first time increased by 18,000 in the latest week, with Initial Jobless Claims reported at 206,000.

However, this figure is coming off the lowest reading in 52 years, so the bounce higher is understandable.

Continuing Claims, which measures individuals who continue to receive benefits, decreased by 154,000 to 1.85 million, once again reaching a pandemic-era low.

There are now just under 2.5 million people in total receiving benefits, which is a healthy number and in stark contrast to the 20 million plus seen last year.

It also reflects that employers are having a hard time finding new workers and are reducing their pace of firings.

Manufacturing activity in the New York region remained strong this month, as the Empire State Index rose 1 point to 31.9. This was above the expected reading of 25. However, the Philadelphia Fed Index showed that manufacturing activity in that region fell to 15.4 in December from 39 in November, coming in much lower than expectations amid elevated inflation. However, any reading over zero on both indexes indicates improving conditions.