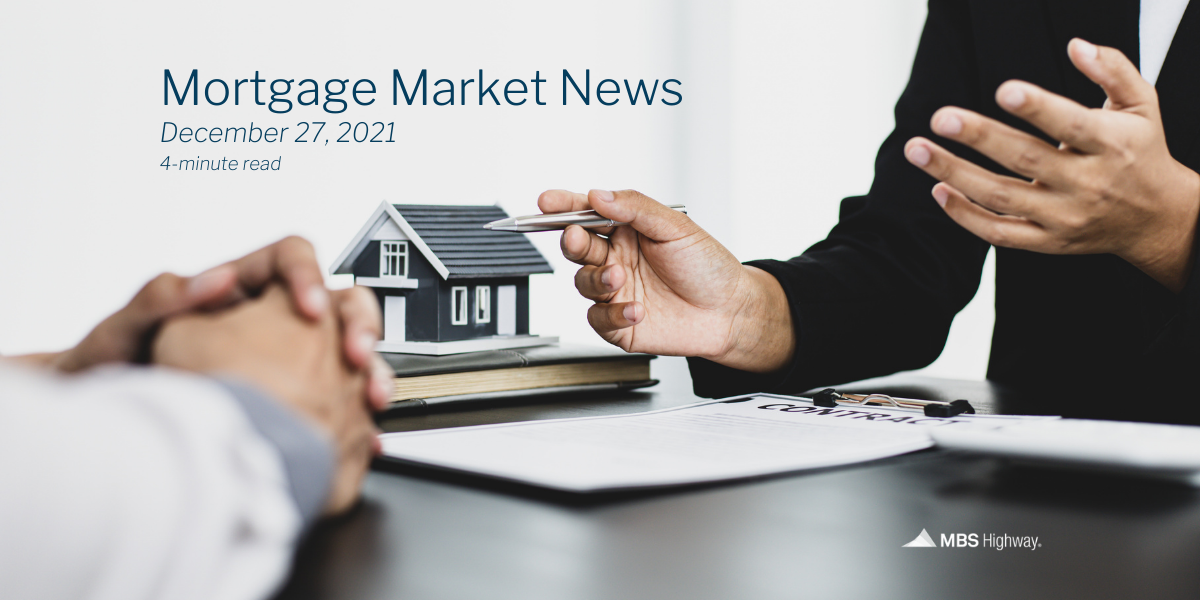 Inflation and home sales were on the rise in November, while Jobless Claims continue to reflect healthy, pre-pandemic levels.

The Fed’s favorite measure of inflation, Personal Consumption Expenditures, showed that headline inflation rose 0.6% in November, which was hotter than anticipated. This caused the year over year reading to increase from 5.1% to 5.7%, which is the hottest reading in almost 40 years!

Core PCE, which strips out volatile food and energy prices and is the Fed’s real focus, was up 0.5%, which was also above the consensus. The year over year reading increased from 4.2% to 4.7%. 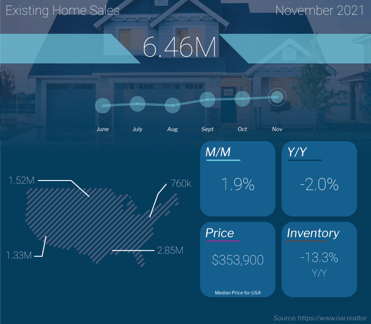 Existing Home Sales, which measure closings on existing homes, were up 1.9% from October to November to an annual pace of 6.46 million units.

However, the low inventory of homes around the country remains a challenge for many buyers, as there were only 1.1 million homes for sale at the end of November. This is down nearly 10% from October and 13.3% year over year. Inventory is nearing the record low levels of just above 1 million that were seen earlier this year. The continued strong demand for homes and near record low inventory remains supportive of home prices.

First-time homebuyers accounted for 26% of sales, which is down from 29% in October. This decline is concerning and it’s important to monitor if this is related to seasonal factors or part of a bigger theme. First-time homebuyers, after all, are the engine of the housing market.

Cash buyers remained stable at 24%, while investors purchased 15% of homes, which is down from 17%. Foreclosures and short sales accounted for less than 1% of all transactions. 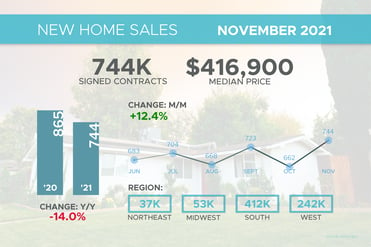 New Home Sales, which measure signed contracts on new homes, were up 12.4% from October to November at a 744,000 annualized pace. However, this doesn’t tell the whole story. Sales for October were revised lower from 745,000 to 662,000, so when factoring this in, New Home Sales are really unchanged from October’s original reporting.

Year over year sales were down 14%, but the annual comparisons to November 2020 are tough because of the abnormalities in the market due to the pandemic.

The median home price came in at $416,900, which is up from $407,700 in October, and up 19% from last year. Again, the median home price is not the same as appreciation. It simply means half the homes sold were above that price and half were below it. A greater amount of higher-priced homes are being built because there is no margin in lower-priced homes, so naturally the median price is being driven higher.

CoreLogic released their Single-Family Rent Index, showing that rents were up nearly 11% year over year in October, marking the sixth consecutive record high within this report. Detached rentals, which are in higher demand, rose by over 12% while attached rentals were up 9%.

Despite the challenges homebuyers are facing due to high demand, low inventory and an uptick in rates, there are still tremendous benefits in homeownership. Rents are rising aggressively, and renewals can continue to rise each year.

For instance, Realtor.com also reported data showing that rents were up almost 20% year over year in November. The national median rent reached $1,771, up almost $300 per month from last year. If we were to reverse engineer this at a 3.25% interest rate, it would equate to $70,000 in additional buying power for housing.

Remember that demographically, people are entering their 30’s in record-high numbers at almost 5 million per year, which should continue to provide robust demand for purchases and rentals. 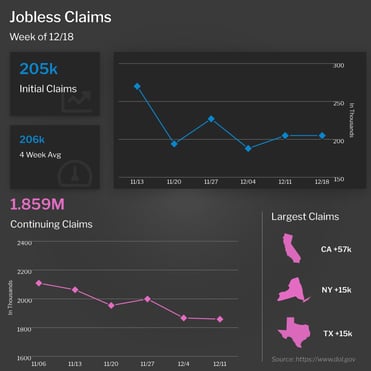 The number of people filing for unemployment benefits for the first time was unchanged in the latest week, as Initial Jobless Claims were reported at 205,000. This follows the 52-year low that was reported a few weeks ago and is a healthy level.

Remember that since this reading reflects the pace of firings and people filing for benefits, the lower the number the better.

Continuing Claims, which measures individuals who continue to receive benefits, decreased 8,000 to 1.859 million, once again reaching a pandemic-era low.

There are now 2.137 million people in total receiving benefits, which is a healthy number and in stark contrast to the 20 million plus seen last year.

It also reflects that employers are having a hard time finding new workers and are reducing their pace of firings.

The third reading of Gross Domestic Product (GDP) for the third quarter showed a slight revision higher from 2.1% to 2.3%, though this is still pretty anemic considering all of the stimulus. Investors were also closely watching last week’s 20-year Bond auction, which was met with above average demand. The bid to cover of 2.59 was higher than the one-year average of 2.34. Direct and indirect bidders took 85.6% of the auction compared to 78.2% in the previous 12.

The latest housing data shows that while homebuyer activity may be slowing, demand remains strong....