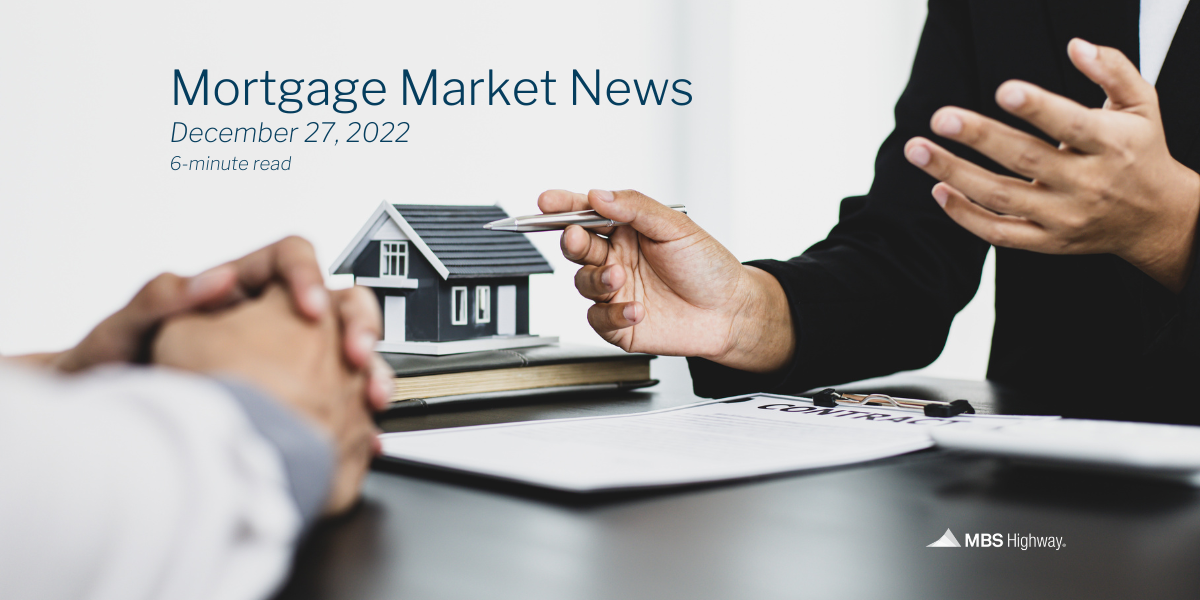 The markets had plenty of news to feast on last week, including the latest data on consumer inflation, home sales and home construction. Here are the highlights:

The Fed’s favorite measure of inflation, Personal Consumption Expenditures (PCE), showed that headline inflation rose 0.1% in November. The year-over-year reading for November declined from 6.1% to 5.5% and while this is a nice decline, it does factor in an upside revision to October’s data. Core PCE, which strips out volatile food and energy prices, rose by 0.2% with the year-over-year change falling from 5% to 4.7%. 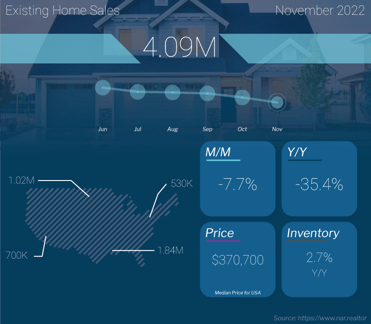 Existing Home Sales fell 7.7% from October to November to a 4.09 million unit annualized pace, per the National Association of Realtors (NAR). This was weaker than expectations looking for a 6% decline. Sales were also 35.4% lower when compared to November of last year. This is a critical report for taking the pulse of the housing market, as it measures closings on existing homes, which represent around 90% of the market.

What’s the bottom line? The rise in inventory that occurs every summer from parents listing their homes so their kids are settled for the new school year has clearly crested. Inventory has declined steadily over the last four months, from 1.31 million homes available for sale at the end of July to 1.14 million homes at the end of November. This equates to a tight 3.3 months’ supply of homes.

But inventory is even tighter than that figure implies, as there were only 752,000 “active listings” in November, meaning that 34% of the “inventory” in the Existing Home Sales report is under contract and not truly available. Even though sales have declined, this data also speaks to ongoing demand for homes, as a normal market has 25% of inventory under contract.

And while there are reports that homes are sitting longer on the market, they are still selling quickly when priced correctly, which is also reflective of demand. Average days on the market increased slightly from 21 days in October to 24 days in November, while 61% of homes sold last month were on the market for less than a month.

To summarize, low inventory and ongoing housing demand will continue to limit the downside in home prices. 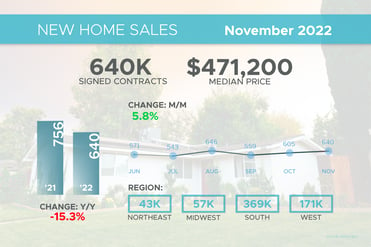 New Home Sales, which measure signed contracts on new homes, rose 5.8% in November to a 640,000-unit annualized pace, coming in much stronger than the 4.7% decline that was expected. There was a negative revision to October’s sales that made November’s gain appear a bit bigger, but even when factoring this in sales were up 1.3%.

The median home price for new homes was $471,200 but remember this is not the same as appreciation. It simply means half the homes sold were above that price and half were below it, and this figure can be skewed by the mix of sales.

What’s the bottom line? These sales figures were from November when rates were higher, so contract signings may continue to pick up. And while sales are now down 15.3% from November of last year, this year’s figure is not so bad considering higher rates, inflation and tight inventory.

Speaking of inventory, there were 461,000 new homes for sale at the end of November, which equates to an 8.6 months’ supply. However, only 64,000 were actually completed, with the rest either not started or under construction. The number of completed homes equates to a 1.7 months’ supply, well below a balanced market.

What the Home Construction Slowdown Means for Home Prices 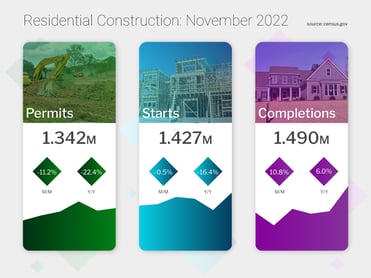 Housing Starts, which measure the start of construction on homes, fell 0.5% from October to November. Starts for single-family homes, which are the most important because they are in such high demand among buyers, declined 4.1% from October and 32.1% from November of last year. Building Permits for single-family homes, which are indicative of future supply, also fell 7.1% for the month and 29.7% year over year.

What’s the bottom line? There is a big difference between housing the economic driver and housing the investment. Clearly activity has slowed but the low supply environment in new homes (and in existing homes as noted above) will continue to be supportive of prices. This is a stark contrast to the housing crash where demand was lower, but builders were putting up a record number of homes. 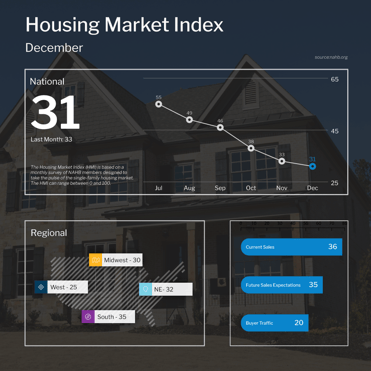 The National Association of Home Builders (NAHB) Housing Market Index, which is a near real-time read on builder confidence, fell 2 points to 31 in December. Among the components of the index, current sales conditions fell 3 points to 36, buyer traffic remained at a very low 20 and sales expectations for the next six months rose four points to 35.

What’s the bottom line? Any reading above 50 on this index, which runs from 0 to 100, signals expansion while readings below 50 signal contraction. This month’s confidence reading is the lowest since mid-2012 (except for the onset of the pandemic in the spring of 2020), which is unsurprising given that construction costs remain elevated while higher interest rates have caused many homebuyers to pause their search.

However, NAHB chief economist Robert Dietz, noted that December marked the first time since April that “builders registered an increase in future sales expectations.” He added, “The silver lining in this HMI report is that it is the smallest drop in the index in the past six months, indicating that we are possibly nearing the bottom of the cycle for builder sentiment.” 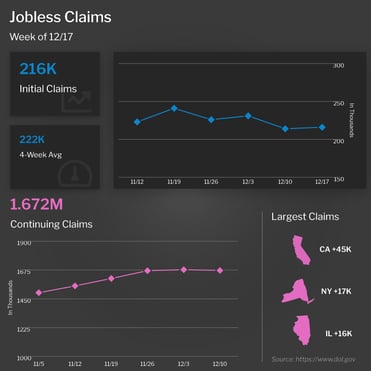 Initial Jobless Claims rose by 2,000 in the latest week, as 216,000 people filed for unemployment benefits for the first time. Continuing Claims, which measure people who continue to receive benefits after their initial claim is filed, fell 6,000 to 1.672 million, though the prior week’s report was revised higher by 7,000.

What’s the bottom line? Continuing Claims have now risen by 308,000 since the beginning of October. This is another sign of a potential slowdown in the pace of hiring, suggesting it’s becoming harder for many to find a job once they’re let go.

The final reading of third quarter Gross Domestic Product (GDP) showed that the U.S. economy grew by 3.2%. This is an upward revision from the first and second readings and also better than the 2.9% expected. GDP functions as a scorecard for the country’s economic health, so the positive reading in the third quarter is a welcome sign after two consecutive negative GDP readings in the first and second quarters of this year.

The weather isn't the only thing warming this spring, as home construction and consumer inflation...