Housing remains a bright spot in our economy, as record low inventory and high demand for homes continue to spark sales. Builders also remain confident despite
rising lumber prices thanks to the high demand for homes. Unfortunately, however, the pandemic's grip on unemployment remains tight and wholesale inflation was hotter than expected. 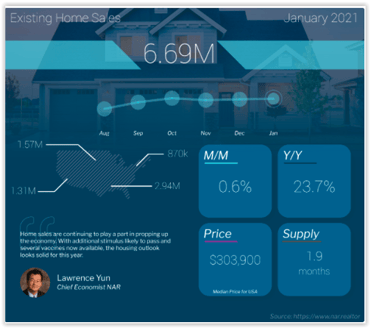 Existing Home Sales, which measures closings on existing homes, were up 0.6% in January, which was stronger than the slight drop expected. Sales are up nearly 24% compared to January of last year.

This is especially impressive, as there were only 1.04 million homes for sale at the end of January, which equates to a record low of just a 1.9 months' supply. Inventory dropped from the 1.07 million homes available at the end of December and it is also 26% lower year over year. Given the stiff competition and record-low inventory, it's understandable that homes were only on the market for 21 days on average.

The median home price was $303,900, up 14% year over year. Note, this is not the same as appreciation. It simply means half the homes sold were above that price and half were below it. Sales on the low end were down 15%, while sales on homes above $1 million were up 77%. This dragged the median home price higher.

First-time homebuyers increased from 31% in December to 33% in January, even with the stiff competition for homes on the lower end, while cash buyers remained stable at 19%. 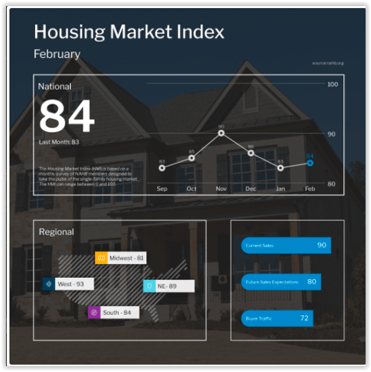 Builder confidence remains strong, due in part to the high demand for houses, per the National Association of Home Builders Housing Market Index. This real-time read on builder confidence rose 1 point to 84 in February, which was a bit stronger than expectations.

Any reading above 50 on this index that runs from 1 to 100 signals expansion. Builder sentiment remains well above that level and also near the highest levels on record.

Breaking down the three components of the index, current sales conditions was stable at 90, future sales expectations fell 3 points to 80, and buyer traffic rose 4 points to 72. 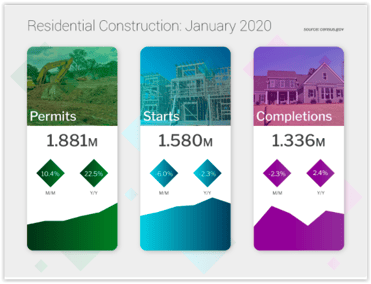 After a strong showing in December, Housing Starts (which measure the start of construction on homes) were down 6% in January and they were also 2.3% lower when compared to January of last year. Starts on single-family homes, which are in such high demand from buyers, fell 12.2% from December to January but they were up 17.5% year over year. Inclement weather across the country likely played a role in the monthly declines.

On a positive side, Building Permits (which are a sign of future construction) were up 10.4% from December to January and 22.5% year over year. Permits for single-family homes also moved higher, rising 3.8% from December and nearly 30% compared to January of last year. Hopefully building will continue to expand as we head into the warmer months, to help with the record low levels of homes that are available for sale. 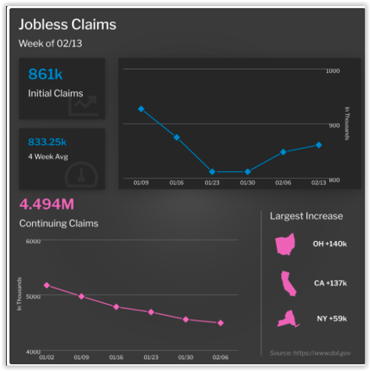 Continuing Claims, which measure people continuing to receive benefits, decreased by 64,000 to 4.5 million. Pandemic Unemployment Assistance Claims (which gives individuals benefits who would not usually qualify) and Pandemic Emergency Claims (which extends claims by 13 weeks after regular benefits expire) dropped by 258,000 and 718,000, respectively.

The bottom line is that the unemployment picture is not getting any better overall, and actually worsened in terms of new claims in the latest week.

The Producer Price Index (PPI), which measures wholesale inflation, rose by 1.3% in January, which was three times more than market expectations of 0.4%. On a year over year basis, headline PPI increased from 0.8% to 1.7%.

Core PPI, which strips out volatile food and energy prices, was up 1.2% for the month and increased from 1.2% to 2.0% year over year.

While this is a volatile report and there were some factors that contributed to the rise (for e.g., brokerage fees were up 9.4% and energy prices were much higher), inflation is always something we need to monitor because it reduces the value of fixed investments like Mortgage Bonds. And since home loan rates are inversely tied to Mortgage Bonds, when Bonds worsen or move lower, home loan rates can rise. Though many factors influence the markets, hints of inflation are crucial to keep an eye on.

The Empire State Index, which measures the health of the manufacturing sector in the New York region, was reported at 12.1 in February, up from 3.5 in January and twice the estimate. Prices received rose 8 pts to 23.4, which is the highest since May 2011 and shows some inflationary pressures.

We know that inflation on the goods side of the economy is occurring due to supply chain issues related to the pandemic, but the services sector is keeping inflation in check for now. However, once the COVID-19 vaccine distribution is more widespread and more businesses and activities open and resume, we could see services inflation return. But at the same time supply chain issues may be resolved, bringing down inflation on goods.

The bottom line is that we will need to closely monitor for any inflation risk later in the year, as rising inflation could impact both Mortgage Bonds and the home loan rates tied to them, as explained above.

All eyes were on Wednesday's 20-year Bond Auction, with investors looking to see the level of demand. High demand, which is reflected in the purchasing of Bonds and Treasuries, can push prices higher and yields or rates lower.

And last week's auction had very weak demand, with the bid to cover (which measures demand) of 2.15, well below the average since the 20-year auctions began last May.

The high demand for homes around the country has helped homebuilders remain confident, despite...