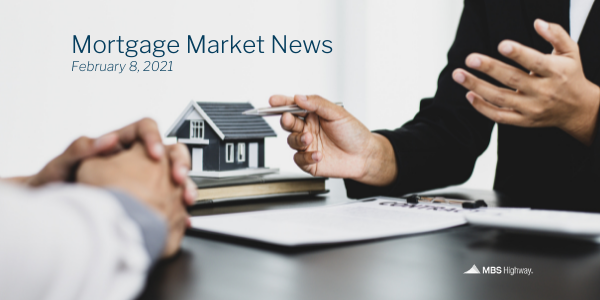 The latest employment reports show that the pandemic continues to take its toll on families and businesses around the country, as we are still down 10 million jobs compared to before the pandemic began. 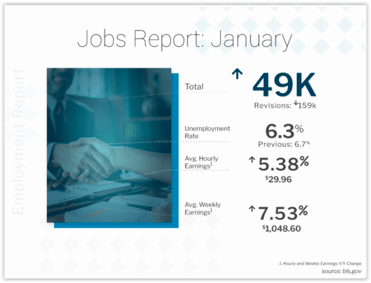 The Bureau of Labor Statistics reported that there were just 49,000 jobs created in January, which was in line with expectations. However, there were negative revisions to the data for both November and December, amounting to a loss of an additional 159,000 jobs in those months.

Looking more closely at the numbers, there are two reports within the Jobs Report and there is a fundamental difference between them. The Business Survey is where the headline job number comes from and it's based predominately on modeling.

The Household Survey, where the Unemployment Rate comes from, is done by actual phone calls to 60,000 homes. The Household Survey also has a job loss or creation component, which showed that there were 201,000 job creations, while the labor force decreased by 406,000. In addition, the number of unemployed people decreased by 586,000 but for the wrong reasons, unfortunately, as more people are leaving the labor force.

The Unemployment Rate improved from 6.7% to 6.3%, which is a sizable move lower. While this sounds like good news on the surface, it's important to dig deeper, as you may be wondering how the unemployment rate is 6.3% when we are still 10 million jobs lower compared to where our economy was before the pandemic.

The reason is that people who are unable to look for work due to pandemic reasons, who are still unemployed, are not counted. That number equates to 4.7 million people. When you add them back into the calculations, the real unemployment number is 9.3%.

In addition, there has been a lingering misclassification error where people were classified as absent from work for other reasons and not marked as unemployed on temporary layoff when they should have been. Without this error, the headline unemployment rate would have been 0.6% higher or 6.9%, while the real unemployment rate counting those who are unable to look for work due to pandemic reasons would be at 9.9%.

The all in U6 Unemployment Rate, which includes total unemployed, plus all persons marginally attached to the labor force, plus total employed part time for economic reasons, decreased from 11.7% to 11.1%.

Average hourly earnings increased from 5.1% to 5.4% year over year. Average weekly earnings, which we focus on more, rose 6.4% to 7.5%. Weekly earnings measure what people actually take home and this latest data shows that this level of income can support much greater levels of appreciation than we are currently seeing without homes being unaffordable. People don't use their entire income for their mortgage payment, so the weekly earnings figure does not have to rise at the same pace as appreciation. 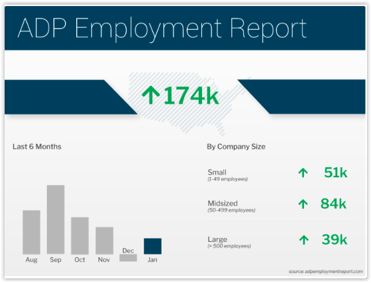 The ADP Employment Report, which measures private sector payrolls, showed that 174,000 jobs were created in January, which was stronger than the 49,000 job gains that were expected. December’s report was also revised higher by 45,000 jobs, decreasing the job losses in that month from 123,000 to 78,000 losses.

While January's job gains are certainly a step in the right direction, we need to make a much bigger dent in regaining the millions of jobs that have been lost throughout the pandemic. 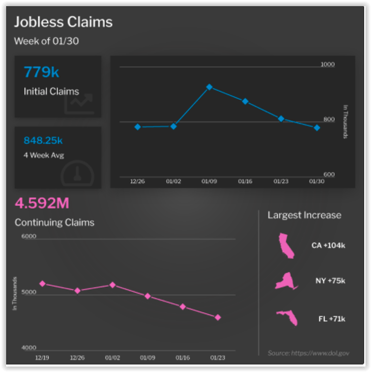 Initial Jobless Claims remain extremely elevated, unfortunately, as another 779,000 people filed for unemployment benefits for the first time in the latest week. This was a slight improvement, however, with a decline of 33,000 claims from the previous week.

Pandemic Unemployment Assistance Claims, which provide benefits to people who would not usually qualify, and Pandemic Emergency Claims, which extend claims by 13 weeks after regular benefits expire, also improved slightly. However, the number of people receiving these benefits remains in the millions, at 7.2 million and 3.6 million, respectively.

The latest CoreLogic Home Price Index report showed that home prices increased 1.0% from November to December and 9.2% on a year over year basis. This annual increase is a significant gain from the 8.2% year over year gain reported for November and the highest annual home price gain for this index since February 2014.

CoreLogic forecasts that home prices will rise 0.2% in January and 2.9% in the year going forward, which is better than the 2.5% annual forecast in the previous report (though still much lower than most forecasts). Remember, not that long ago they were expecting a 6.6% decline in home prices.