Finding and Amplifying Your Voice

As a frequent mortgage industry speaker and part of MBS Highway’s daily morning update team, I have encouraged people to use social media and video to amplify and grow their business. Yet, many people hesitate, either because they don’t know what to say or perhaps they even hate the sound of their own voice.

These are common fears and if you have them, you’re not alone.

Recently, I was given the opportunity to speak at an industry event – and it was unlike any other speech I had previously given.

It was about finding our voice. And I was terrified.

All my old fears, judgments and negative self-talk came rolling in. And then I took a deep breath and realized that this topic is exactly what I’ve always wanted to speak about. So instead of being afraid, I became curious. I asked myself, “What does it really mean to have a voice? How do we find our voice? When have we felt heard or unheard? How will past experiences influence our future voice? And why so often do we keep our voices small?”

This article is just the beginning of what I’ve learned about finding our voice, and how crucial it is. When we can communicate more effectively, in both personal and professional situations, both our relationships and our results improve.

Putting it simply, communication and the way we use our voice is everything.

Before we review the five elements of voice, it’s important to consider why we don’t use our voice in certain situations. Here are some of the most common reasons.

Past experiences of our voice being quieted or unwanted: I remember being in high school math class. Math was my favorite subject and one day I raised my hand to ask a question. The teacher replied, “Now, why would you do such a stupid thing? Have I taught you nothing?” This experience made me afraid to speak up in class and ask questions. It made me quiet my voice.

Toxic beliefs: Before joining the mortgage space, I helped women prep for bodybuilding shows. Oftentimes after a show, I would gain weight and this impacted both my confidence and my voice. I realized my voice depended on the outside look of my body. I had a toxic belief I was not worthy of love, clients, money, or good things unless I looked a specific way. This toxic belief even followed me into the mortgage realm when I initially kept my voice small and quiet. It wasn’t until I was able to change my belief that I was able to find my voice.

Discomfort: When I first joined the mortgage space, I had to learn the industry. Early on when my knowledge was limited, I remember feeling so uncomfortable speaking to other professionals because I worried that I provided zero value. I did the work and learned the industry, which helped me find my voice.

Fear: Fear is defined as an unpleasant emotion caused by the belief that someone or something is dangerous, likely to cause pain or a threat. I had massive amounts of fear the first time I spoke on stage. I was afraid people would judge me or not find what I had to say valuable, that they would think I was young and not take me seriously. I had to overcome these fears in order to find my voice.

Over the last few years, as I have become a frequent industry speaker and part of MBS Highway’s daily morning update video, I have learned so much about voice. One thing that helped me become better at communicating was learning about the five elements of voice and how to use them. This information is based on the Five Elements framework, which is a theory that says all things in the universe can be traced back to five basic elements.

Earth: Have you ever heard of grounding? It’s a technique that can lower your stress levels, among its many health benefits. Grounding is simply walking on the earth barefoot. When we think of the earth and its relation to voice, it is grounded, heavy and slow.

Think of Arnold Schwarzenegger’s classic line from The Terminator, “I’ll be back.”

I encourage you to practice stating that line exactly how he does. Really get into it. Now how do you feel? Speaking from the earth element, saying this line should feel like it comes from the stomach. And you want to use this voice when commanding respect. Use it when asking for a raise or directing your team. 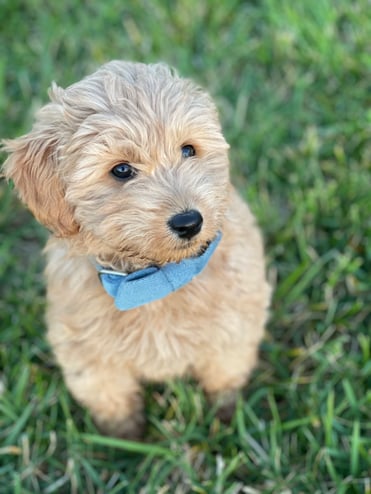 Or, even like me recently when I had to tell my new puppy, “NO!”

Let’s practice our earth voice. Looking at the adorable picture of my puppy, listen to the difference in saying a stern no, or saying no more softly. Do you hear how speaking from the earth element is different?

Fire: Speaking from the fire element brings energy and that energy spreads like wildfire around a room or audience. Imagine Martin Luther King, Jr.’s “I have a dream” speech but in the voice of Julia Childs. It just wouldn’t work. Use this element when you want to be seen or heard, be it on stage or even in a team meeting when you’re trying to literally “fire up” your team to reach their monthly sales goals.

Water: Voice within the water element is welcoming, flowing, caring and comfortable. This is a great voice to use when expressing empathy, gratitude or appreciation towards friends, family, colleagues or employees. And it matters. Think of someone apologizing to you, but you didn’t believe them because of the tone of their voice.

Metal: Speaking from the element of metal means your voice is bright, sharp and cuts through anything. Imagine a playground of screaming children, a crying baby, or a fire alarm – all of these would fit in the metal element. Use this voice when you want to amplify your message, when you really need to be heard. This is also the voice you’ll need to use if you’re ever speaking on stage and your microphone goes dead.

Air: Back to my puppy. Look at his face and practice saying, “Hi” to him. Do you feel how it’s light and airy? It lightens up your face and the room. This is a good voice to use when telling a story or pitching a new idea to your boss.

Now that we have gone through the five elements of voice. I want you to think about the last conversation you had where you didn’t feel heard or understood.

Consider the element(s) of voice you were using. For example, did you tell a colleague, “Sorry that deal didn’t close” but in the tone of metal because you were thinking of another major issue at the office?

Or maybe you asked your spouse or child to help with something at home, but an annoyed tone of metal made them angry and defensive, whereas a different element may have brought you the result you desired.

What we say and how we say it matters. As you approach conversations, ask yourself, “What are my goals for this conversation? And how can I use the five elements of voice to feel more heard and understood – and ultimately achieve the results I desire?”

While finding our own voice is important, it is also imperative to find our collective voice. Being part of a community like MBS Highway's Exclusive User Group on Facebook is a great way to connect with other mortgage professionals who are also dedicated to improving their own market knowledge so they can help their clients build wealth through real estate. Join now to gain access to exclusive insights, best practices and a community of top-performing MLOs around the country.