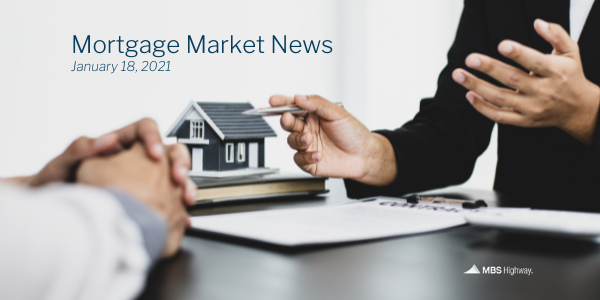 Jobless Claims continue to move in the wrong direction, as the number of Initial Jobless Claims currently being filed each week are around five times higher than before the pandemic began. The pandemic also continues to impact manufacturers and retailers around the country while inflation remains tame overall. However, plans for more stimulus are on the horizon.

Another 965,000 people filed for unemployment benefits for the first time during the week ending January 9, which was well above estimates of 765,000 claims and an increase of 181,000 from the previous week. California (+161K), New York (+56K) and Illinois (+45K) reported the largest increases.

Putting this into perspective, Initial Jobless Claims were around 200,000 a week pre-COVID, meaning claims are almost five times that amount nearly a year into the pandemic

Continuing Claims, which are delayed a week and which measure people continuing to receive benefits, increased by 199,000 to 5.3 million.

Pandemic Unemployment Assistance Claims, which give benefits to people who would not usually qualify, dropped by 941,000 to 7.4 million. Pandemic Emergency Claims, which extends claims by 13 weeks after regular benefits expire, also decreased by 325,000. Unfortunately, these decreases are likely due to benefits expiring rather than people finding employment.

The Producer Price Index (PPI), which measures wholesale inflation, rose by 0.3% in December, which was lower than market expectations of 0.4%. On a year over year basis, headline PPI remained stable at 0.8%. Core PPI, which strips out volatile food and energy prices, was up 0.1% for the month and decreased from 1.4% to 1.2% year over year.

On the consumer side, inflation was up 0.4% from November to December per the Consumer Price Index report. The year over year reading increased from 1.2% to 1.4%. About 60% of the rise was due to gasoline prices.

The Core Reading, which again strips out volatile food and energy prices, was up only 0.1% from November to December while the year over year reading remained stable at 1.6%. The services sector has been hit especially hard by the pandemic, and when we take service inflation out of the picture, goods prices were up 1.7% year over year – the fastest pace since April 2012. This is because of supply chain issues companies are having, which is causing the cost of goods to rise.

Also of note, rents are rising 2.3% across the US, which is down from 2.4% from the previous month. While many markets are seeing rents rise at a faster pace, some of the major cities are seeing sharp declines, which is dragging down the overall figure.

President-elect Biden released details for the American Rescue Plan. Among the highlights, his plan includes direct payments of $1,400. This would give many recipients a total of $2,000 when the amount is added to the $600 direct payments that were included in the bill which recently passed.

Minimum wage would also be increased to $15 per hour.

The proposal also includes another $25 billion to help renters (which is in addition to the $25 billion provided in December) and an extension of the eviction and foreclosure moratorium through September. People would also be able to apply for forbearance through the end of September.

Lastly, the proposal would expand the Child Tax Credit as well as make it refundable for the year.

The pandemic continues to impact manufacturers and retailers around the country. The Empire State Index (which shows the health of the manufacturing sector in the New York region) came in below expectations in January while December Retail Sales fell by 0.7% versus expectations of a 0.1% loss. Retail Sales in November were also revised lower by 0.3% to a loss of 1.4%.

Following suit, the National Federation of Independent Business Small Business Optimism Index dropped 5.5 points in December to 95.9, which is a 7-month low. Most of the categories were lower, with those who expect a better economy falling 24 points to -16.

NFIB Chief Economist Bill Dunkelberg said, “Small businesses are concerned about potential new economic policy in the new administration and the increased spread of COVID-19 that is causing renewed government-mandated business closures across the nation.”

Jobless claims remain at elevated levels, unfortunately, but there was a sliver of good news as the...