The Scoop on Home Price Appreciation 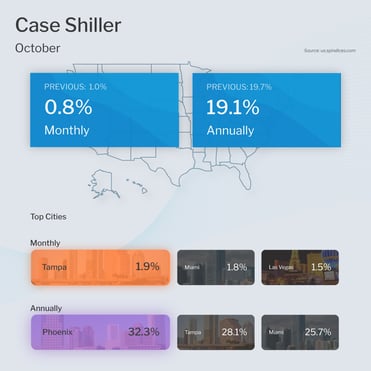 The Case-Shiller Home Price Index, which is considered the “gold standard” for appreciation, showed home prices rose 0.8% in October and 19.1% year over year. This annual reading was slightly lower than the 19.7% rise reported for September.

So, why are the year over year appreciation figures declining? Does this mean home prices are moving lower? 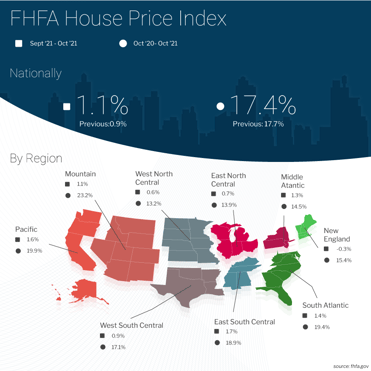 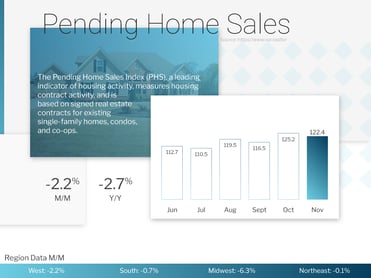 Pending Home Sales, which measures signed contracts on existing homes, fell 2.2% in November, which was short of the 0.5% expected increase. Sales are now down 2.7% year over year but are still quite strong when considering the lack of inventory and tough comparisons to last year due to the pandemic.

Lawrence Yun, chief economist for the National Association of Realtors, said, “There was less pending home sales action this time around, which I would ascribe to low housing supply, but also to buyers being hesitant about home prices.” He added, “While I expect neither a price reduction, nor another year of record-pace price gains, the market will see more inventory in 2022 and that will help some consumers with affordability.”

Yun also noted that housing demand remains high, and that homes placed on the market for sale go from “listed status” to “under contract” in approximately 18 days. 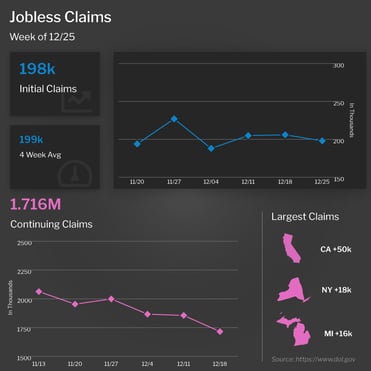 The number of people filing for unemployment benefits for the first time fell by 8,000 in the latest week, as Initial Jobless Claims were reported at 198,000.

Remember that since this reading reflects the pace of firings and people filing for benefits, the lower the number the better.

Continuing Claims, which measures individuals who continue to receive benefits, decreased 140,000 to 1.716 million, once again reaching a pandemic-era low.

There are now 2.177 million people in total receiving benefits, which is a healthy number and in stark contrast to the 20 million plus seen last year. It also reflects that employers are having a hard time finding new workers and are reducing their pace of firings.

Investors were closely watching two auctions for the level of demand. Tuesday’s 5-Year Treasury Note auction was met with above average demand. The bid to cover of 2.41 was higher than the one-year average of 2.37. Direct and indirect bidders took 80% of the auction compared to 76% in the previous 12.

However, Wednesday’s 7-Year Note auction was met with below average demand. The bid to cover of 2.21 was lower than the 1-year average of 2.29. Direct and indirect bidders took 78.8% of the auction compared to 78.1% in the previous 12.

Inflation, home prices and rents are all on the rise, while Initial Jobless Claims hit their lowest...