When Will the Fed Taper? 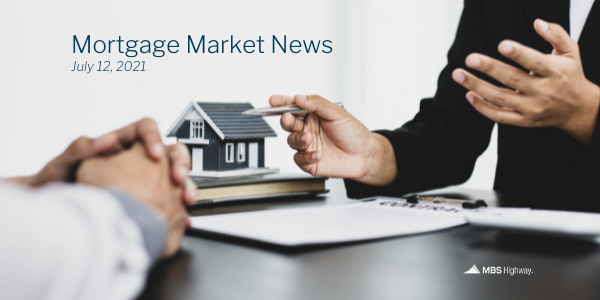 After the Independence Day fireworks on Sunday, the rest of the week was quiet with just a handful of economic reports to note. Plus, there’s talk of tapering from the Fed.

CoreLogic released their Home Price Index report for May, showing that home prices increased 2.3% from April. Prices also rose 15.4% on a year over year basis, which is up from the 13% annual gain reported for April.

CoreLogic forecasts that home prices will rise 0.8% in June and 3.4% in the year ahead. However, it’s important to note that CoreLogic has consistently under forecast both monthly and annual appreciation while then slowly revising their numbers higher. For example, just looking at the latest report, CoreLogic had forecasted 1.1% appreciation for May – and yet they reported 2.3%. In addition, they previously forecasted home prices would be down 6.6%...while we are up 15.4%. It is likely appreciation will be higher than what they have forecasted moving ahead, which is consistent with other forecasts out there. 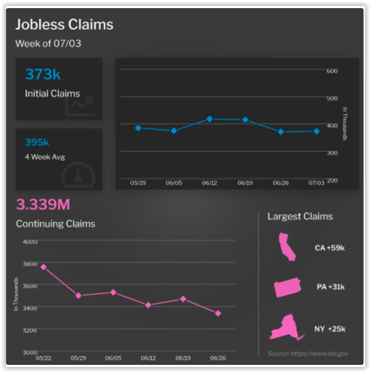 Initial Jobless Claims moved in the wrong direction in the latest week, as the number of people filing for unemployment for the first time rose slightly to 373,000. California (+59K), Pennsylvania (+31K) and New York (+25K) reported the largest number of claims.

However, the number of people continuing to receive regular benefits decreased by 145,000 to 3.3 million.

Pandemic Unemployment Assistance Claims (which provide benefits to people who would not usually qualify) and Pandemic Emergency Claims (which extend benefits after regular benefits expire) fell by 465,000 combined.

While there was not much of a change in Initial Jobless Claims, the significant declines in the number of continuing and extended benefits could be a result of the 22 states that have ended extra benefits thus far.

All in all, 14.2 million individuals are still receiving benefits throughout all programs, which is down 450,000 from the previous week.

On a related note, the JOLTS report showed that there were 9.2 million job openings in May, which is a record high. Though the JOLTS report is for May while weekly claims are more real-time, it will be important to see if the number of job openings declines in the coming months and especially come September once all states will be removing extra benefits.

Compensation Rising At a Record Level

The National Federation of Independent Business released its June Small Business Jobs Report, which noted that 46% of small business owners reported job openings they could not fill last month. This is down two points from May but still well above the 48-year historical average of 22%.

The minutes from the Fed’s June 15-16 meeting were released and they showed that there was disagreement between members over the process of tapering the Fed’s purchases of Mortgage Backed Securities (MBS) and Treasuries, which have been ongoing to help stabilize the markets.

Some members saw benefits to reducing the pace of MBS purchases in light of pressures in the housing market, whereas others felt both MBS and Treasuries should be reduced simultaneously. Fed officials noted that 'substantial further progress' toward their maximum employment and price stability goals has not yet been met, which remains a determining factor in their decision.

The Fed said that they would provide notice well in advance of an announcement to reduce purchases. This means, for instance, if they are considering tapering their purchases near the end of the year, they would have to announce this at their July 27-28 meeting in a few weeks, their meeting in Jackson Hole at the end of August, or their September 21-22 meeting. It’s likely we will get more clues at the meeting this month and estimate a taper plan announcement in August or September.

And of note, members also said that risks to inflation projections were tilted to the upside. This is significant because inflation reduces the value of fixed investments like Mortgage Bonds, to which home loan rates are inversely tied. In other words, rising inflation can cause Mortgage Bonds to worsen or move lower and home loan rates to rise. Though many factors impact the markets, inflation is always important to monitor.

The first week of November was filled with headlines on job creations, home price appreciation and...