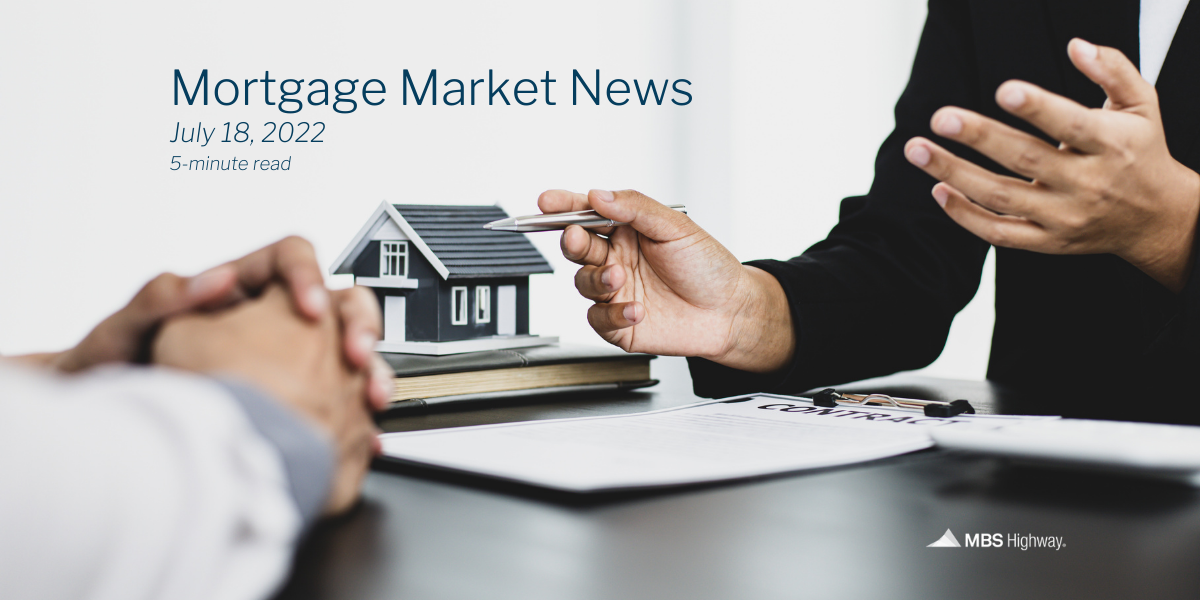 Inflation continues to soar on the consumer and wholesale levels while there are more signs that our economy is slowing. Here are last week’s key stories:

The Consumer Price Index (CPI), which measures inflation on the consumer level, rose 1.3% in June. This was even higher than the 1.1% increase that was expected. On an annual basis, inflation rose to a new cycle high from 8.6% to 9.1%, which is the largest 12-month increase since November 1981. Core CPI, which strips out volatile food and energy prices, rose 0.7%, just above the 0.6% gain anticipated. Year over year, Core CPI fell from 6% to 5.9%.

What’s the bottom line? To help cool inflation, the Fed has been hiking its benchmark Fed Funds Rate, which is the interest rate for overnight borrowing for banks and it is not the same as mortgage rates. So far this year, we have seen 25, 50 and 75 basis point hikes at their March, May and June meetings, respectively.

The Fed was expected to hike the Fed Funds Rate by 75 basis points at its meeting next week, but last week’s higher than expected inflation readings have added speculation that the Fed may even hike by 100 basis points. This remains a crucial meeting to monitor as we continue to deal with the soaring costs of goods.

The Producer Price Index (PPI), which measures inflation on the wholesale level, rose 1.1% in June, coming in hotter than expectations of 0.8%. On a year over year basis, PPI rose from 10.9% to 11.3%. Core PPI, which strips out food and energy prices, came in just below estimates with a 0.4% increase. The year over year figure declined from 8.3% to 8.2%.

Are Jobless Claims the “Canary in the Coal Mine?”

Initial Jobless Claims increased by 9,000 in the latest week, as 244,000 people filed for unemployment benefits for the first time. Continuing Claims, which measure people who continue to receive benefits after their initial claim is filed, fell by 41,000 to 1.331 million.

What’s the bottom line? While Initial Jobless Claims remain low, the 4-week average is at the highest level since December and it has been consistently moving higher. This trajectory higher is likely to continue, given the announcements of significant layoffs from several public companies, which means we will eventually see a higher unemployment rate. This report can be the “canary in the coal mine” to show that the job market is starting to soften.

We are seeing more inversions on the yield curve, including 1-year and 2-year yields moving higher than 10-year yields last week. This is unusual as typically you would expect to receive a higher rate of return if you put your money away for 10 years when compared to lesser timeframes. An upside-down yield curve has been a historically accurate recession indicator, as it is a symptom that the economy is slowing.

Speaking of slowdowns, the National Federation of Independent Business Small Business Optimism Index fell from 93.1 to 89.5 in June, which is the weakest reading since January 2013. Among the takeaways, owners expecting better business conditions over the next six months fell seven points to a net negative 61%, which is a new low in the 48-year history of the index. Only 3% of small business owners said now was a good time to expand their business, while 34% reported that inflation remained their top problem.

Another sign that things are slowing has come via the Cass Freight Index, which shows shipments of goods across the US. It contracted by 4.1% in June and 2.3% year over year and this is starting to show recession like conditions in shipping. Freight volume is also an extremely reliable early-recession indicator, so it’s important to closely monitor future reports.

However, Redfin also released a report that covered the June 5 to July 3 period, which factors in all of the rise in interest rates we’ve seen this year. Some notable statistics include:

What’s the bottom line? While buyers are seeing some relief, overall we are not yet seeing big changes from the blistering hot housing market last year. More than half of the homes out there are still selling above asking price and quickly. And while there are some listing price reductions, as on average 7% of homes for sale each week had a price drop, this shows that there is less demand and sellers who are not listing their homes realistically are having to make adjustments. Homes that are listed competitively are still selling quickly.