Inflation Is Rising! Is the Fed Prepared? 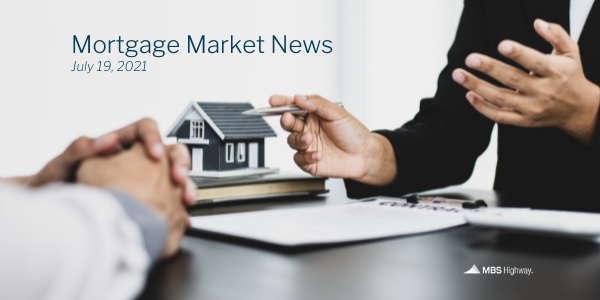 Inflation at both the consumer and wholesale levels came in much hotter than expected, and Fed Chair Jerome Powell made some important comments about this. Plus, Initial and Continuing Jobless Claims reached post-pandemic lows.

Inflation Much Hotter Than Expected

The Consumer Price Index (CPI), which measures inflation on the consumer level, rose by 0.9% in June, which was much hotter than the 0.5% increase that was expected. The year over year reading increased from 5% to 5.4%, which was the highest year over year increase in almost 13 years!

Core CPI, which strips out volatile food and energy prices, was also up 0.9% in June, almost double expectations. On a year over year basis, Core CPI increased from 3.8% to 4.5%, which is the highest year over year increase in 29 years!

Within the report, rents rose 0.2% in June, increasing by only 1.9% on a year over year basis. Owners’ equivalent rent rose 0.3% in June and 2.3% year over year. But there are several important things to understand about this data, which is based on a survey that asks homeowners, “If someone were to rent your home today, how much do you think it would rent for monthly, unfurnished and without utilities?”

Understandably, this is very subjective and many people would be guessing how much their home would rent for. This is the way the CPI tries to account for the change in home prices – and this component makes up 24% of the CPI report!

This data regarding rent is significantly lagging other rental indexes that have shown 5%+ increases in rental prices. In other words, an argument can be made that even though consumer inflation is hot, it could actually be hotter by 1% because this component of the index is so flawed.

However, on the other side of the coin, this type of inflation is not felt by everyone, as people only experience housing or rental inflation when they purchase or start a new lease agreement.

Is the Fed Blinded to Inflation?

One of the biggest questions right now is whether or not some of the factors influencing inflation are going to be transitory. Last week, Fed Chair Jerome Powell testified in front of Congress and in his prepared remarks, he said that the Fed will alter monetary policy only if inflation is materially and persistently on a higher path. However, he did state during the Q&A session that inflation was hotter than the Fed expected and that they expect hot inflation to continue until moderating in the medium term.

And of note, Treasury Secretary Janet Yellen said that she expects several more months of hot inflation, echoing his thoughts.

One thing that Powell may be looking at is the breakdown of the inflation data within the CPI report, as 10% of the components made up the majority of the rise. For example, items like cars and computers that need chips, leisure and hospitality, and airline tickets all rose 5% last month. When we look at the other 90% of the components, they only rose 0.2% from May to June and 2.1% year over year. The Fed seems to be banking on these being transitory bottlenecks.

Keeping an eye on inflation is always important and remains especially critical in the coming months, to see if these factors are indeed transitory. And watching to see what actions the Fed does – or doesn’t – take to alleviate inflation will be crucial as well.

Powell also reiterated that the Fed will be giving lots of notice before tapering their purchases of Mortgage Backed Securities (MBS) and Treasuries, which have been ongoing to help stabilize the markets. The Fed’s upcoming meetings should give further clarity regarding this timing. Given Powell’s comments, they may not be on pace to begin tapering until 2022. 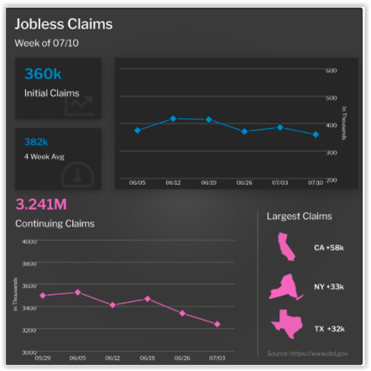 The number of people filing for unemployment for the first time fell by 26,000 in the latest week, as Initial Jobless Claims reached 360,000. California (+58K), New York (+33K) and Texas (+32K) reported the largest number of claims.

The number of people continuing to receive regular benefits also decreased by 126,000 to 3.2 million.

Pandemic Unemployment Assistance Claims (which provide benefits to people who would not usually qualify) and Pandemic Emergency Claims (which extend benefits after regular benefits expire) fell as well, by 334,000 combined.

All told, 13.8 million people are still receiving benefits throughout all programs, which is down 334,000 from the previous week. We have seen this number decline by roughly 800,000 over the past two weeks. Although this data is lagging (due to the time it takes people to find employment, and then for the reporting to occur), it would appear that we are seeing the impact from some of the states that cut extra benefits ahead of the Labor Day expiration.

A Note Regarding Housing Inventory

According to a new report from the National Association of Realtors, construction of long-term housing fell 5.5 million units short of historical levels over the past 30 years. To address the issue, the report shows that over 2 million housing units would need to be added per year.

While construction has picked up, even if building were to continue at the current pace, it would still take more than 20 years to close the 5.5-million-unit housing gap. This is further proof that inventory levels will remain tight for the foreseeable future, and this week’s upcoming reports on Housing Starts, Building Permits and Existing Home Sales will provide important news on construction and inventory as well.

All eyes were on Monday's 10-year Treasury Note Auction and Tuesday’s 30-year Bond Auction, with investors looking to see the level of demand. High demand, which is reflected in the purchasing of Bonds and Treasuries, can push prices higher and yields or rates lower.

Monday’s 10-year Treasury Note Auction was met with above average demand. The bid to cover of 2.39 was just under the one-year average of 2.42. Direct and indirect bidders took 81% of the auction compared to 77.5% of the auction in the previous 12. Mortgage Bonds improved on the news, while Treasury Yields fell from their intraday highs.

However, Tuesday’s 30-year Bond Auction was met with below average demand. The bid to cover of 2.19 was below the one-year average of 2.33. Direct and indirect bidders took 77.7% of the auction compared to 80% in the previous 12. Mortgage Bonds reacted negatively to the news.

Retailers had something to celebrate as sales rose by 0.6% in June, which was better than the expected 0.4% decrease. However, May’s figure was revised lower from a loss of 1.3% to a loss of 1.7%. And optimism is growing among small businesses, per the National Federation of Independent Business Optimism Index, which rose to 102.5 in June, the first time it was over 100 since last November.