The pandemic's impact on unemployment continues, as another 1.3 million people filed for unemployment benefits in the latest week. Over in the housing sector, confidence among builders was on the rise in July, while June's Consumer Price Index showed that consumer inflation rose after three previous months of declines. 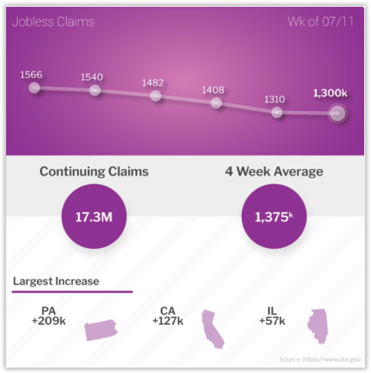 But … are things really improving?

There are also PUA or Pandemic Unemployment Assistance Claims that are not captured in the headline figure, and those totaled 928,000 in the latest week. Continuing PUA Claims are now above 15 million, which is significant!

This makes the total number of people receiving some type of benefit around 32 million, meaning it's possible that the unemployment rate is really over 20%. Because of this, unfortunately, it doesn't appear that the situation is improving in any meaningful way when we look at the amount of people who are receiving benefits.

The NAHB Housing Market Index, which is a real time gauge of builder confidence, increased 14 points, rising from 58 in June to 72 in July. All three components of the index increased, with current sales rising 16 points to 79 and sales expectations up 7 points to 75. It was especially encouraging to see buyer traffic jump 15 points to 58, moving from contraction territory (below 50) to expansion (above 50).

Housing Starts, which measure the start of construction on new homes, rose 17.3% in June. This was in line with estimates and a nice move higher. Housing Starts are now down only 4% on an annual basis, which is significantly improved from down 23% in the previous report. The gain was pretty much all in starts on single-family homes, which were up 17.2%.

Building Permits also saw an improvement from May to June, up 2.1%, though they are down 2.5% when compared to June of last year. Permits for single family homes also saw a big jump in June, up 11.8% from May.

The Latest on Consumer Inflation and Retail Sales

The Consumer Price Index (CPI), which measures inflation on the consumer level, came in at 0.6% in the month of June. While this increase ended three months of declines, the overall trend is that inflation remains tame. Of note, gasoline prices rose 12.3% in June, which was a big reason for the overall gain in inflation. The year-over-year reading increased from 0.1% to 0.6%.

Core CPI, which strips out food and energy prices, increased by 0.2% from May to June, while the annual reading remained stable at 1.2%. Within the reports, rents are rising 3.2% across the US, which is down from 3.5%.

There was some good news for retailers as sales increased by 7.5% in June, better than the expected 5.2% gain, while May's sales figure was revised higher by 0.5% to 18.2%. Sales at clothing and accessory stores shot up a whopping 105.1% in June, while sales at electronics and appliance stores, and furniture and home furnishing stores also saw nice gains.

There was some good news from the manufacturing sector, as July's Empire State Index showed that manufacturing activity in the New York region rose from essentially flat to 17.2. This is a big improvement from the -48 reading just two months ago. Meanwhile, the Philadelphia Fed Index showed a modest slowdown for manufacturing in that region in July, after a large expansion in June. However, July's reading was higher than expected.

There was also some positive news from the National Federation of Independent Business, as their small business optimism index for June increased to the best level since February.

The NFIB chief economist, Bill Dunkelberg, said "Small businesses are navigating the various federal and state policies in order to reopen their business and they are doing their best to adjust their business decisions accordingly. We're starting to see positive signs of increased consumer spending, but there is still much work to be done to get back to pre-crisis levels."