Sales of existing homes moved higher in June, thanks in part to some improvement in inventory. Construction data was mixed, however, though the demand for homes has helped builders stay confident despite supply, cost and labor concerns.

What the Median Price of Existing Home Sales Means

Existing Home Sales, which measure closings on existing homes, rose 1.4% from May to June. On an annual basis, they were up 23% compared to June of 2020, which makes sense given the pandemic-related shutdowns last year.

Inventory still remains a huge challenge for buyers, though we did see an improvement. There were 1.25 million homes for sale, which is up 3.3% from May and this also follows a 7% increase in the previous report. While inventory is still down 19% year over year, it is getting a bit better.

The median home price was reported at a record high $363,300, which is up 23.4% year over year. Though the media might report this otherwise, it’s really important to understand that the median home price is not the same as appreciation. It simply means half the homes sold were above that price and half were below it, and the rise is due to the amount of higher-end homes that are selling. Sales of homes beneath $250,000 were down 15%, while sales of homes over $1 million were up 150%. Real appreciation is around 14%, and while this is still a high number, it is significantly less than the 23.4% rise in the median home price.

First-time homebuyers have accounted for at least 31% of sales over the last 5 months. While affordability is certainly a bit tougher with higher home prices, rates are still very attractive and first-time home buyers are clearly hanging in there.

Meanwhile, cash buyers remained stable at 23%, though this number is up 16% from last year. Investors purchased 14% of homes, down from 17% from May. 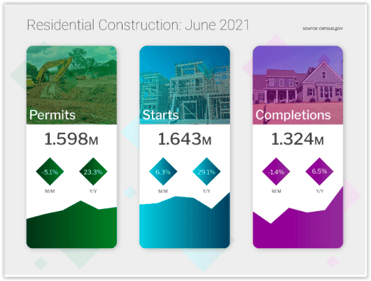 Housing Starts, which measure the start of construction on homes, were up 6.3% in June and 29% year over year. However, there was a negative revision to May’s figures and when taking this into account, the gain in June is really 4.5%. Starts for single-family homes, which are in such demand from buyers, were also up 6.3%.

While the increase in Housing Starts is a good sign, the decrease in Building Permits (which are a good forward-looking indicator) is concerning. Permits were down 5.1% from May to June, but they are 23% higher year over year. Permits for single-family homes also fell, unfortunately, dropping 6.3%.

Homes authorized but not started are up almost 60% year over year and this figure continues to climb, which shows us there are delays due to higher costs and labor issues. Single-family units completed are down 6% from May to June and 3% year over year. This speaks to the fact that builders can’t get appliances, which is another factor that’s delaying the completion process.

Overall, this was a mixed report. While higher Housing Starts in June will eventually lead to a little more supply once these homes are completed, looking beyond this, Permits are lower and supply constraints appear that they will be in place for quite some time. This should continue to be supportive of home price appreciation.

Builder confidence moved lower in July, as the National Association of Home Builders Housing Market Index fell one point to 80. While this index has been declining, a reading above 50 signals expansion and 80 is still a very strong level. The month of July is typically slower due to seasonality and there was also a heatwave that may have deterred some traffic.

Of the three components of the index, current sales conditions fell one point to 86, sales expectations for the next six months rose two points to 81, and buyer traffic dropped six points to 65.

The high demand for homes helped offset some of the challenges that builders are facing, as NAHB Chairman Chuck Fowke noted that, “Builders continue to grapple with elevated building material prices and supply shortages.”

In typical bubble-like conditions, like we saw during the last housing bubble, there is a decline in demand and a large amount of supply. Back in 2007, there were roughly 3.7 million homes for sale and not enough demand to sop up that supply.

If we fast forward to today, we have some of the tightest inventory ever, with only 1.2 million homes for sale. Additionally, demand is extremely strong and increasing due to demographics. When we look at supply and demand now compared to 2007, there are 12 million more households (demand) and 2.5 million fewer homes.

In fact, because there is so much demand and such a backlog, the country’s largest homebuilder, D.R. Horton, is pulling back on order activity to allow housing’s strained supply chain an opportunity to catch up with demand. In other words, there is so much demand that they have to purposely slow down building, as they don’t have enough supply of materials, labor and appliances.

While the pace of appreciation has been hot, and this may slow in the coming months, there is a big difference between slower home price growth and declines in prices. Plus, even though buying a home can be challenging right now, renting comes with its own challenges, including rising rental prices across the country. That’s why it’s so important to understand the current market dynamics when it comes to talk of a housing bubble. 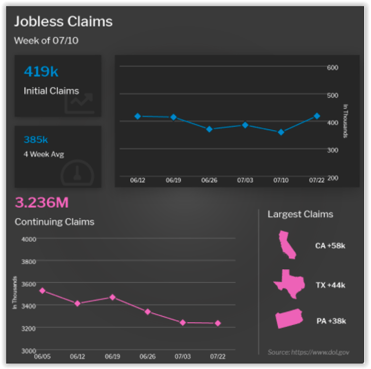 Initial Jobless Claims moved in the wrong direction in the latest week, as the number of people filing for unemployment benefits for the first time increased 51,000 to 419,000. California (+58K), Texas (+44K) and Pennsylvania (+38K) reported the largest number of claims.

However, the number of people continuing to receive regular benefits decreased 29,000 to 3.2 million, which is a post-pandemic low.

Pandemic Unemployment Assistance Claims (which provide benefits to people who would not usually qualify) and Pandemic Emergency Claims (which extend benefits after regular benefits expire) fell by 1.1 million combined, which is a significant improvement.

There are currently 12.6 million people still receiving benefits throughout all programs, which is down 1.3 million from the previous week. We have seen this number decline by roughly 2 million over the past three weeks. While this data is lagging due to the time it takes people to find employment, and then for the reporting to occur, it does appear that we are seeing the impact from some of the states that have cut extra benefits ahead of the Labor Day expiration.