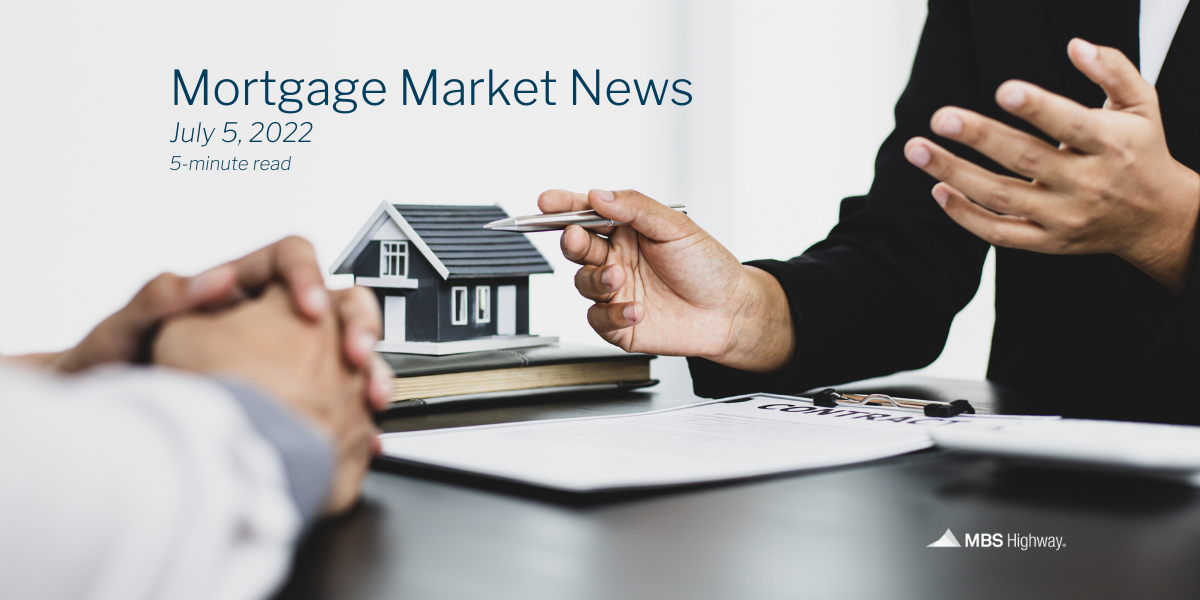 Consumer inflation remained near a 40-year high and home purchase activity stayed strong in May. Home prices also continued to rise in April. And with first quarter GDP reported at -1.6%, May’s lower than expected Personal Spending report was especially significant. Here’s what you need to know:

The Fed’s favorite measure of inflation, Personal Consumption Expenditures (PCE), showed that headline inflation rose 0.6% in May, which was slightly below the estimates of 0.7%. The year over year reading remained near a 40-year high of 6.3% but did not increase like many expected. Core PCE, which strips out volatile food and energy prices and is the Fed’s real focus, rose by 0.3%, also one tenth beneath expectations. Year over year, Core PCE decreased from 4.9% to 4.7%.

What’s the bottom line? Remember that the main tool the Fed uses to curb inflation is hiking its benchmark Fed Funds Rate, which is the interest rate for overnight borrowing for banks and it is not the same as mortgage rates. Counterintuitively, when the Fed hikes its benchmark Fed Funds Rate, this can be good for mortgage rates because it curbs inflation.

At its June meeting, the Fed hiked the Fed Funds Rate by 75 basis points due to high inflation, which was the largest increase since 1994. The Fed has stated that depending on the data, they will hike another 50 or 75 basis points at their meeting on July 26-27 and investors will be closely watching what actions the Fed takes later this month. 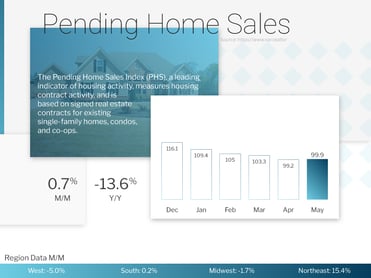 What’s the bottom line? Both the New and Pending Home Sales reports reflect buyers shopping for homes in May, during a time that factors in much of the rise in rates that we’ve seen this year. And while there is no doubt that higher interest rates are impacting demand, the fact that signed contracts for new and existing homes were higher in May even with the rise in rates, rise in home prices and lack of inventory shows that the purchase market remains strong. 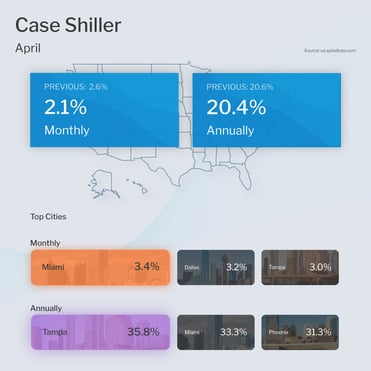 The Case-Shiller Home Price Index, which is considered the “gold standard” for appreciation, showed home prices rose 2.1% in April and 20.4% year over year. This annual reading is basically flat from the previous report…but still blistering hot.

The Federal Housing Finance Agency (FHFA) also released their House Price Index. This report measures home price appreciation on single-family homes with conforming loan amounts, which means it most likely represents lower-priced homes. Home prices rose 1.6% in April and 18.8% year over year. This is a slight decrease from the 19.1% rise reported for March, but again still extremely hot.

Rents are also on the rise, per Apartment List’s National Rent Report, which showed that rents increased by 1.3% in June and 14.1% year over year. Note that this report is for new rents. Renewals are rising in the high single digits year over year.

What’s the bottom line? While the Case-Shiller and FHFA reports are dated as they’re for April, appreciation was still extremely hot as of that time. In addition, though these reports do not fully take into account the rise in interest rates we’ve seen this year, they do include much of the increase. With appreciation still so strong through April, this is supportive of the belief that while we may see home price gains slow, we shouldn’t see decreases in pricing.

Will Doerner, Ph.D., Supervisory Economist in FHFA’s Division of Research and Statistics, said, “House price appreciation continues to remain elevated in April. The inventory of homes on the market remains low, which has continued to keep upward pressure on sales prices. Increasing mortgage rates have yet to offset demand enough to deter the strong price gains happening across the country.”

The final reading for first quarter GDP came in at -1.6%, which was a decline from the -1.5% reported in the second reading. While the textbook definition of a recession is two consecutive quarters of negative GDP, the National Bureau of Economic Research (NBER), who ultimately calls when we are in a recession, has expanded their definition. However, it would be hard to ignore two consecutive quarters of negative GDP, so it will be crucial to monitor how GDP performs in the second quarter.

And speaking of recession fears, a number of major manufacturing indices, including those for the New York, Philadelphia, Dallas and Richmond areas, have all reported negative numbers far worse than expectations.

Keeping an Eye on Jobless Claims 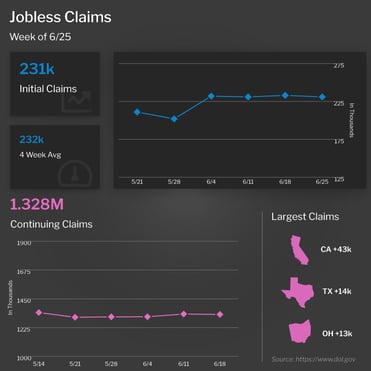 The number of people filing for unemployment benefits fell by 2,000 in the latest week, as 231,000 Initial Jobless Claims were reported. Continuing Claims, which measure people who continue to receive benefits after their initial claim is filed, decreased by 3,000 to 1.328 million, which is just above a 50-year low.

What’s the bottom line? While Initial Jobless Claims decreased in the latest week, the 4-week average is at the highest level since December and it has been consistently moving higher. So even though Initial Jobless Claims remain low, there is a clear trajectory higher, which should continue given the announcements of significant layoffs from several public companies. Once some of these layoffs are reflected in these numbers, we should see this figure really start to jump, which will lead to a higher unemployment rate.