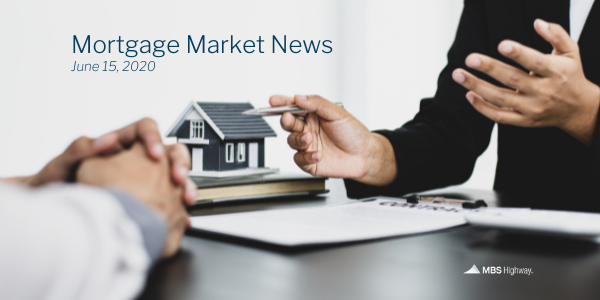 Unemployment remains a sobering reality for millions of people across the country, as another 1.5 million people filed claims for the first time during the week ending June 6.

Meanwhile, the Fed held their regularly scheduled Federal Open Market Committee meeting and noted that they expect very little inflation this year. Right on cue, the Consumer and Producer Price Indexes for May confirmed inflation remains tame due to the lack of pricing pressure. 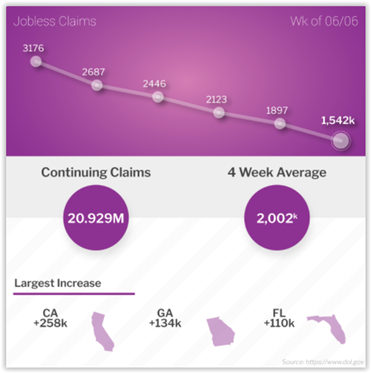 Another 1.5 million individuals filed for unemployment benefits for the first time during the week ending June 6, which was in line with estimates. California (+258K), Georgia (+134K) and Florida (+110K) once again posted the largest gains.

Continuing Claims, which measure people continuing to receive benefits, decreased by 339,000 to 20.9 million. This figure is backwards looking, so when we add the following two weeks of initial claims, there are now roughly 25 million individuals receiving benefits.

In addition, when we try to estimate how many new jobs the Paycheck Protection Program has temporarily created, we think that the unemployment rate could be closer to 20% without it.

The Fed Sings a Sobering Tune

Fed members held their two-day Federal Open Market Committee meeting Tuesday and Wednesday and left the benchmark Fed Funds Rate unchanged at zero. The Fed also said that they expect the Fed Funds Rate to remain at zero through 2022, with Fed Chairman Jerome Powell saying, “We’re not even thinking about raising rates.”

The Fed also noted that they will continue to purchase Mortgage Backed Securities and Treasuries at current levels, meaning they don't plan to taper those purchases any further.

Lastly, the Fed predicts there to be no inflation in 2020, around 1.5% in 2021 and less than 2% in 2022. While this points to a slow economy, it is a good sign for lower home loan rates because inflation reduces the value of fixed investments. This includes the Mortgage Bonds to which home loan rates are tied.

Inflation on the consumer level came in at -0.1% in the month of May per the Consumer Price Index while the year over year reading decreased from 0.3% to 0.1%. Core inflation, which strips out food and energy prices, dropped by 0.1% from April to May and from 1.4% to 1.2% when compared to May of last year. Again, this data speaks to a soft economy with no pricing pressure.

Within the report, it's interesting to note that rents of a primary residence dropped from 3.7% to 3.5%, showing that there is less demand and a lack of pricing pressure for rents. This makes sense with people moving out of city living and into the suburbs, which data in the HousingWire survey noted below also confirms.

Meanwhile, the Producer Price Index (PPI), which measures wholesale inflation, was up 0.4% in May, higher than the expected 0.1% estimate. On an annual basis, PPI came in at -0.8%, which was better than the expected -1.1% loss. The 12-month reading in negative territory again speaks to the lack of inflation we've been seeing. Core PPI, which strips out food and energy prices, did decrease by 0.1% from April to May and from 0.6% to 0.3% annually, which was in line with estimates.

Of Note in Housing… 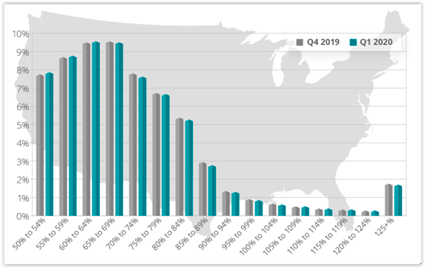 In addition, a HousingWire article showed that 26.1% of renters surveyed with leases expiring in the next six months said they are likely to renew their lease, 35.9% are likely not to renew and 38% are somewhat likely or not sure at the moment.

Renters who pay more than $1,750 a month are the least likely to renew at just 18.7%, while 41.6% said they are not likely to renew. This data speaks to the shift from city life to the suburbs that people are considering, and it may continue to fuel demand for housing.

On a positive note, small businesses were feeling more optimistic about the future in May, per the National Federation of Independent Business small business optimism index, which increased from 90.9 to 94.4. Plans to hire, capital spending and plans to increase inventory all rose, as did those who expect a better economy and higher sales. NFIB’s Chief Economist Bill Dunkelberg said, “It’s still uncertain when consumers will feel comfortable returning to small businesses and begin spending again, but owners are taking the necessary precautions to reopen safely.”

Inflation remains elevated at both the consumer and wholesale levels, while Initial, Continuing and...