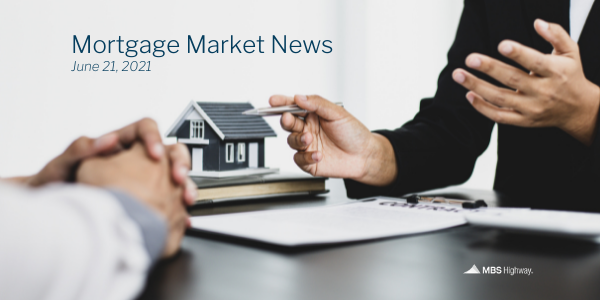 Inflation made headlines, as the Fed raised their inflation forecasts while annual wholesale inflation hit one of the hottest levels ever. Plus, higher costs and labor issues are impacting construction of new homes while Initial Jobless Claims increased in the latest week.

Wholesale Inflation Reading One of the Hottest Ever

The Producer Price Index (PPI), which measures wholesale inflation, rose 0.8% in May, which was hotter than the 0.6% expected. Year over year, PPI rose from 6.2% to 6.6% - one of the hottest readings ever!

Core PPI, which strips out volatile food and energy prices, rose 0.7% month over month and increased from 4.1% to 4.8% year over year.

One of the main reasons for producer inflation is the shortage of labor. The employment situation remains challenging for many families relying on schools or childcare to open fully and the availability of extended benefits has also impacted the labor force. Capacity utilization of factories is running at 75%, which means they have capacity to produce more but can't because they can't find enough workers, and this is causing prices to move higher.

Inflation is running very hot in both the Producer and Consumer reports and the Fed last week significantly raised their inflation forecasts, which caused the Bond market to sell off. The Fed now sees inflation averaging 3.4% in 2021, up from their original estimate of 2.4%. They do believe that inflation will fall back to 2.1% next year.

Why does high inflation matter?

Higher inflation typically drives home loan rates higher. That's because inflation is the arch enemy of interest rates, since it erodes the buying power of the fixed return that a mortgage holder receives. While many factors influence the markets, I will be keeping a close eye on all the latest inflation data, and its impact on Mortgage Bonds and the home loan rates tied to them. 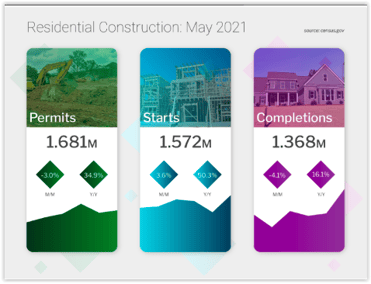 Housing Starts, which measure the start of construction on homes, were up 3.6% in May. While any increase is good news given the high demand for homes around the country, the reading was slightly beneath expectations. More importantly, however, Housing Starts on single-family homes were up 4.2%.

Building Permits, which are a good forward-looking indicator of construction, did fall 3% in May. Permits for single-family homes were also down 1.6%.

Single-family homes authorized but not started are up nearly 53% year over year, which points to delays due to higher costs and labor issues. 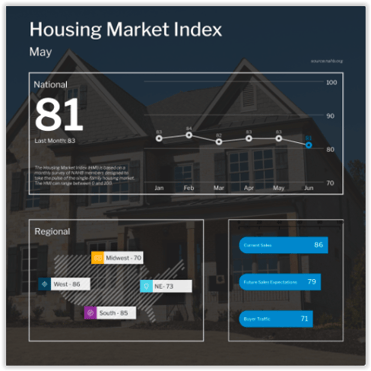 Builders actually cited "higher costs and declining availability for softwood lumber and other building materials" as the reason for the decline in builder sentiment in June. The National Association of Home Builders Housing Market Index, which measures builder confidence, decreased by 2 points from May's revised figure of 83 to 81 in June.

All three components of the index declined by two points as well. Current sales conditions fell to 86, sales expectations for the next six months came in at 79, and buyer traffic ticked down to 71.

While the readings with the NAHB Housing Market Index have declined in recent months, it's important to note that 81 is still an extremely strong level of confidence and is in the 98th percentile of readings dating back to 1985. For point of reference, any reading above 50 signals expansion.

Despite the scarcity of both labor and building materials, the high demand for homes continues to spur confidence among builders.

A Note About Rents

Recent reports show that rents are on the rise. Zillow reported that single-family rents were up 2.3% in May alone, due in large part to the lack of inventory. CoreLogic said that rents rose 5.3% year over year, which is the largest gain in nearly 15 years.

Rents for single-family detached homes (not townhomes) were up an even stronger 7.9% compared with a year ago, likely because individuals are seeking more outdoor space. Nearly half of millennials surveyed by CoreLogic and 64% of Baby Boomers said they “strongly prefer” to live in a single, stand-alone home. 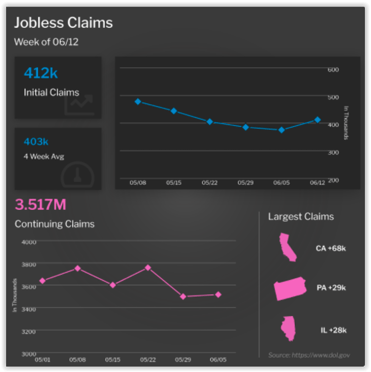 Initial Jobless Claims moved in the wrong direction in the latest week, as the number of people filing for unemployment for the first time rose by 37,000 to 412,000. California (+68K), Pennsylvania (+29K) and Illinois (+28K) reported the largest number of claims.

The number of people continuing to receive regular benefits was unchanged at 3.5 million.

Pandemic Unemployment Assistance Claims (which provide benefits to people who would not usually qualify) and Pandemic Emergency Claims (which extend benefits after regular benefits expire) decreased by roughly 325,000 combined.

All in all, 14.8 million individuals are still receiving benefits throughout all programs, which is down 560,000 from the previous week.

Retail Sales also came in below expectations in May, decreasing by 1.3% versus the expected 0.5% decrease. However, sales for April were revised sharply higher from no change to a gain of 0.9% and May's decrease likely reflects consumers shifting some of their spending to travel and other summer plans.

Consumer inflation was on the rise in May, while small business owners also expressed labor and...