Slow "Start" for Construction in May 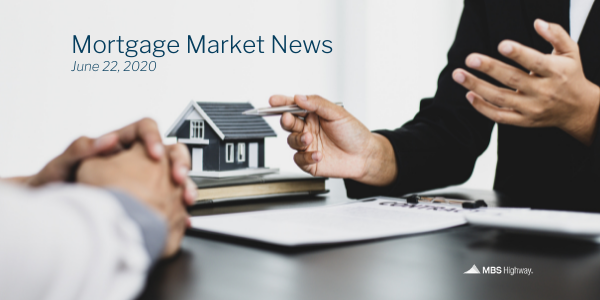 The number of people filing for unemployment for the first time remains in the millions, with figures pointing to an estimated staggering 16% unemployment rate currently.

The housing sector saw some positive news, however, as the National Association of Home Builders (NAHB) Housing Market Index confirmed that builder confidence is on the rise. Meanwhile, Housing Starts were up 4.3% in May, though this was much less than the 22% expected. Building Permits, on the other hand, were 14% higher, beating estimates of a 10% gain. 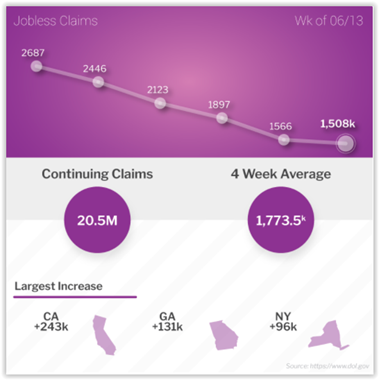 Another 1.5 million people filed for unemployment benefits for the first time during the week ending June 13. Though this was a decline from the previous week, the number of claims filed was 300,000 higher than estimates. California (+243K), Georgia (+131K) and New York (+96K) saw the biggest gains.

Continuing Claims, which measure people who continue to receive benefits, decreased by only 62,000 to 20.5 million. This figure is backwards looking, so when we add the following two weeks of initial claims, there are roughly 23.5 million people receiving benefits.

Builder confidence has been on the rebound in June, per the NAHB Housing Market Index. This real-time read on builder confidence increased by the largest one-month increase ever, rising 21 points from 37 in May to 58 in June (after plunging all the way to 30 in April).

There was improvement from May to June in all three components of the survey. Current sales conditions jumped 21 points to 63, future expectations were up by 22 points to 68 and prospective buyer traffic almost doubled from 22 to 43. Keep in mind that 50 is the baseline, with readings above 50 signaling expansion and below 50 contraction. So, while this was a good rebound, it’s still well below the numbers we were seeing just a few months ago before the pandemic, which were in the high 70’s. And prospective buyer traffic is still below the baseline reading and in contraction.

The NAHB noted the urban to suburban move being made by many, saying, “Builders report increasing demand for families seeking single family homes in inner and outer suburbs that feature lower density neighborhoods.”

The limited inventory of existing homes certainly helps the demand for new homes, as does low home loan rates. But there is a caveat, as the NAHB explained, “Elevated unemployment and the risk of new, local virus outbreaks remain a risk to the housing market.”

Construction Off to Slower "Start" Than Expected

Housing Starts were up only 4.3% in May, which was much less than the 22% expected. They were also down 23% when compared to May of last year. Starts for single family homes were flat and saw no gain.

Building Permits, on the other hand, shot up 14%, which was better than the 10% increase expected (though they are still down 9% when compared to last May). Permits for single family homes were up 12%.

Many people thought Housing Starts would rebound sooner, but builders were not purchasing land because they thought that demand for housing would return more slowly. In addition, available labor and material costs were an issue. But with Building Permits on the rise, Housing Starts may really rebound in June and moving forward. Again, as noted above, low home loan rates will help with demand, but continued high unemployment and potential future outbreaks of the virus will also be a limiting factor.

Retail Sales and Manufacturing on the Upswing

Retail Sales in May were up 17.7% after falling 14.7% in April – more than double the expected 8% gain. Clothing and accessories stores reported a whopping 188% gain, while furniture stores (+89.7%) and sporting goods, hobby, musical instruments and book stores (+88.2%) also saw big improvements. We will see how these figures continue to change and hopefully improve as states continue to reopen.

Manufacturing in the New York region also saw a big improvement, as the Empire State Index rose from -48.5 to flat in June. The Philadelphia Fed Index was another positive sign for manufacturing in that region, with June's reading reported at 27.5, greatly exceeding expectations of -22.7.

Fed In the News

The Fed announced that they would be buying corporate bonds on top of the exchange-traded funds they are already buying. The Fed will begin buying a broad and diversified portfolio of corporate bonds to support market liquidity and the availability of credit for large employers. The program will allow for the purchase of up to $750 billion worth of corporate credit with maturities of 5 years or less.

Fed Chair Jerome Powell testified on Capitol Hill that the program fulfills a pledge the Fed made previously, and he noted that the program is not an effort to take over the market. He reiterated that the Fed will adjust their bond buying based on market conditions.

The high demand for homes around the country has helped homebuilders remain confident, despite...