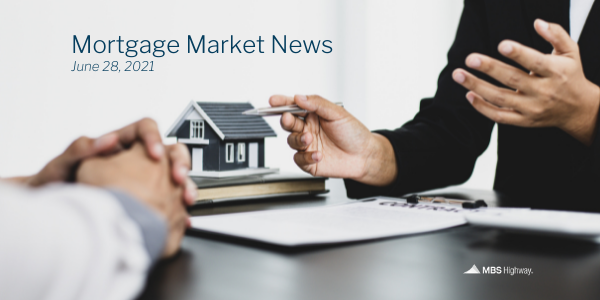 Inflation Hot But Below Expectations

The Fed’s favored measure of inflation, Personal Consumption Expenditures (PCE), showed that headline inflation was up 0.4% in May, which was beneath estimates of 0.6%. Year over year, the index increased from 3.6% to 3.9%, and while this is the hottest reading in 13 years, it was also beneath expectations of above 4%.

Core PCE, which strips out volatile food and energy prices and is the Fed’s real focus, was up 0.5% for the month. Year over year, Core PCE increased from 3.1% to 3.4%. These figures were as expected.

This rise in inflation has been expected because the readings for the more current months are replacing the readings from 2020 when much of the economy was shut down due to the pandemic. Even still, rising inflation is significant because inflation reduces the value of fixed investments. This includes Mortgage Bonds, to which home loan rates are inversely tied. In other words, rising inflation can cause Mortgage Bonds to worsen or move lower and home loan rates to rise. Though many factors impact the markets, I will continue to monitor the data regarding inflation this summer.

Of note within the PCE report, personal income was down 2%, which was slightly better than expectations, while personal spending was unchanged and lighter than estimates of 0.4%.

With respect to income, the most important component is wages/salaries for private industries. They rose 0.8% after two straight months of 1.1% gains, and they are also up by almost 16% year over year. Private sector employees make up a large portion of the homeownership rate, and with private sector wages growing at such a rapid pace, this does bode well for affordability even with the appreciation levels we’ve seen.

Several Fed members made headlines last week with comments about inflation. New York Fed President John Williams noted that he thinks most of the inflation we are seeing is due to the economy opening back up and a lack of supply, which he thinks will come back on line as people get back to work.

Fed Chair Jerome Powell also said that recent price gains mostly reflected temporary supply bottlenecks. He explained that the sharp drop in prices last spring at the onset of the pandemic makes inflation figures look much larger now compared with a year ago. This supports his stance that most of the inflation will be transitory. He did acknowledge that the effects of inflation "have been larger than we expected and they may turn out to be more persistent than we expected.”

Atlanta Fed President Raphael Bostic and Fed Governor Michelle Bowman also said they believe recent price increases will prove temporary, but they also feel it may take longer than anticipated for them to fade. In an interview with NPR, Bostic redefined for us his thoughts on transitory, saying that inflation may last six to nine months rather than the two to three months they expected initially.

Existing Home Sales, which measure closings on existing homes, were down 0.9% in May. However, on an annual basis, they are up nearly 45% compared to May of 2020, which makes sense as the pandemic and shutdowns were in full swing this time last year.

Inventory remains a huge challenge for buyers, though it did improve from April to May. There were 1.23 million homes for sale at the end of May, which is up 7% from April but down almost 21% year over year. The low level of homes helped them sell quickly, with homes only on the market for 17 days on average.

The median home price was reported at $350,300, which is a record high and up 24% year over year. Note that despite what the media is reporting, the median home price is not the same as appreciation. It simply means half the homes sold were above that price and half were below it, and the rise is due to the amount of higher-end homes that are selling.

And speaking to affordability, first-time homebuyers have remained at 31% for three out of the last four months, which is a decent level considering the stiff competition for homes on the lower end and the lack of inventory. Also of note, cash buyers decreased from 25% to 23% while investors purchased 17% of homes, which remained stable from April's report. 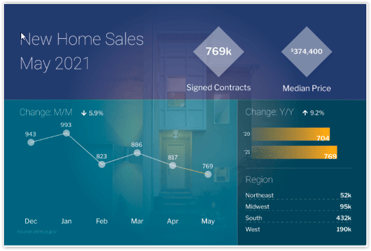 New Home Sales, which measure signed contracts on new homes, were down 6% from April to May. Factoring in the revisions to April’s sales, this figure is actually worse, totaling a 12% decline in May.

Inventory again remains a challenge, as there were only 330,000 new homes for sale at the end of May. This represents a 5.1 months’ supply of homes.

The median home price was reported at $374,400, which is up 18% from last year. Again, the median price is not the same as appreciation. Builders are not building many lower-priced homes as there is not enough profit margin due to the costs and shortage of lumber and other materials. As a result, the median home price is being dragged higher. 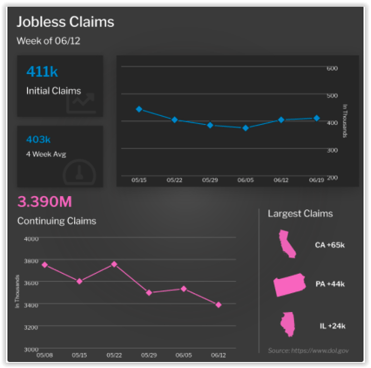 The number of people filing for unemployment benefits decreased by 7,000 in the latest week, as Initial Jobless Claims fell to 411,000. While any decline is positive, these claims are still more elevated than we’d hope for at this stage in our recovery. California (+65K), Pennsylvania (+44K), and Illinois (+24K) reported the largest number of claims.

The number of people continuing to receive regular benefits also fell by 144,000 to 3.4 million. While this is a pandemic low, it is also still elevated.

Pandemic Unemployment Assistance Claims (which provide benefits to people who would not usually qualify) and Pandemic Emergency Claims (which extend benefits after regular benefits expire) increased by 68,000 combined.

All in all, 14.8 million individuals are still receiving benefits throughout all programs, which is near unchanged from the previous week.