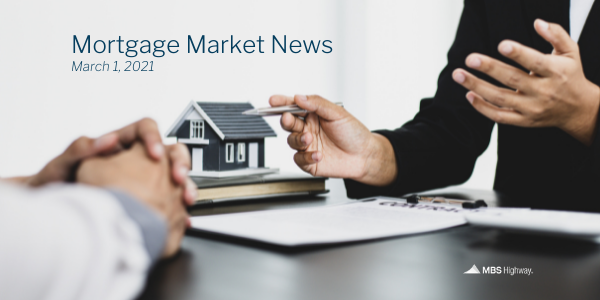 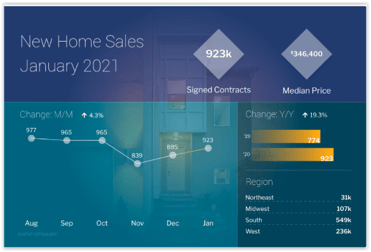 New Home Sales, which measure signed contracts on new homes, were up 4.3% in January, which was double market estimates. But that doesn’t tell the whole story. December's sales figure was revised much higher and factoring in this revision, sales are up 10% in January. Sales are also up over 19.3% when compared to January of last year.

The strong level of sales is especially impressive, given that inventory is down 6% with just 307,000 new homes for sale at the end of January, which represents a 4-month supply at the current sales pace.

The median home price was reported at $346,400, up 5.3% year over year. Remember this is not the same as appreciation. It simply means half the homes sold were above this price and half were below it. 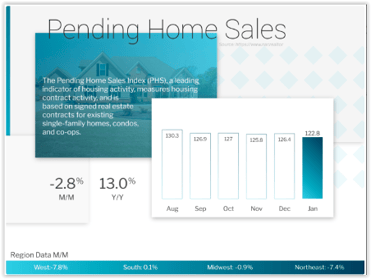 Pending Home Sales, which measure signed contracts on existing homes, fell 2.8% in January. However, they are up 13% compared to January of last year. This is pretty amazing in the face of record-low inventory levels of existing homes, which are down 24% annually.

Lawrence Yun, Chief Economist for the National Association of REALTORS®, noted that, "Pending home sales fell in January because there are simply not enough homes to match the demand on the market." But he added, "That said, there has been an increase in permits and requests to build new homes." 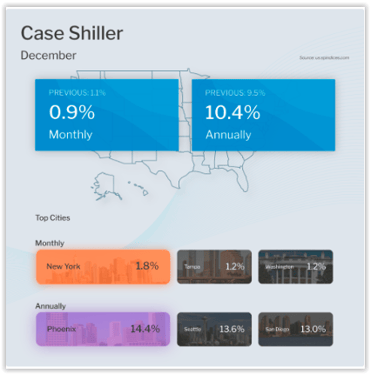 The Case-Shiller Home Price Index, which is considered the “gold standard” for appreciation, reported its biggest national gain in seven years. There was a 10.4% annual gain in home prices nationwide in December, up from an already strong reading of 9.5% in November. 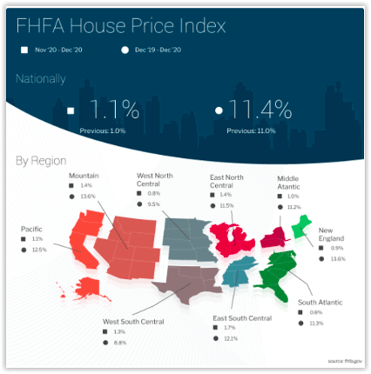 The Federal Housing Finance Agency (FHFA) also released their House Price Index, which measures home price appreciation on single-family homes with conforming loan amounts. Note that while you can have a million-dollar home with a conforming loan amount, the report most likely represents lower-priced homes, where supply is tightest, and demand is strongest.

As such, it should be no surprise that the FHFA House Price Index came in even stronger than the Case-Shiller Report. Home prices rose 1.1% from November to December and are up 11.4% year over year, higher than the 11.0% annual gain the FHFA reported in November.

Looking Past the Headlines on Initial Jobless Claims 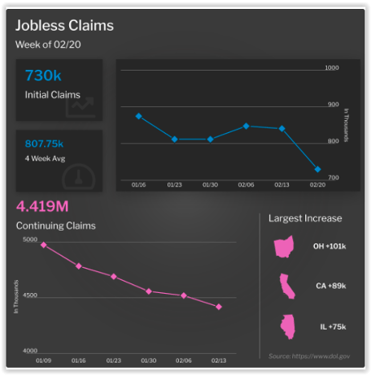 Another 730,000 people filed for unemployment benefits for the first time in the latest week, which was a decrease of 111,000. However, this drop is likely due to the weather conditions across the US, and especially the crisis in Texas last week, and needs to be taken with a grain of salt.

Continuing Claims, which measures people who continue to receive benefits, decreased by 101,000 to 4.4 million. Pandemic Unemployment Assistance Claims (which gives individuals benefits who would not usually qualify) decreased by 167,000, while Pandemic Emergency Claims (which extends claims by 13 weeks after regular benefits expire) increased by 1 million to the highest level since the pandemic began.

The bottom line is that, despite the headline drop in Initial Jobless Claims, unfortunately the unemployment picture has not really improved because that drop was likely due to bad weather and power outages preventing people from filing. In addition, the total amount of people receiving benefits worsened and increased. We still have a long way to go to return to pre-pandemic levels of unemployment.

The Fed’s favored measure of inflation, Personal Consumption Expenditures (PCE), showed that headline inflation was up 0.3% in January, which was in line with expectations. Year over year, the index increased from 1.3% to 1.5%, as expected.

Core PCE, which strips out volatile food and energy prices and is the Fed's real focus, was up 0.3% in January, which was hotter than the 0.1% rise anticipated. Year over year, Core PCE increased from 1.4% to 1.5%, which was slightly higher than market expectations of 1.4%.

Even with the Core rate coming in a bit hotter than expected, these levels show that inflation remains tame.

Why is tame inflation significant?

The massive stimulus plans have been causing fears of inflationary pressure. Even the hint or fear of inflation can cause Mortgage Bonds to worsen, which we've seen recently as they have fallen precipitously.

Though many factors influence the markets, it's especially important to monitor all the latest inflation news and data and its impact on the markets.

Lastly, Fed Chair Jerome Powell spoke in front of Congress and noted, “The economy is a long way from our employment and inflation goals, and it is likely to take some time for substantial further progress to be achieved.” He also reiterated that the Fed is not fearful of inflation.