Housing, Unemployment and the Fed Made Headlines

Inclement weather hindered home construction in February but homebuilders remain confident, despite rising lumber prices, thanks to the high demand for homes across the country.

Housing Starts Decline But Help Is On the Way

Housing Starts, which measure the start of construction on homes, fell 10.3% in February and 9.3% year over year. Starts on single-family homes were also down almost 9% from January to February and were pretty flat compared to February of last year. Bad weather across the US is the likely culprit for the decline.

Also of note, housing units that are authorized but not yet started for single-family homes are up 36% year over year.

The National Association of Home Builders Housing Market Index, which is a real-time read on builder confidence, dropped 2 points in March to 82, coming in slightly lower than expectations. However, any reading above 50 signals expansion, meaning builder sentiment remains well above that level and still near the highest levels on record. The main reason for the drop in confidence this month was costs, as rising lumber prices are adding approximately $24,000 to the cost of building a new home.

Remember that not long ago the reading for buyer traffic was below 50, so putting the numbers in perspective, future expectations and buyer traffic remain very strong even with the record low levels of inventory and rising rates we are seeing. 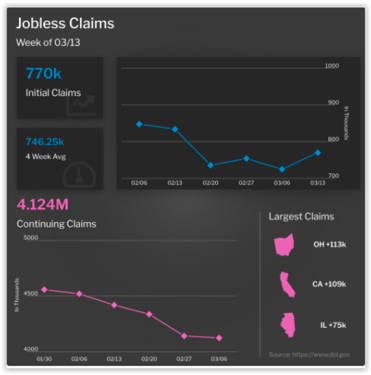 The number of people filing for unemployment benefits for the first time increased in the latest week, as Initial Jobless Claims reached 770,000. Ohio (+113K), California (+109K) and Illinois (+75K) reported the largest number of claims.

Continuing Claims, which measures people who continue to receive benefits, was little changed at 4.12 million.

Pandemic Unemployment Assistance Claims (which provides benefits to people who would not usually qualify) decreased by 773,000, while the Pandemic Emergency Claims (which extends claims after regular benefits expire), decreased by 640,000. These figures are volatile each week.

The bottom line, unfortunately, is that new claims are not improving and 18 million people are still receiving benefits throughout all programs, compared to just 2 million this time last year.

The Fed held their regularly-scheduled Federal Open Market Committee meeting and, despite the volatility in the markets, recent decline in Mortgage Bonds and forecasts for higher inflation, announced that they would not make any changes to their purchases of Mortgage-Backed Securities and Treasuries each month. The Fed noted that they will continue their current pace until seeing actual progress and could use the full extent of their tools should they need to.

The Fed was dovish on the economy, raising their forecasts for growth and inflation for 2021. They believe GDP will reach 6.5%, upgraded from 4.2%, while unemployment will drop to 4.5% by year's end instead of 5%. They see inflation reaching 2.4%, with Core inflation (which strips out volatile food and energy prices) reaching 2.2%.

Why is higher inflation significant?

Home loan rates are inversely tied to Mortgage Bonds, so when Bonds worsen home loan rates can rise, which has been the dynamic we’ve seen in the markets recently.

Though many factors influence the markets, inflation news is always important to monitor.

Homebuyers faced a double whammy in February as both low inventory and freezing temperatures...