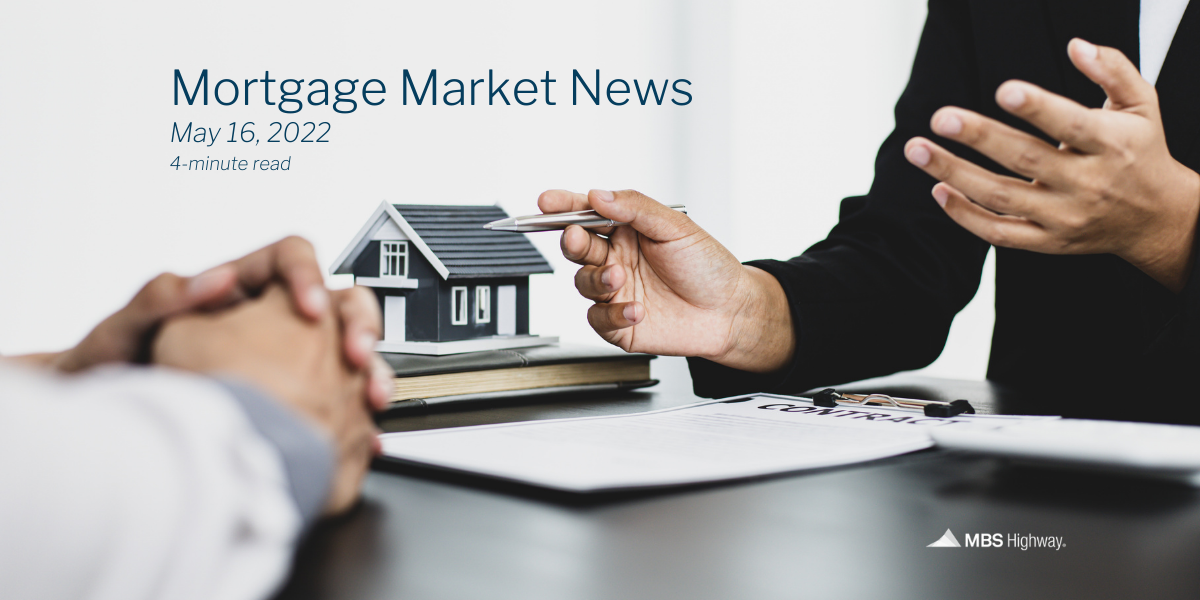 The Consumer Price Index (CPI), which measures inflation on the consumer level, rose 0.3% in April, just above the expected 0.2% gain. On an annual basis, CPI eased slightly from March’s reading of 8.5% (which was the hottest reading in 41 years) to 8.3%. While the year over year figure did decline, it was hotter than the 8.1% expected. Core CPI, which strips out volatile food and energy prices, rose by 0.6%, coming in hotter than the 0.4% gain expected. Year over year, Core CPI decreased from 6.5% to 6.2% but was higher than the 6% anticipated.

What’s the bottom line? Not only does inflation lead to higher costs of goods, but it is also the arch enemy of fixed investments like Mortgage Bonds because it erodes the buying power of a Bond’s fixed rate of return. If inflation is rising, investors demand a rate of return to combat the faster pace of erosion due to inflation, causing interest rates to rise as we’ve seen this year.

In addition, within the report, rents rose 0.6% in April and increased 4.8% on a year over year basis. While this data has started to increase, the CPI report is still not capturing the double digit increases year over year that many other rent reports are showing.

The Producer Price Index (PPI), which measures inflation on the wholesale level, rose 0.5% in April. On a year over year basis, PPI declined from 11.2% (which is the highest level on record since the methodology for collecting data was changed in 2010) to 11%. Core PPI, which also strips out food and energy prices, came in below expectations with a 0.4% increase in April. The year over year figure decreased from 9.6% to 8.8%. 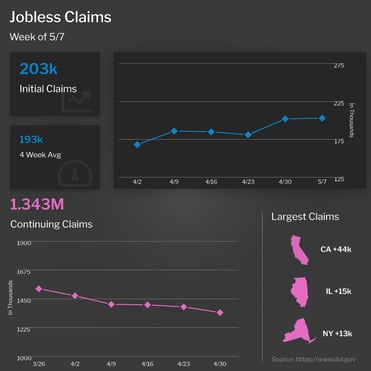 Initial Jobless Claims rose by 1,000 in the latest week, as the number of people filing for unemployment benefits for the first time was reported at 203,000. The previous week’s level was also revised higher by 2,000. Continuing Claims, which measure people who continue to receive benefits after their initial claim is filed, fell by 44,000 to 1.34 million. This is the lowest number of Continuing Claims since January 1970.

What’s the bottom line? Unemployment claims are extremely low and the labor market remains tight. But once we start to see claims pick up, especially initial claims, this could be a signal that the economy is slowing. Even though the latest increase in initial claims is minor, they have risen over the past two weeks. This is something we need to keep a close eye on as it’s an early indicator for the unemployment rate.

April’s National Federation of Independent Business Small Business Optimism Index was unchanged from March, with the index overall remaining at its weakest level in two years. Inflation remains an issue for small business owners, with 32% reporting it’s their biggest problem at present. Though companies that expect higher selling prices fell 2 points to 70%, this follows the highest reading in the survey’s history of 72% in March.

What’s the bottom line? Owners expecting better business conditions over the next six months fell 1 point to a -50%, which is the lowest level in the 48-year history of the survey. Given that we have experienced several recessions, a housing bubble and the COVID pandemic over the last 50 years, the fact that owners are feeling so negative right now could be yet another indicator that we may be headed for a recession.

Also of note, the Cass Freight Index, which is a monthly measure of the North American freight market, was down 2.6% month over month in April and down 0.5% year over year. It’s possible that this reading includes some indirect impact from Chinese lockdowns, but we’ll likely see more of the direct impact in upcoming readings. Freight volume is an extremely reliable early-recession indicator, so it’s important to closely monitor future reports.

Fresh off the heels of being confirmed as Fed Chair for a second term in a 4 to 1 vote, Jerome Powell said in an interview with Marketplace that he couldn’t promise a “soft landing.” This means he can’t promise that the Fed can slowdown or tighten the economy in their attempt to bring inflation under control while avoiding a recession.

Powell said, “So it will be challenging, it won’t be easy. … Nonetheless, we think there are pathways … for us to get there.”

This is a big shift in tone from previous statements he’s made. Originally, Powell indicated that there’s a good chance to achieve a soft landing. He also previously considered inflation “transitory.”

Low inventory, high demand and higher material costs continue to be the themes in the housing...