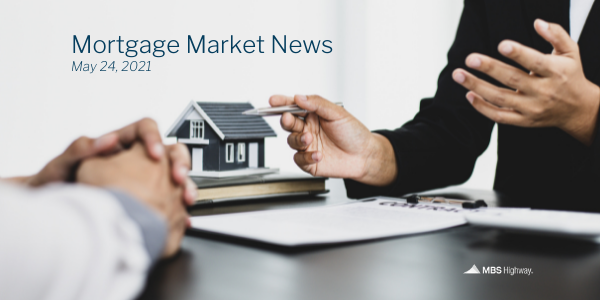 Housing news dominated the headlines, as the latest data on sales, construction and builder confidence was reported. Plus, the minutes from the Fed's latest meeting were released – and the markets responded! 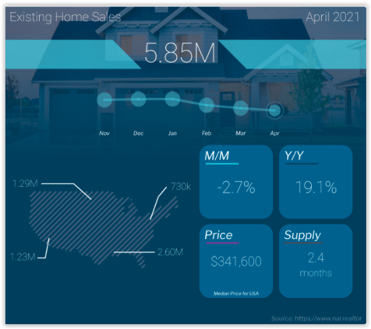 Existing Home Sales, which measure closings on existing homes, were down 2.7% in April. However, on an annual basis, sales are up 19% compared to April 2019 (a typical market) and 33% versus April of 2020 (when the pandemic and shutdowns were in full swing).

Inventory remains the biggest challenge for buyers, as there were just 1.16 million homes for sale at the end of April. This is down over 20.5% year over year, and reflects just a 2.4 months' supply, which remains near a record low. This low level of inventory helped homes sell quickly, as homes were only on the market for 17 days on average.

The median home price was $341,600, which is a record high and up 19% year over year. Note, this is not the same as appreciation. It simply means half the homes sold were above that price and half were below it. And sales on the low end were down, while homes between $750,000 and $1 million were up 146% and homes above $1 million were up 212%. This dragged the median home price higher.

First-time home buyers decreased from 32% to 31%, which is still a decent level considering the stiff competition for homes on the lower end and the lack of inventory. And of note, cash buyers increased from 23% to 25%. 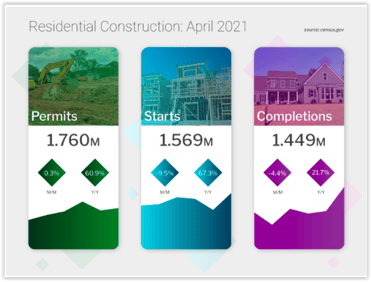 Housing Starts, which measure the start of construction on homes, were down 9.5% in April, which was much weaker than expectations. Even more urgently, single-family Starts, which are in such high demand around the country, fell 13%.

Building Permits, which are a good forward-looking indicator, were up 0.3% in April, while Permits for single-family homes were down 3.8%.

For both Housing Starts and Building Permits, we can throw out the year over year numbers due to the complete halt in construction this time last year.

Builders are delaying Housing Starts due to higher commodity prices like lumber. In fact, 15% of homebuilders are laying concrete and then not building houses. And while this counts as a Housing Start in terms of the reporting, we are not actually getting a house for much-needed supply. Unfortunately, this means the numbers are likely worse than we are seeing. In fact, Housing Completions were down 4.5%, which makes sense based on this information. Additionally, the lack of labor is a huge issue. 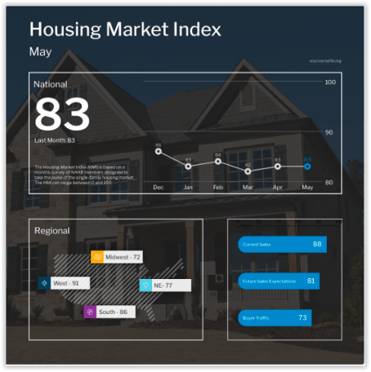 Builder confidence remained unchanged as May's reading matched the 83 that was reported in April, per the National Association of Home Builders Housing Market Index. Low inventory, low home loan rates and strong demand for housing are contributing to builders' positive sentiment. Any reading over 50 indicates that more builders view conditions as good rather than poor.

Of the three components of the index, current sales conditions was unchanged at 88, sales expectations for the next six months rose one point to 81, and buyer traffic ticked down one to 73.

NAHB Chief Economist Robert Dietz said, “Low interest rates are supporting housing affordability in a market where the cost of most materials is rising.” Yet he also cautioned that “home buyers should expect rising prices throughout 2021 as the cost of materials, land and labor continue to rise.” 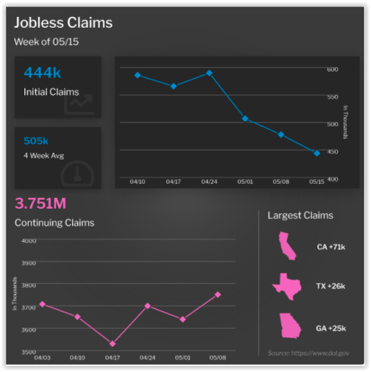 The number of people filing for unemployment for the first time decreased by 34,000 in the latest week, as 444,000 Initial Jobless Claims were filed. While it's nice to see this figure decline, it is still double the amount that was typical before the pandemic began. The previous week's Initial Jobless Claims was revised higher by 5,000 claims, from 473,000 to 478,000. California (+71K), Texas (+26K) and Georgia (+25K) reported the largest number of claims.

Pandemic Unemployment Assistance Claims (which provides benefits to people who would not usually qualify) and Pandemic Emergency Claims (which extends benefits after regular benefits expire) decreased by more than 829,000 combined claims.

All in all, 15.9 million people are still receiving benefits throughout all programs, which is down 887,000 from the previous week.

The minutes from the Fed's latest Federal Open Market Committee meeting were released on Wednesday and these always have the power to move the markets, especially if something mentioned may be seen as inflationary.

Last week, the minutes showed that a number of participants said that supply chain bottlenecks and input shortages may not be resolved quickly and, if so, these factors could put upward pressure on prices beyond this year.

In addition, the minutes also said that, “A number of participants suggested that if the economy continued to make rapid progress toward the Committee’s goals, it might be appropriate at some point in upcoming meetings to begin discussing a plan for adjusting the pace of asset purchases."

Also adding to volatility last Wednesday, the 20-Year Treasury Auction was met with below-average demand. The bid to cover of 2.24 was below the one-year average of 2.39. Direct and indirect bidders took 76.3% of the auction compared to 76.1% in the previous 12. Remember, weak demand can signal that investors think yields will continue to move higher, which can have a negative effect on rates.

The latest Existing and New Home Sales reports show that low supply continues to be the biggest...