News regarding new home sales, home appreciation and inflation all made headlines. But what does the data really mean? 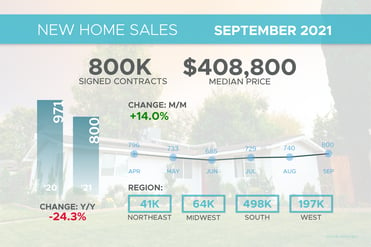 New Home Sales, which measure signed contracts on new homes, rose 14% from August to September at an 800,000 annualized pace. This was stronger than expectations and the highest reading since March. However, when factoring in the negative revisions to sales in August, sales in September were really up 8%, though this is still a strong improvement.

Looking at inventory levels, there were 379,000 homes for sale, which was unchanged from August’s report but up 32% from last year. However, there’s an important caveat to this data. Of the homes for sale, only 9% were actually completed, while the rest are either not started or under construction. This speaks to the backlog builders are experiencing and the continued tight supply of homes actually being delivered.

Also of note, Pending Home Sales, which measure signed contracts on existing homes, fell 2.3% in September after an 8% gain in August. Sales were also down 8% year over year, though this is not a bad annual reading considering the lack of inventory and tough comparisons to the market from last year. 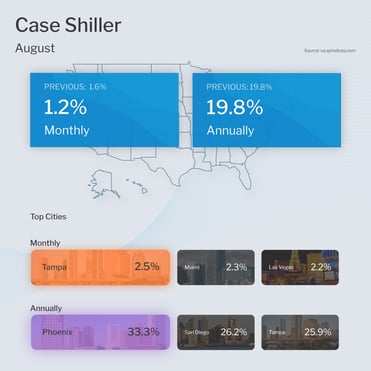 The Case-Shiller Home Price Index, which is considered the “gold standard” for appreciation, showed home prices rose 1.2% in August and 20% year over year. This annual reading was unchanged from the annual reading reported for July and marks the first time since early 2020 that we have not seen a year over year increase.

While home price appreciation is expected to continue, this data could suggest that the pace of appreciation may begin to slow. Note that this does not mean that home prices will drop. It simply means that they may rise at a more modest pace. 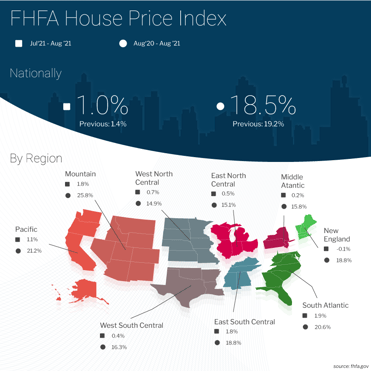 Home prices rose 1% in August and they were also up 18.5% year over year, which is down from 19.2%. This is the first time we saw prices moderate on an annual basis in quite some time.

Again, we are still seeing home prices rise, but at a slightly slower pace.

The Real Story Regarding Inflation

The Fed’s favorite measure of inflation, Personal Consumption Expenditures, showed that headline inflation rose 0.3% in September. Year over year, the index increased from 4.2% to 4.4%, which is the hottest reading in 30 years.

Core PCE, which strips out volatile food and energy prices and is the Fed’s real focus, was up 0.2% in September. The year over year reading remained at 3.6%.

This means if we continue to see monthly readings of 0.2%, we would see the year over year Core PCE reading climb by 0.4% to somewhere around 4%.

Rising inflation can cause home loan rates to move higher. Home loan rates are tied to a type of Bond called Mortgage Backed Securities and as inflation erodes a Bond's fixed return, the only way to compensate investors is with a higher rate. So, the possibility of rising inflation is always something we need to monitor.

It's also worth noting that PCE is a poor measure of inflation because it has a low weighting towards housing and out of pocket medical expenses, both of which are very important to consumers. Real inflation is likely higher than what is reflected in this latest report.

On a related note, Imitation Homes, which is the largest landlord in the US, reported that new rents are up 18% year to date, while renewals are up 8%. Again, the PCE and Consumer Price Index inflation reports do a poor job of capturing this, showing rents only up 2% on a year over year basis.

In addition, incomes were down 1% overall due to the expiration of the extra benefits and Covid unemployment plans. But private sector wages were up almost 1% last month and running at a 10% increase if you annualized this figure over the last six months. This speaks to the wage-pressured inflation we are seeing from most companies having to pay more to retain and hire people.

Initial Jobless Claims declined once again in the latest week, as the number of people filing for unemployment benefits for the first time fell 10,000 to 281,000. This is the lowest reading since before the pandemic.

Continuing Claims, which measure people continuing to receive benefits, also reached a pandemic-era low as they declined by 237,000 to 2.2 million.

The federal COVID plans, including the Pandemic Unemployment Assistance and Emergency Claims, fell by 335,000 as those plans continue to expire. Extended Benefits also dropped by 17,000.

There are now 2.8 million people in total receiving benefits, which is down by almost 450,000 from the previous week. The jobless claims picture continues to make significant improvements, despite the fact that many job openings remain.

The first look at Gross Domestic Product (GDP) for the third quarter showed annualized growth of 2%, which was below the estimate of 2.6% but better than the 0.5% estimate from the Atlanta Fed. Real final sales fell 0.1%, which means that most of the gain came from inventory build and this added 2% to GDP. Personal spending was up 1.6%, driven by spending on services, as goods spending fell. Remember that GDP was 6.7% annualized in the second quarter so this third quarter reading reflects a big revision lower on full year GDP.