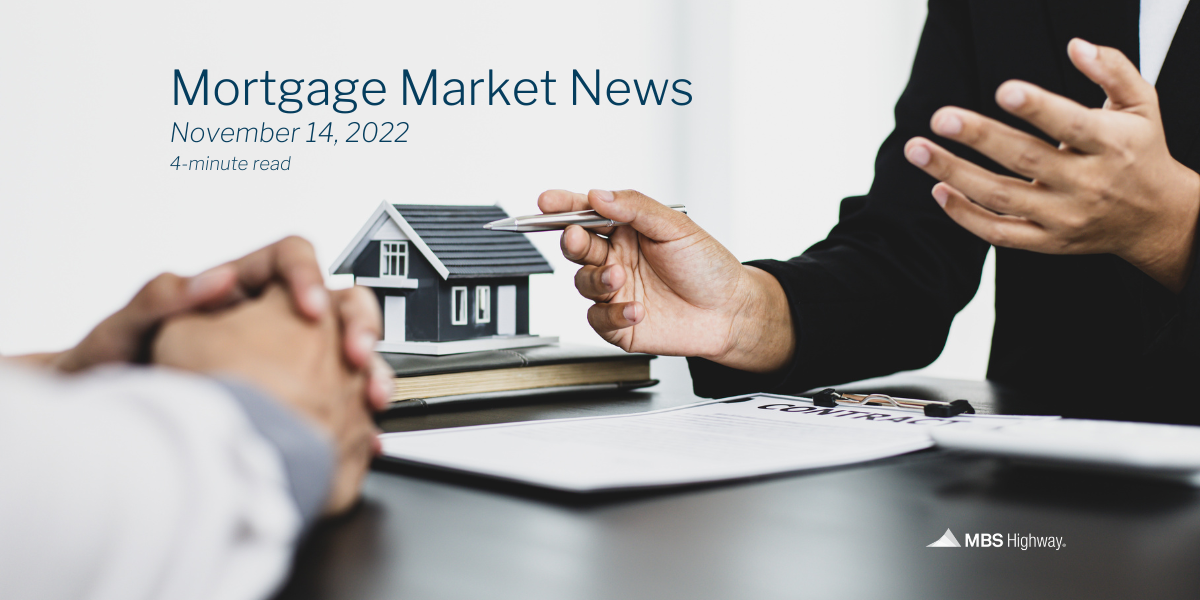 October brought cooler than expected consumer inflation, which gave a big boost to both Stocks and Bonds when the data was reported on Thursday. Meanwhile Jobless Claims continue to tick higher. Read on for these key headlines and more.

The Consumer Price Index (CPI), which measures inflation on the consumer level, showed that inflation increased by 0.4% in October, coming in lower than estimates. On an annual basis, inflation declined from 8.2% to 7.7%, which was much cooler than the 8% expected.

The real story here was Core CPI, which strips out volatile food and energy prices. It also came in softer than forecasted with a 0.3% rise. As a result, year-over-year Core CPI decreased from 6.6% to 6.3%, which was also much lower than estimates. The tame inflation data helped both Stocks and Bonds move sharply higher on Thursday.

While prices fell for medical care services, used cars and apparel, shelter costs saw their largest monthly increase in the history of the index. Shelter costs make up 39% of Core CPI, so they played a big role in the monthly gain. However, they have been lagging in the CPI report.

Real shelter costs have been moderating in the current market. For example, Zumper’s National Rent Report showed that the national median rent for one bedrooms fell 0.8% while two bedrooms saw a 0.7% decline from September to October. In addition, after 12 consecutive months of double-digit annual increases, the national median rent rose by just 9.2% when compared to October of last year. These moderating shelter costs should be reflected in the CPI data hopefully by January, which should add additional downside pressure to inflation.

What’s the bottom line? Besides causing higher prices, inflation is the arch enemy of fixed investments like Mortgage Bonds because it erodes the buying power of a Bond's fixed rate of return. If inflation is rising, investors demand a rate of return to combat the faster pace of erosion due to inflation, causing interest rates to rise as we’ve seen this year.

However, when we look at how inflation is calculated, there is hope that it may continue to move lower in the months ahead.

Going forward, the inflation readings that will be replaced are much higher, so if we see lower monthly readings like we did in October’s report, the annual rate of inflation will continue to move lower. Again, lower inflation typically helps both Mortgage Bonds and mortgage rates improve.

The National Federation of Independent Business (NFIB) Small Business Optimism Index was reported at 91.3 for October, down from 92.1 in September. This is the tenth straight month the index has come in below the 49-year average of 98. Among the key takeaways, 33% of small business owners reported that inflation remained their biggest problem, so evidence of cooling inflation is certainly a welcome sign.

What’s the bottom line? Bill Dunkelberg, NFIB’s chief economist, noted that, “Owners continue to show a dismal view about future sales growth and business conditions, but are still looking to hire new workers.” He added, “Inflation, supply chain disruptions, and labor shortages continue to limit the ability of many small businesses to meet the demand for their products and services.” 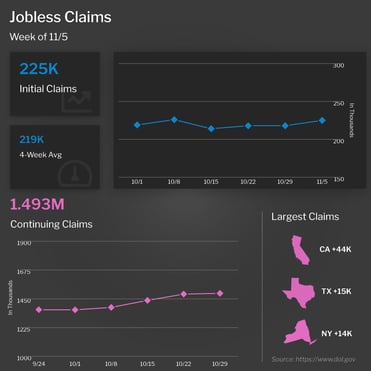 The number of people filing for unemployment benefits for the first time rose by 7,000 in the latest week, as 225,000 Initial Jobless Claims were reported. Continuing Claims, which measure people who continue to receive benefits after their initial claim is filed, rose 6,000 to 1.493 million.

What’s the bottom line? Continuing Claims rose by 129,000 throughout October, which suggests it’s becoming harder for people to find a job once they’re let go. In addition, while Initial Jobless Claims remain low, they still reflect an additional 225,000 people filing for unemployment. With headlines of large companies issuing layoffs, it’s possible Continuing Claims could continue to rise and the labor market may not be as strong as reports have indicated.

The Scoop on Key Auctions

While Wednesday’s 10-year Note auction was met with weak demand, Thursday’s 30-year Bond auction at 1:00 p.m. ET was met with strong demand, the latter of which helped Bonds build on the boost they received from the tame CPI data released Thursday morning.

Both producer and consumer inflation were cooler than estimates last month, while Initial Jobless...