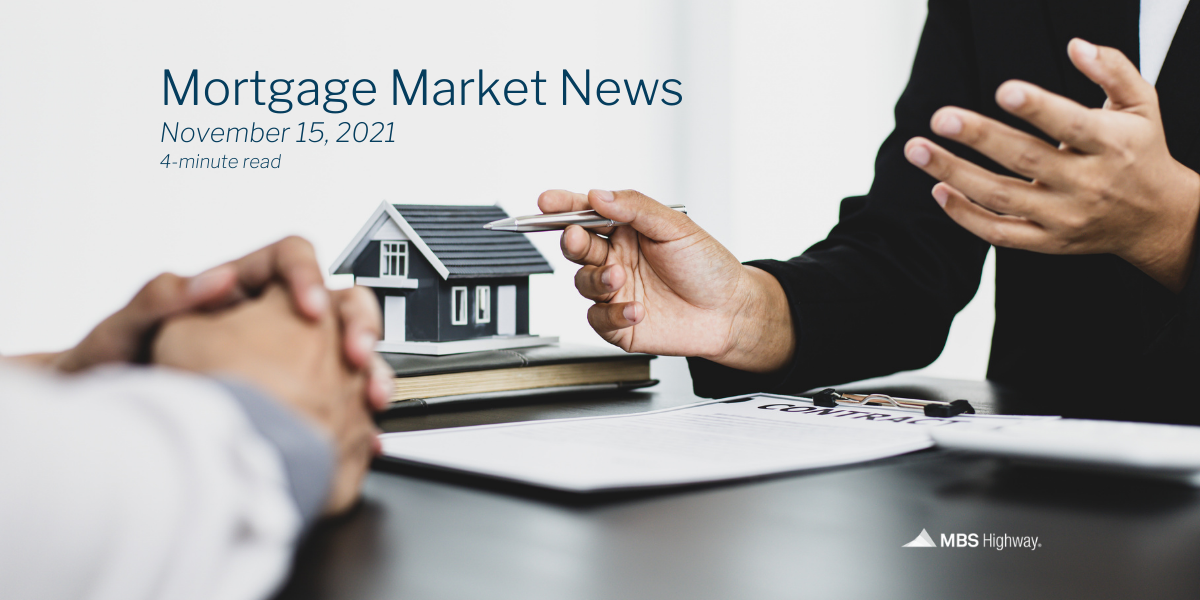 Fall has ushered in cooler temperatures and hotter inflation, which is having an impact on households around the country and confidence among small business owners.

The Consumer Price Index (CPI), which measures inflation on the consumer level, rose by 0.9% in October, which was much higher than expectations of 0.6%. The year over year reading increased from 5.4% to 6.2%.

Core CPI, which strips out volatile food and energy prices, rose by 0.6%, which was also much higher than expectations. On a year over year basis, Core CPI jumped from 4% to 4.6%.

Within the report, rents rose 0.4% in October and 2.7% on a year over year basis, up from 2.4% in September. However, the CPI report is still not capturing the increases we are seeing in many other rent reports that are showing double digit increases year over year. We may see some catch up in this CPI data in future months but for now the reporting continues to be dragged down by their methodology.

Also of note, owners’ equivalent rent has increased to 3.1% year over year.

Inflation is critical to monitor because rising inflation reduces a Bond’s fixed rate of return. In other words, inflation can cause Mortgage Bonds to worsen or lose value and the home loan rates tied to them to rise. The high headline CPI reading certainly caused a reaction in the Bond markets for the worse when the data was released on Wednesday.

After its Federal Open Market Committee meeting earlier this month, the Fed said that inflation was elevated but “reflecting factors that are expected to be transitory. Supply and demand imbalances related to the pandemic and the reopening of the economy have contributed to sizable price increases in some sectors.”

In essence, the Fed is hoping that supply chain bottlenecks ease, which will cause inflation to move lower. Though many factors influence the markets, monitoring inflation data in the months ahead remains crucial, especially as households around the country have been feeling the pressure of higher prices.

On a related note, confidence among small business owners fell to the lowest level since February, as the National Federation of Independent Business Small Business Optimism Index dropped to 98.2 in October. Particularly noteworthy was that those expecting higher selling prices jumped 7 points to 53%, which is the highest in the 40-year history of this survey. This reading reflects a growing belief among those surveyed that the rise we’ve seen in inflation is not temporary, especially as supply chain issues persist.

The Producer Price Index, which measures inflation on the wholesale level, rose 0.6% in October and 8.6% on a year over year basis. The annual reading was unchanged from September, matching the highest level on record.

Core PPI, which again strips out volatile food and energy prices, rose 0.4% in October and 6.8% on a year over year basis. This annual reading was also unchanged from September and is still extremely elevated.

Wholesale inflation continues to remain hot, which can lead to hotter consumer inflation levels if producers pass those higher costs along to consumers.

The number of people filing for unemployment benefits for the first time continues to decline, as Initial Jobless Claims fell 4,000 to 267,000, reaching the lowest reading since before the pandemic began.

Continuing Claims, which measures individuals who continue to receive benefits, did increase by 59,000 to 2.16 million.

There are now 2.57 million people in total receiving benefits, which is down 107,000 from the previous week.

Despite the challenges in hiring workers that many businesses are facing, the jobless claims picture continues to improve, with the numbers starting to resemble the levels we saw prior to the pandemic.

Tuesday’s 10-Year Treasury Note Auction was met with below average demand. The bid to cover of 2.35 was below the one-year average of 2.46. Direct and indirect bidders took 84.8% of the auction compared to 80.6% in the previous 12.

Wednesday’s 30-Year Bond Auction was also met with weak demand. The bid to cover of 2.20 was below the one-year average of 2.33. Direct and indirect bidders took 74.8% of the auction compared to 82% in the previous 12. Part of the reason for the weak Bond auction is the higher inflation readings we have seen, which leads investors to believe rates will be higher in the future. And if that is the case, they don’t want to tie up their money for 30 years at the current yields.

The weather isn't the only thing warming this spring, as home construction and consumer inflation...