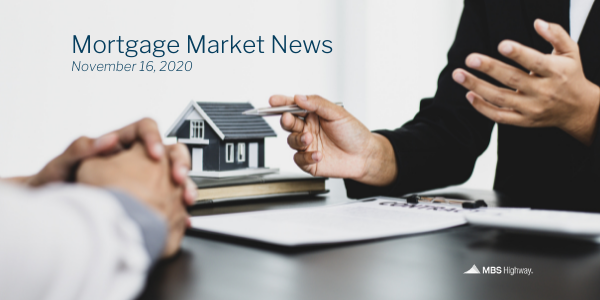 The economic calendar was relatively quiet, but news on inflation and the latest jobless claims figures made headlines at the end of the week. 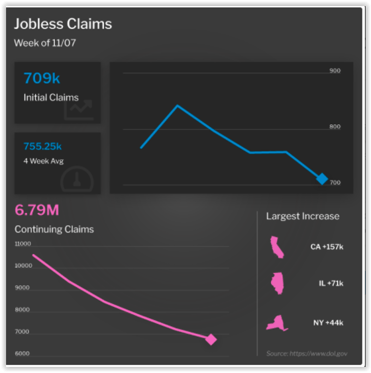 Another 709,000 people filed for unemployment benefits for the first time during the week ending November 7, which is a decline from the previous week. California (+157K), Illinois (+71K) and New York (+44K) reported the largest increases.

The number of people continuing to receive benefits also improved, as that figure dropped to 6.8 million in the latest week.

While both of these figures have been moving in the right direction over the past few weeks, it's important to remember that when regular benefits expire, people can file for Pandemic Emergency Unemployment Compensation (PEUC), which extends their benefits for another 13 weeks. That figure increased by 160,000 people, so while the drop in continuing claims is a great sign, it does need to be taken in context.

Consumer inflation was tamer than expected in October, as the Consumer Price Index (CPI) was flat for last month. On an annual basis, CPI decreased from 1.4% to 1.2%. Core CPI, which strips out volatile food and energy prices, was also flat in October while the year-over-year reading fell from 1.7% to 1.6%.

Of particular note, rents are rising 2.7% across the US, which is stable from the previous month.

Most likely, the spike in COVID cases in October caused consumers to be fearful, which led to inflation cooling a bit. Inflation had been up 1.5% over the previous five reports.

At the wholesale level, the Producer Price Index (PPI) showed that headline inflation did increase by 0.3%, which was higher than market expectations of 0.2%. On a year over year basis, headline PPI increased from 0.4% to 0.5%, but still remains very tame. Core PPI, which again strips out food and energy prices, was up 0.1% for the month, but decreased from 1.2% to 1.1% annually. As with the Core CPI reading, we are not seeing much in the way of Core inflation in October, likely due to the increase in COVID cases.

Why is tame inflation significant?

Inflation is the arch enemy of fixed investments like Mortgage Bonds because it reduces their value. Home loan rates are inversely tied to Mortgage Bonds. When inflation rises, it can cause Bonds to worsen or move lower, which means home loan rates can rise. Though many factors impact the markets, it's always important to keep an eye on inflation headlines.

A Note on Home Prices

When the media talks about rising home prices, it's important to note which data they reference, as the median home price is the wrong metric to look at. Here's why.

The median home price simply measures the middle-priced home that sold in a given timeframe, meaning that half the homes sold above that number and half below that number.

For example, the median home price for Existing Home Sales in September was reported at $311,800, up almost 15% year over year. But this doesn't mean homes are not affordable. It means the middle-priced home that sold was $311,800, with half the homes selling below and half above that price. In September, inventory remained tightest among lower-priced homes, which is why not as many were sold. As a result, a greater number of higher-priced homes sold and the median home price moved higher.

The real metric to look at is appreciation, which is growing at a pace of 5.5% to 6% year over year.

Also in the News

The National Federation of Independent Business Small Business Optimism Index remained unchanged in October at 104 and is among the highest in the survey's history. However, as COVID cases rise and things potentially shut down again, this optimism may wane in the months to come. Of particular note, those who expect higher selling prices rose for the fifth month by 2 points to match the highest level since July 2019, which speaks to potential inflation.