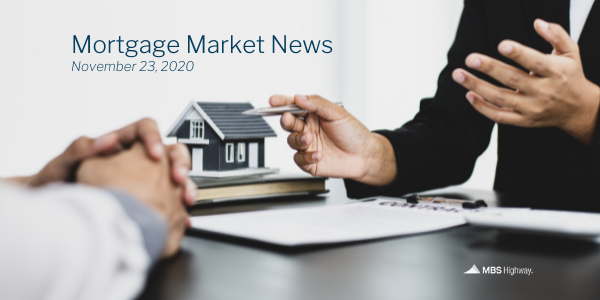 The housing sector remains the backbone of our economic recovery, as the demand for homes has helped builder confidence reach another record high. However, low inventory still remains a challenge, as does the pandemic's impact on unemployment.

Another 742,000 people filed for unemployment benefits for the first time during the week ending November 14, which was an increase of 31,000 people from the prior week's revised report. California (+158K), Illinois (+46K) and New York (+43K) reported the largest increase.

Continuing Claims, which measure people continuing to receive benefits, improved by 430,000 to 6.4 million. While this number has been declining in recent weeks, it's important to note that people can file for Pandemic Emergency Unemployment Compensation (PEUC) when their regular benefits expire. PEUC extends benefits for another 13 weeks.

The number of PEUC claims increased by 233,000, so while the drop in Continuing Claims is positive, it does need to be taken in context. In addition, we don’t know if the decrease in Continuing Claims is reflective of people who are going back to work or people whose benefits are just expiring. And unfortunately, with the recent shutdown announcements from many states, the jobless claims picture may start to get worse. 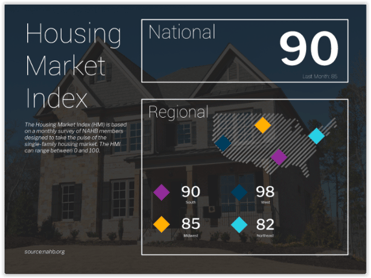 The NAHB Housing Market Index rose 5 points to 90 in November, setting a record high for the third month in a row. All three components of the index increased, with current sales conditions rising 6 points to 96, sales expectations for the next six months up 1 point to 89, and buyer traffic notching 3 points higher to 77. Any reading above 50 indicates expansion, and given that the index runs from 1-100, confidence among builders can't get much higher. 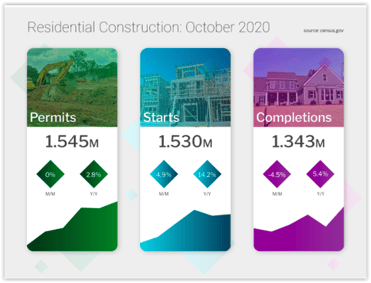 Meanwhile, October Housing Starts (which measure the start of construction on homes) were up 4.9% from September, coming in stronger than expectations. They were also 14.2% higher than October of last year. All of the gain was among starts for single-family homes, which is the area crucial for supply, as single-family starts were up 6.4% from September to October and a whopping 29.4% compared to October of last year. Single-family starts are at their highest level in 13.5 years.

Building Permits, which are a good future indicator of Starts, were flat from September to October, but they did rise 2.8% year over year. Single-family permits were up 0.6% from September.

The bottom line is that the increase in single-family starts and permits will help to meet some of the demand among homebuyers. However, there is so much more demand than supply right now and this imbalance will continue to support home prices.

Existing Home Sales, which measures closings on existing homes, were up 4.3% in October, which was well above expectations of a 1.2% decline and the fifth consecutive month of gains. Sales were also nearly 27% higher than October of last year, and the level of sales is near the all-time high set in 2006 when there were twice as many homes for sale.

Speaking of inventory, challenges remain on the supply front as inventory is down nearly 20% from last October with a record low 2.5 months' supply. By comparison, a 6 months' supply is considered reflective of a healthy housing market. In addition, homes were only on the market for 21 days on average, with 72% of homes selling in October in under 30 days.

The median home price was reported at $313,000, which is another record and up 15.5% year over year. Note that this doesn't mean homes are not affordable. It just means the middle-priced home that sold was $313,000, with half the homes selling below and half above that price. In October, a greater number of higher-priced homes sold (including twice as many million-dollar homes selling compared to last year), and as a result, the median home price moved higher.

Despite the strong competition for lower-priced homes, first-time buyers made up 32% of sales, a tick up from the 31% reported in September.

NAR chief economist Lawrence Yun noted, "Considering that we remain in a period of stubbornly high unemployment relative to pre-pandemic levels, the housing sector has performed remarkably well this year."

A Note on Retail Sales

Retail Sales will be important to monitor in the coming months, as sales were less than expected in October, rising just 0.3% from September's downwardly revised rate. While the initial stimulus package and additional unemployment benefits certainly helped people earlier this year, we may see a continued pull back in spending if we don't have another stimulus deal and as unemployment benefits expire. In addition, ongoing shutdowns may also affect sales as several states, including California, Washington, Michigan and Oregon, have implemented stiffer rules.

The spike in COVID cases continues to impact businesses and employees around the country, as...