A smorgasbord of news was released ahead of Thanksgiving, including an update on new home sales, jobless claims, the Fed and recession chatter. Read on for these stories: 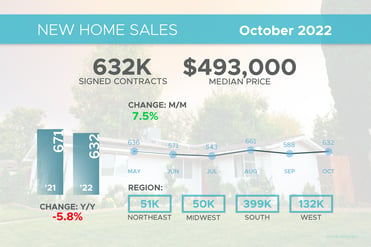 New Home Sales, which measure signed contracts on new homes, rose 7.5% in October to a 632,000-unit annualized pace, coming in much better than the 5.5% decline that was expected. There was a negative revision to September’s sales that made October’s gain appear a bit bigger, but even when factoring this in sales were up 5.5%.

The median home price for new homes was $493,000, which was an increase from September, but remember this is not the same as appreciation. It simply means half the homes sold were above that price and half were below it, and this figure can be skewed by the mix of sales. Last month, there was a big uptick in sales of homes in the $500,000 and over segments.

What’s the bottom line? These sales figures were from October when rates were half a percent higher, so contract signings may continue to pick up. And while sales are now down 5.8% from October of last year, this year’s figure is not so bad considering higher rates, inflation and tight inventory.

Speaking of inventory, there were 470,000 new homes for sale at the end of October, which equates to an 8.9 months’ supply. However, only 61,000 or 13% were actually completed, with the rest either not started or under construction. The amount of completed homes equates to a 1.2 months’ supply, well below a balanced market.

The number of people filing for unemployment benefits for the first time rose by 17,000 in the latest week, as 240,000 Initial Jobless Claims were reported. Continuing Claims, which measure people who continue to receive benefits after their initial claim is filed, also saw a substantial jump of 48,000 to 1.551 million.

What’s the bottom line? The latest week’s Initial Jobless Claims was the largest amount since August and also a sizeable increase from the previous week, which likely reflects some of the large layoffs that have been reported in the news. Continuing Claims have also risen by 187,000 since the beginning of October and this suggests that it’s becoming harder for people to find a job once they’re let go. The continued increase in unemployment claims may mean the labor market is not as strong as reports have indicated and could signal that a rise in the unemployment rate is ahead.

Will the Fed Slow Its Pace of Rate Hikes?

The minutes from the Fed’s November meeting showed that Fed members feel ongoing hikes to their benchmark Fed Funds Rate would be appropriate but a substantial majority support slowing the pace of hikes soon. This sets up a potential 50 basis point hike at their meeting on December 13-14, which would mark their seventh rate hike of the year, including four consecutive aggressive 75 basis point hikes at their meetings in June, July, September and November.

The Fed Funds Rate is the interest rate for overnight borrowing for banks and it is not the same as mortgage rates. When the Fed hikes the Fed Funds Rate, they are trying to slow the economy and curb inflation. The minutes also showed that many Fed members said that the effects of the rate hikes were still quite uncertain. But of note, the Consumer and Producer Price Indexes released after the Fed’s meeting showed that inflation was cooler than expected in October.

Recent news stories have questioned whether the United States will hit a recession, pointing to strong Retail Sales data for October which showed that consumers remained resilient and continued to spend despite inflation. Retail Sales were up 1.3% last month, which was stronger than estimates of 1%.

What’s the bottom line? The strength in Retail Sales may be more of an illusion, as additional data suggests some consumers are using credit cards and their savings for some of this spending. Credit card debt has risen 15% over the last year, which is the largest jump since the 2001 recession, while the nation’s savings rate has dropped to 3%, well below the pre-pandemic level of 7.8% in January 2020 and the lowest level since the 2008 to 2009 recession.

Recently, yields on the longest maturity Bond (the 30-year) and the shortest maturity Treasury (the 1-month) inverted. The last two times this happened, a recession followed shortly thereafter. In addition, we have seen other inversions in recent months, including 1-year and 2-year yields moving higher than 10-year yields. An inverted yield curve has been a historically accurate recession indicator, as it is a symptom that the economy is slowing.

The last week of July was jam-packed with news, including a Fed rate hike, hot inflation numbers,...