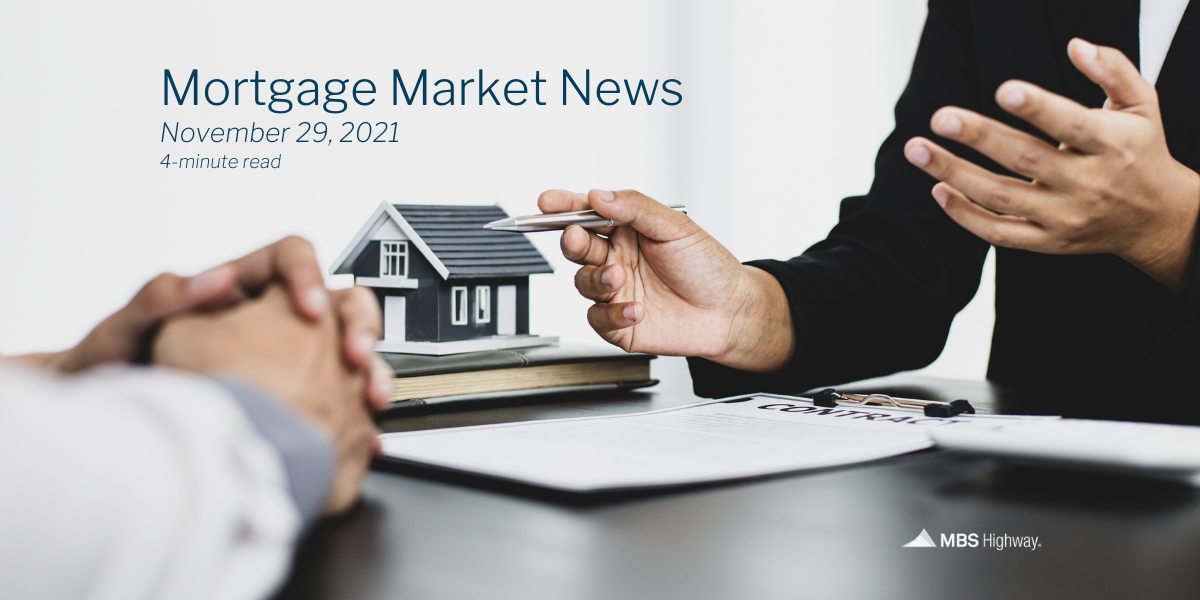 A full serving of news on inflation, housing and the economy was reported ahead of Thanksgiving, with plenty of headlines for the markets to feast on.

The Fed’s favorite measure of inflation, Personal Consumption Expenditures, showed that headline inflation rose 0.6% in October. Year over year, the index increased from 4.4% to 5%, which is the hottest reading in over 30 years.

Core PCE, which strips out volatile food and energy prices and is the Fed’s real focus, was up 0.4% in October. The year over year reading increased from 3.7% to 4.1%.

When we look ahead to the next report, which will be released on December 23 with data for November, we will be replacing another reading of 0% for Core PCE from November 2020. This means we may continue to see the PCE climb sharply.

It's also worth noting that the PCE is a poor measure of inflation because it has a low weighting towards housing and out of pocket medical expenses, both of which are very important to consumers. Real inflation is likely higher than what is reflected in this latest report.

Also of note, private sector wages are up 11% year over year, which speaks to the wage pressured inflation we are seeing from companies that are having to pay more to retain and hire workers. 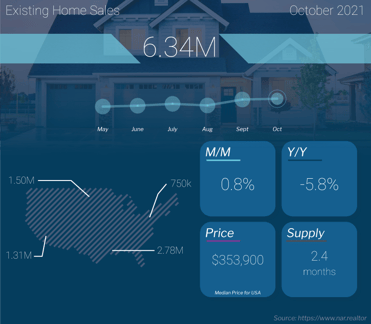 Existing Home Sales, which measure closings on existing homes, inched up nearly 1% from September to October to an annual pace of 6.34 million units. This follows a large jump in sales in September. However, on an annual basis, sales are nearly 6% lower than they were in October of last year.

The lack of homes for sale continues to remain a challenge around the country, as inventory declined almost 1% to 1.25 million homes for sale at the end of October. This represents just a 2.4 months’ supply of homes at the current sales pace. Inventory is also 12% lower when compared to October of last year.

First-time home buyers have accounted for 29% of sales, which is up from 28% in September. Cash buyers increased to 24% from 23%, while investors purchased 17% of homes, which was up sharply from 13% in September. 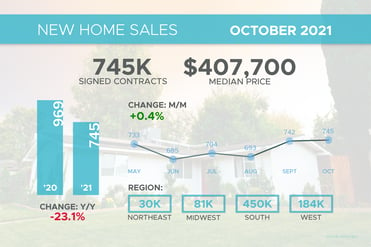 New Home Sales, which measure signed contracts on new homes, were up 0.4% in October at a 745,000 annualized pace. However, this headline number does not tell the whole story.

Sales in September were revised lower from 800,000 to 742,000. When factoring in this revision, New Home Sales are really down 6.8% from the originally reported number in September. But there was a big surge in sales in September from August (where there were 693,000 homes sold at an annualized pace). So, even though sales in October were just modestly higher than they were in September, they were up 7.5% from August.

Year over year, sales were down 23.1% but from 2019 they are up 6%. The year over year comparisons to 2020 are tough because of the abnormalities in the market during the pandemic last year.

The median home price came in at $407,700. Again, this is not the same as appreciation. It simply means half the homes sold were above that price and half were below it. 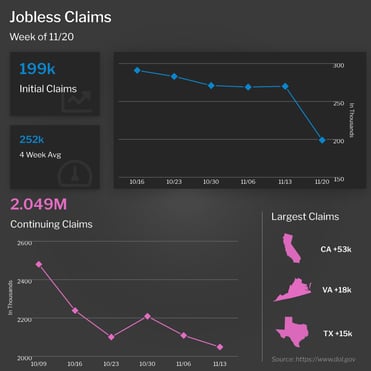 The number of people filing for unemployment benefits for the first time fell by 71,000 to 199,000 in the latest week.

Not only is this a pandemic-era low, it’s also the lowest level since November 1969.

There are now 2.4 million people in total receiving benefits, which is down 752,000 from the previous week and more reflective of numbers prior to the pandemic.

With oil prices at seven-year highs, President Biden announced that the Department of Energy will release 50 million barrels of oil from the Strategic Petroleum Reserve in an attempt to push oil prices lower. This was a coordinated effort with other countries, and we should see the impact on oil prices over the coming months.

President Biden also confirmed that Jerome Powell will be re-nominated as Chair of the Federal Reserve for another term.

Lastly, the second reading of Gross Domestic Product (GDP) for the third quarter showed a slight revision higher from 2% to 2.1%, though this is still pretty anemic considering all of the stimulus.