It was a busy start to the week, as a cornucopia of housing, unemployment and economic news was reported ahead of the Thanksgiving holiday. 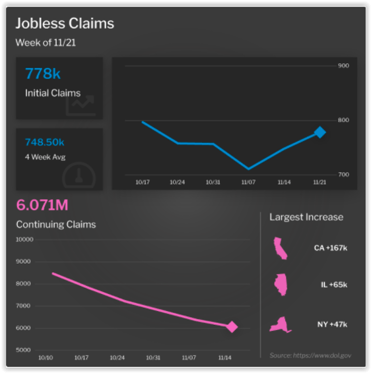 Another 778,000 people filed for unemployment benefits for the first time during the week ending November 21. This was an increase of 30,000 people from the previous week and a five-week high. New claims have increased over the past several weeks, likely due to the spike in COVID cases. California (+167K), Illinois (+65K) and New York (+47K) reported the largest increases.

Continuing Claims, which are filed by people who continue to receive benefits, did improve by 300,000 to 6.071 million. While this number has been improving in the past few weeks, it's important to remember that when regular benefits expire, recipients can file for Pandemic Emergency Unemployment Compensation (PEUC), which extends their benefits another 13 weeks.

The number of PEUC claims increased by 132,000, so the drop in Continuing Claims is not as good as the headline would lead us to believe. Plus, the larger story here is that many people are reaching the point where their regular benefits are due to expire. As such, we will likely see the number of Continuing Claims continue to improve, but this doesn’t really mean the employment picture is getting better, unfortunately. 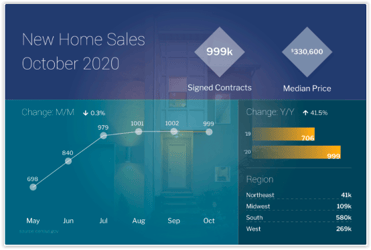 New Home Sales, which measures signed contracts on new homes, were down 0.3% and essentially flat from September to October. But that doesn’t tell the whole story.

September's sales figure was revised 4.5% higher and sales in October neared 1 million units. In addition, sales are up a whopping 41.5% compared to October of last year – even with the big drop in inventory, which is down 13.4% year over year! Low inventory remains a challenge, with just a 3.3 months' supply of new homes available for sale at the end of October. Typically, 6 months of supply is considered a healthy housing market.

The median home price increased to $330,600, up 2.5% year over year. Remember this is not the same as appreciation, which is near 7% as noted per the latest Case-Shiller data below. The median home price simply means half of the homes sold were above and half were below that price. 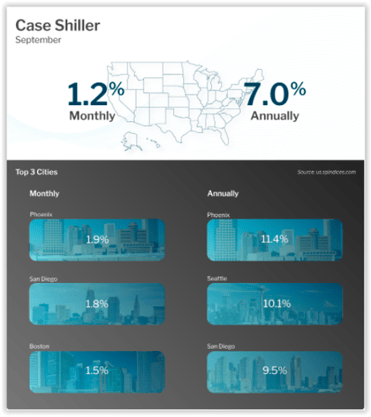 The Case-Shiller Home Price Index, which is considered the “gold standard” for appreciation, showed that there was a 7% annual gain in home prices in September nationwide, up from an already strong reading of 5.8% in August. The 20-city Index rose from 5.3% to 6.6% when compared to September of last year, with all of the cities showing strong gains. Phoenix (+11.4%), Seattle (+10.1%) and San Diego (+9.5%) reported the highest annual gains among the 20 cities.

The 7% national reading for appreciation means there is a huge opportunity in homeownership. For example, buying a $300,000 home that gains 7% in appreciation would mean a benefit of just over $21,000 in just one year on appreciation alone. The equity gain with amortization would be even greater. 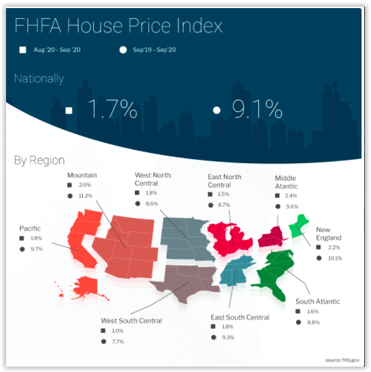 There was also news from the Federal Housing Finance Agency (FHFA) regarding home price appreciation on single-family homes with conforming loan amounts. Their House Price Index showed that home prices rose 1.7% from August to September and are up 9.0% year over year, even higher than the 8% reading in the previous report. Note that while, for example, you can have a million-dollar home with a conforming loan amount, the report typically represents lower-priced homes, where supply is tightest and demand is strongest. This is why the FHFA report shows even stronger annual appreciation than the Case-Shiller report.

Will the appreciation trend continue?

While single-family home construction is rising slowly, it is not even close to meeting the demand, especially in the lower-priced tiers. In addition, single-family building permits, which are an indicator of future construction, were basically flat in October, suggesting construction is not going to rise significantly in the winter months. This should exacerbate an already tight supply issue, with record low levels of inventory.

In addition, demand should continue to rise due to demographics as, based on birthrates, we should see an increasing number of first-time home buyers enter the market over the next several years.

Personal Consumption Expenditures, the Fed's favored inflation measure, showed that headline inflation was flat in October and fell from 1.4% to 1.2% year over year. The Core rate, which strips out volatile food and energy prices and is the Fed's real focus, was also flat in October while decreasing from 1.5% to 1.4% compared to October of last year.

Why does tame inflation matter?

A Note on GDP

The second estimate of third quarter Gross Domestic Product (GDP) remained flat at 33.1% on an annualized basis, which was in line with expectations. One important thing to note, however, is that the 33.1% gain in the third quarter does not erase the -31.4% drop in the second quarter. GDP would have to increase almost 46% to make back what was lost. And on a related note, the minutes from the Fed's November 4-5 meeting showed that the Fed identified downside risks in the lack of fiscal stimulus and a resurgence of COVID, both of which could negatively impact GDP in the fourth quarter.

The last week of July was jam-packed with news, including a Fed rate hike, hot inflation numbers,...