There was mixed news from the labor sector in September while home prices remained red hot in August.

Job Creations Much Lower Than Expected

The Bureau of Labor Statistics (BLS) reported that there were 194,000 jobs created in September, which was much weaker than the 500,000 new jobs that were expected. However, there were positive revisions to the data for July and August adding 169,000 new jobs created in those months combined, which makes the miss in September look slightly better.

The private sector showed some good gains of 317,000 jobs, but government jobs fell by 123,000. In addition, leisure and hospitality only showed 73,000 job gains, which was disappointing and a mismatch from the ADP Employment Report that is highlighted below.

It’s important to understand that there are two reports within the Jobs Report and there is a fundamental difference between them. The Business Survey is where the headline job number comes from and it's based predominately on modeling.

The Household Survey, where the Unemployment Rate comes from, is done by actual phone calls to 60,000 homes. The Household Survey also has a job loss or creation component, and it showed there were 526,000 job creations, while the labor force decreased by 183,000. The number of unemployed people decreased by 710,000, causing the Unemployment Rate to fall from 5.2% to 4.8%

Note that there has been a lingering misclassification error where people were classified absent from work for other reasons and not marked as unemployed on temporary layoff when they should have been. When we factor this into the calculations, the Unemployment Rate should have been around 0.1% higher at 4.9%.

In addition, there are 6 million people who have not looked for work in the last four weeks who are also not counted in the labor force or counted as unemployed, which is an increase from 5.7 million people in the previous report. It’s likely we will see this trend change in October’s report, given that the federal pandemic benefits expired on Labor Day and people will have had more time to look for work by the time that data is collected.

Wage growth is running at a 6% yearly increase pace over the last six months. Leisure and hospitality earnings are almost 11% higher year over year, but it appears this is still not enough to attract the workers we need in that sector. 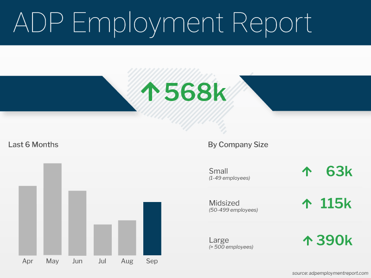 The ADP Employment Report, which measures private sector payrolls, showed that there were 568,000 jobs created in September, which was much stronger than expectations of 428,000 new jobs. The data for August was revised lower by 34,000 to 340,000 jobs, but this was still a strong report.

Both the goods-producing and service-providing sectors showed gains, with services contributing the majority share at 466,000 jobs. Leisure and hospitality led the way with 226,000 job gains. And of note, construction added 46,000 jobs.

The number of people filing for unemployment benefits for the first time fell by 38,000 in the latest week, as 326,000 Initial Jobless Claims were reported.

But the real headliner is that the federal COVID plans, including the Pandemic Unemployment Assistance and Emergency Claims, fell by 773,000 as those plans expired.

There are now 4.2 million people in total receiving benefits, which is down from 5 million in the previous report.

CoreLogic released their Home Price Index report for August, showing that home prices rose by 1.3% from July and 18.1% year over year, which is a notch higher than the 18% annual gain reported in July.

CoreLogic forecasts that home prices will rise 0.3% in September and 2.2% in the year going forward (which is below their previous annual forecast of 2.7%). They remain conservative in their forecasting and continue to miss on the low side. For example, CoreLogic had forecasted prices for August would rise by 0.7% and prices ended up increasing 1.3%.

However, Frank Martell, the President and CEO of CoreLogic, did state that he thinks the trend of strong price gains will continue indefinitely with large amounts of capital chasing too few assets.

While monthly appreciation gains are still expected to occur, they could start to slow and this would make the year over year figures start to even out or come down a bit, like the annual figure reported for August. Note this does not mean home prices are expected to decline because there is still too big of a crop of homebuyers for too few homes. But the pace of gains could slow.