The Latest on Inflation, Employment and the Fed’s Tapering 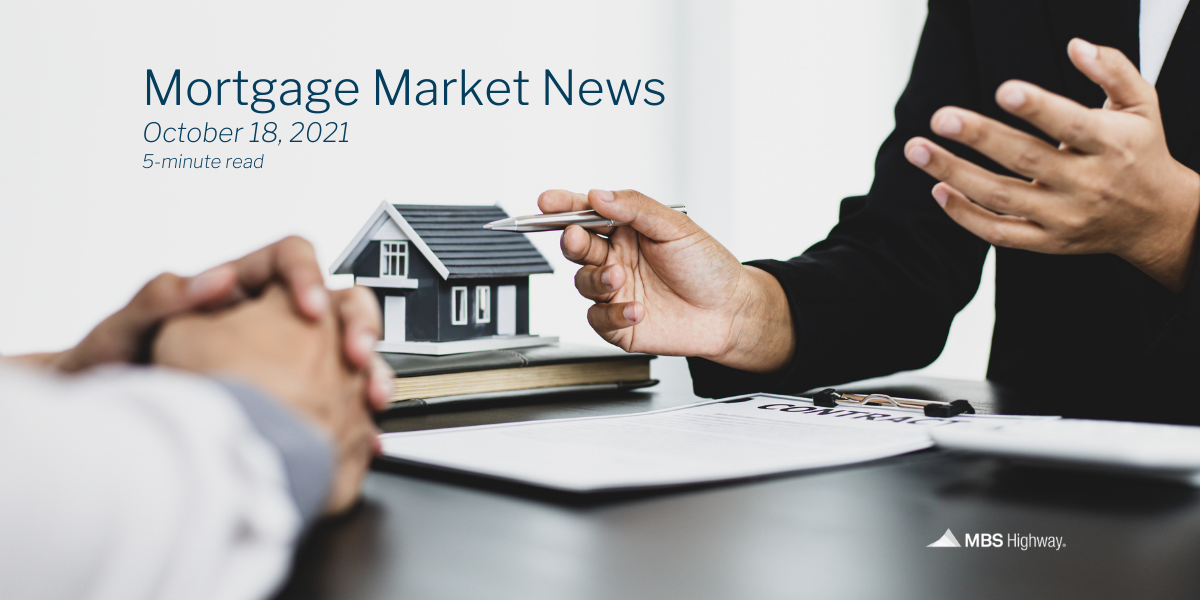 After the markets were closed Monday for Columbus Day, inflation data, employment news and the Fed minutes made plenty of headlines.

What May Be Ahead for Consumer Inflation

The Consumer Price Index (CPI), which measures inflation on the consumer level, rose by 0.4% in September, coming in slightly higher than expectations. The year over year reading increased from 5.3% to 5.4%.

Core CPI, which strips out volatile food and energy prices, was in line with expectations, rising by 0.2%. On a year over year basis, Core CPI remained at 4%.

Within the report, rents rose 0.5% in September and 2.4% on a year over year basis, up from 2.1% reported in August. Note that the CPI report is not capturing the increases we are seeing in many other rent reports that are showing double digit increases year over year. We may see some catch up in this CPI data in future months but for now the reporting continues to be dragged down by their methodology.

Inflation is critical to monitor because rising inflation reduces a Bond’s fixed rate of return. In other words, inflation can cause Mortgage Bonds to worsen or lose value and the home loan rates tied to them to rise. Though many factors influence the markets, it will be especially important to monitor inflation data in the months ahead.

The Producer Price Index, which measures inflation on the wholesale level, rose 0.5% in September and 8.6% on a year over year basis. This is up from the 8.3% annual reading in August and a new record high.

Core PPI, which strips out volatile food and energy prices, rose 0.2% in September and 6.8% on a year over year basis. While the Core annual reading was lower than expectations, it is still up from the 6.6% reported in August.

Wholesale inflation continues to move higher, which can lead to hotter consumer inflation levels if producers pass those higher costs on to consumers.

On a related note, Cass Freight showed that shipping costs were up 31% year over year in September, which accelerated from 27% in August. This can certainly lead to more inflation. President Biden announced last week that some of the shipping ports were going to run 24/7 to try to alleviate supply chain issues. However, if there is not enough trucking capacity and drivers, the containers will still just sit on the ground.

The minutes from the Fed’s September 21-22 meeting were released and they showed that Fed members collectively thought a gradual tapering process for their purchases of Mortgage Backed Securities (MBS) and Treasures was appropriate. These purchases have been ongoing to stabilize the markets.

The Fed did change their tune regarding inflation, noting they believe it will stay elevated in 2022, with the risk to the upside. Most also saw substantial further progress towards maximum employment. These are the Fed’s two benchmarks for tapering.

Fed members thought that tapering could begin as soon as mid-November to mid-December. This likely means that, barring any huge economic developments, the Fed will announce tapering at their November 3 meeting and may begin reducing their purchases in December, before the end of the year.

Once the Fed begins tapering, they are expected to reduce their purchases by $15 billion per month. This would mean that if they began tapering in December, they would be done with their purchases by the end of June 2022. Even with tapering, these ongoing purchases means their policy remains accommodative. Plus, they are also buying $60 billion per month in MBS through their reinvestments of their holdings. 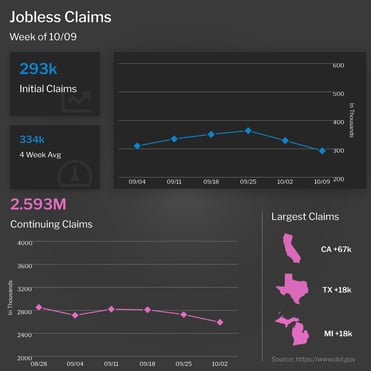 The number of people filing for unemployment for the first time fell 36,000 in the latest week, as Initial Jobless Claims were reported at 293,000. This is the first reading beneath 300,000 since before the pandemic began.

Continuing Claims, which measure people who continue to receive benefits, also fell by 134,000 to 2.6 million.

The federal COVID plans, including the Pandemic Unemployment Assistance and Emergency Claims, declined by almost 290,000 as those plans continue to expire. Extended Benefits also dropped by nearly 170,000.

There are now 3.6 million people in total receiving benefits, which is down over 520,000 from the previous report. The Claims picture continues to make significant improvements.

The 10-year Treasury Note auction was met with above average demand. The bid to cover of 2.58 was above the one-year average of 2.45. Direct and indirect bidders took 88.8% of the auction compared to 79.7% in the previous 12. The 30-year Bond Auction was met with strong demand. The bid-to-cover of 2.36 was well ahead of the average over the past 12 months of 2.32, with indirect bidders taking down 70.5 of the auction compared to the average 63.0%. This helped push yields lower and Mortgage Backed Securities higher following the results.

Retail Sales were stronger than anticipated in September, rising by 0.7% versus the expected 0.1% decrease. Sales in August were also revised higher from a gain of 0.7% to a gain of 0.9%. Yet even though consumers spent more than expected last month, the National Federation of Independent Business (NFIB) Small Business Optimism Index fell 1 point to 99 in September, which is the weakest reading since March.

The biggest concern of small businesses is their inability to meet demand due to a lack of workers and ongoing supply chain issues. In fact, it was reported that 4.3 million people quit their jobs in August, which is 3% of the workforce and the highest level on record. Food and retail industries were especially hit hard, with almost 7% of restaurants, bars and hotels and 5% of retail workers leaving.