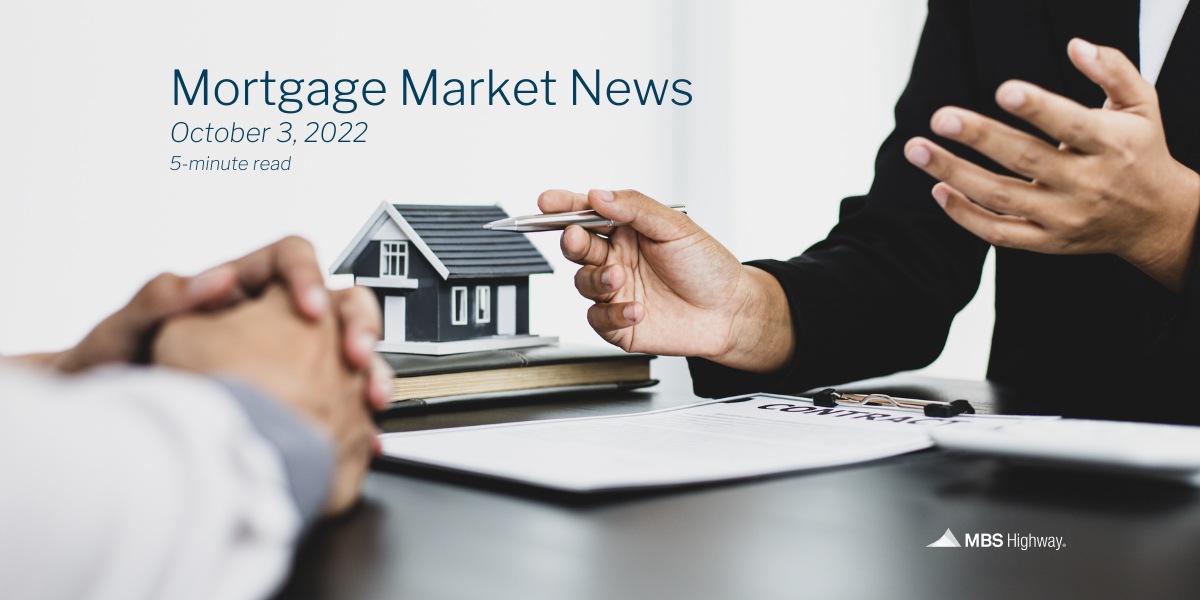 It was a roller coaster week in the markets, filled with reports on inflation, GDP, home sales and home price appreciation. Here are the key details:

The Fed’s favorite measure of inflation, Personal Consumption Expenditures (PCE), showed that inflation rose 0.3% in August, which was higher than expectations. The year over year reading declined from 6.4% to 6.2%. Core PCE, which strips out volatile food and energy prices, rose by 0.6% with the year over year change rising from 4.7% to 4.9%.

What’s the bottom line? Note that when the Fed says they want to see inflation fall to around 2%, they are talking about annual Core PCE, which is now at 4.9% and quite a bit higher than the Fed’s target. But there is some hope that inflationary pressures could begin easing. There have been reports of over-inventories from companies, which could lead to lower costs for some goods.

Plus, inflation is calculated on a rolling 12-month basis, which means that the total of the past 12 monthly inflation readings will give us the year over year rate of inflation. For example, when the data for August 2022 was released last week, it replaced the data for August 2021 in the calculation of annual inflation. Inflation readings after September of last year are higher comparisons, so if we see lower monthly readings this fall, the annual rate of inflation could then move lower. 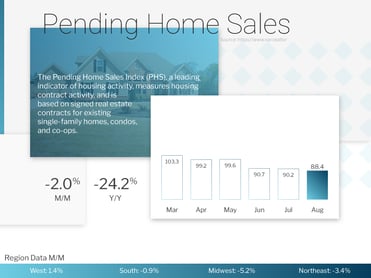 Pending Home Sales fell 2% from July to August, which was in line with expectations and marks the third consecutive monthly decline. Sales were also 24.2% lower than they were in August of last year. This is a critical report for taking the pulse of the housing market, as it measures signed contracts on existing homes, which represent around 90% of the market.

What’s the bottom line? Lawrence Yun, chief economist for the National Association of Realtors, noted that the sharp rise in mortgage rates we’ve seen this year have impacted contract signings. He added, "If mortgage rates moderate and the economy continues adding jobs, then home buying should also stabilize." Yun also noted that home prices have been supported by low housing inventory and almost non-existent distressed property sales, and he forecasts that prices will rise by 9.6% in 2022. 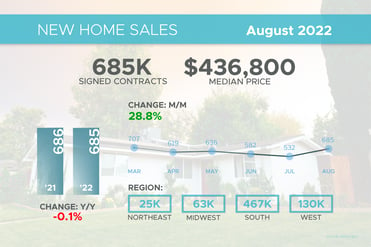 New Home Sales, which measures signed contracts on new homes, rose 29% from July to August to a 685,000-unit annualized pace, coming in much stronger than the 6% decline expected. There was also a positive revision to the July reading. Sales were essentially flat when compared to August of last year when there were 686,000 signed contracts.

The median home price for new homes was $436,800, which was a decline from July, but remember this is not the same as appreciation. It simply means half the homes sold were above that price and half were below it, so the decline could reflect more signed contracts on lower-priced homes in August.

What’s the bottom line? Buyers flooded the new home market in August since the supply of existing homes on the market remains tight. Many homeowners do not want to sell their homes if moving would mean a much higher interest rate on a new loan.

There were 461,000 new homes for sale at the end of August, which equates to an 8.1 months’ supply. However, only 49,000 or 10.6% were actually completed, with the rest either not started or under construction. The amount of completed homes equates to less than one month’s supply, well below the six months’ supply that is considered representative of a balanced market. 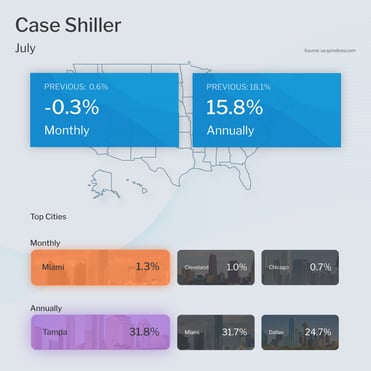 The Case-Shiller Home Price Index, which is considered the “gold standard” for appreciation, showed home prices fell 0.3% in July but they were 15.8% higher when compared to July of last year. This annual reading is a decline from the 18.1% gain reported in June but still strong.

The Federal Housing Finance Agency (FHFA) also released their House Price Index. This report measures home price appreciation on single-family homes with conforming loan amounts, which means it most likely represents lower-priced homes. Home prices fell 0.6% from June to July but they rose 13.9% from July of last year. This is a decline from the 16.2% annual increase reported in June, but again still solid on an annual basis.

What’s the bottom line? While Case-Shiller’s national index did show a month over month decline, the majority of the decline was seen in a few large cities and it was not widespread. For example, San Francisco, Seattle, San Diego, Los Angeles and Denver all showed steep declines from June to July, but they were also some of the cities that saw large price gains when compared to July of last year.

The final reading of second quarter GDP came in at -0.6%, which was in line with estimates and the same as the second reading. It’s now confirmed that we have had two consecutive quarters of negative GDP, with -1.6% in the first quarter and -0.6% in the second quarter.

What’s the bottom line? Since 1947 a recession has been called every time we have seen two consecutive quarters of negative GDP. The National Bureau of Economic Research (NBER) has not yet classified this as an official recession, as they want to see economic contraction that meets their three criteria of depth, duration and diffusion. However, given the lag time for releasing economic data, they often officially announce a recession looking backwards months after it began.

In addition, the Atlanta Fed has revised their estimates for third quarter GDP significantly lower, from 2.6% a month ago to just 0.3%. If third quarter GDP ends up negative as well, it would certainly be hard for the NBER to ignore three consecutive quarters of negative GDP as they’re making a determination about recession. 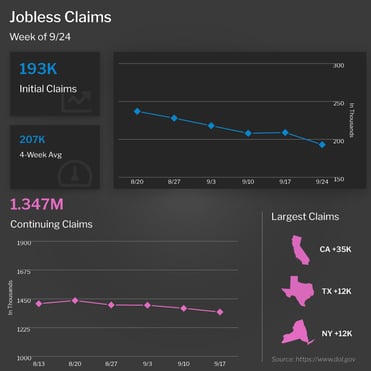 The number of people filing for unemployment benefits for the first time fell by 16,000 in the latest week, as 193,000 Initial Jobless Claims were reported. This is the lowest level since May and the previous week’s filings were also revised lower by 4,000. Continuing Claims, which measure people who continue to receive benefits after their initial claim is filed, also decreased by 29,000 to 1.347 million.

What’s the bottom line? These are extraordinarily low numbers in the face of productivity and GDP being down along with elevated inflation and the unemployment rate moving higher. This could be a sign that employers are reluctant to let go of workers for fear of not being able to replace them.