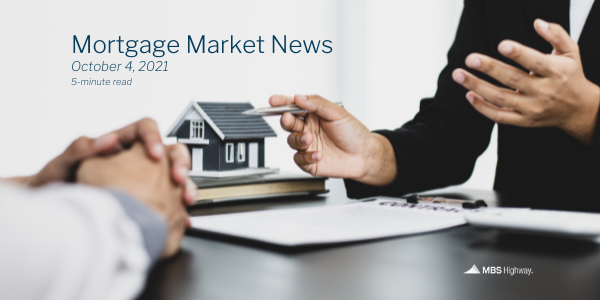 The last week of September was jam packed with news on housing, inflation and jobless claims. 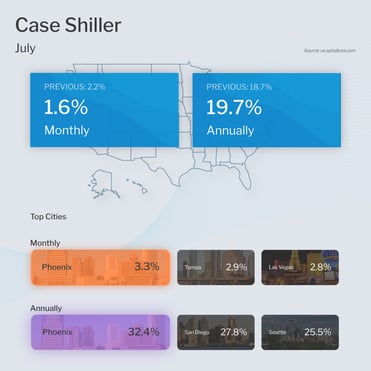 The Case-Shiller Home Price Index, which is considered the “gold standard” for appreciation, showed home prices rose 1.6% in July and 20% year over year.

The 20-city index also rose 20% year over year, with all the cities showing strong gains. 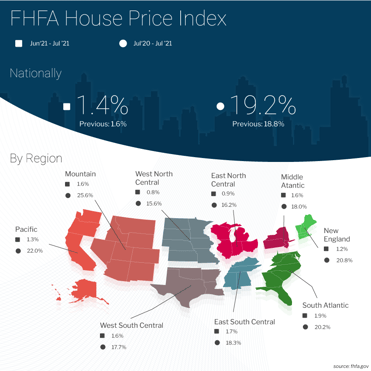 Home prices rose 1.4% in July and they were also up 19% year over year. This is the first time in recent memory that we have seen FHFA’s data below Case Shiller’s.

This dynamic shift could mark the peak of year over year appreciation gains. While monthly appreciation gains are still expected to occur, they could start to slow and this would make the year over year figures start to come down a bit. It’s important to note this does not mean home prices are expected to decline because there is still too big of a crop of homebuyers for too few homes. But the pace of gains could slow.

Rents are also rising at a feverish pace. Apartment List reported that rents rose 2.1% in September and 16.4% year to date, up from 13.8% in the previous report. This is the fastest rent growth on record and is on a 22% pace if these increases continue. To put this into context, rents from January 2017 to September 2019 averaged just a 3.4% rise. In addition, only a few cities remain cheaper than they were pre-pandemic, while 22 cities have increased more than 25% from the start of the pandemic. 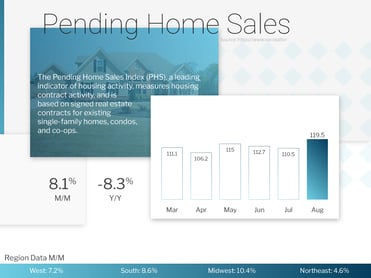 Pending Home Sales, which measure signed contracts on existing homes, jumped 8% in August, the National Association of Realtors (NAR) reported. This was much stronger than estimates of 1%.

Contracts are 8% lower compared to August of last year, though this is still pretty good considering the lack of inventory and tough comparisons to last year’s data.

NAR’s Chief Economist, Lawrence Yun, noted that rising inventory and less pricing pressure is accounting for the surge. Given the strong demand for housing the simple fact remains that if there were more homes for sale, there would be more sales.

What’s Ahead For Inflation?

The Fed’s favored measure of inflation, Personal Consumption Expenditures (PCE), showed that headline inflation was up 0.4% in August, which was slightly hotter than expectations. Year over year the index rose from 4.2% to 4.3%, which is the hottest reading in 30 years.

Core PCE, which strips out volatile food and energy prices and is the Fed’s real focus, was up 0.3% in August while the year over year reading remained at 3.6%.

This means if we continue to see monthly readings of 0.3%, we would see the year over year Core PCE reading climb by 0.8% to somewhere around 4.2% or 4.3%, depending on rounding. The bottom line is that inflation does not appear to be as transitory as the Fed would like.

On that note, 224 S&P 500 companies mentioned inflation in their second quarter calls. And last Wednesday, Fed Chair Jerome Powell changed his tune a bit, saying that he still expects inflation to ease eventually, but that the current pressures are going to run into 2022. 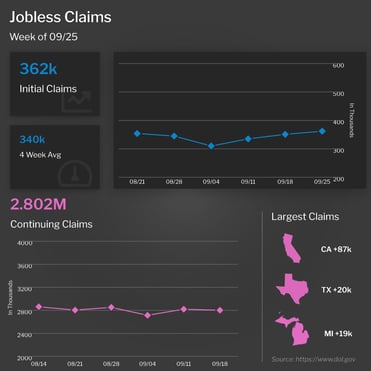 Initial Jobless Claims moved in the wrong direction in the latest week, as the number of people filing for unemployment for the first time rose by 11,000 to 362,000.

However, the number of people continuing to receive regular benefits did decline by 18,000 to 2.8 million.

Yet, the real story is that the federal COVID plans, including the Pandemic Unemployment Assistance and Emergency Claims, fell by 6.5 million as those plans expired.

There are now 5 million people in total receiving benefits, which is down over 6 million from the previous report.

The final reading of second quarter Gross Domestic Product (GDP) showed 6.7% growth on an annualized basis. This was slightly better than expectations and an increase from 6.6% in the previous reading.

And changes are coming to the Fed, as both Boston Fed President, Eric Rosengren, and Dallas Fed President, Robert Kaplan, announced their retirement.

Consumer inflation was on the rise in May, while small business owners also expressed labor and...

Sales of existing homes moved higher in June, thanks in part to some improvement in inventory....

The first week of November was filled with headlines on job creations, home price appreciation and...